All the Information about San Telmo Palace | OWAY Tours

We always hear about the Cathedral, Torre del Oro or Puente de Triana, but these are not the only monuments in the city. The San Telmo Palace is not one of the most renowned, but it is a work of art in the city centre. It impresses with its grandeur and beauty, and its warm colours complement the city. This palace completes the unique architectural style of the city of Seville.

Located in the Avenida de Roma, the San Telmo Palace has a lot of history on its facades and in all its corners, and in this article we will tell you everything you need to know about this monument. 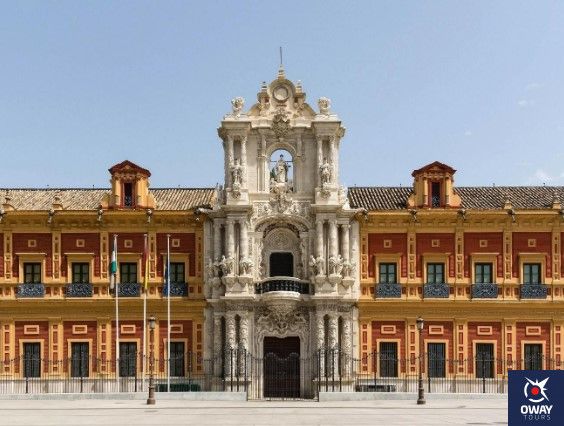 On March 10, 1682, construction work began on the San Telmo Palace. Right next to the River Guadalquivir, the first purpose of this building was to be the headquarters of the college-seminary of the University of Mercaderes. There they took in orphans and trained them as sailors. Later, the San Telmo Palace became the College of the Navy (Colegio de la Marina). The palace was built little by little, in three stages. Between 1730 and 1734, Matías José de Figueroa built the façade of the San Telmo Palace, so famous and representative of both the city and the Baroque-Churrigueresque architecture. In the San Telmo Palace you will find images of many illustrious characters. The entrance of this building has three columns on each side and, at the top, were built the images of the patrons of Seville, San Fernando and San Hermenegildo, keeping the image of San Telmo, patron saint of sailors. However, almost at the end of the construction of the palace the works were stopped due to lack of money and later, in the 1940s, two lightning bolts fell on the palace, specifically on one of the towers and on the front of the building. 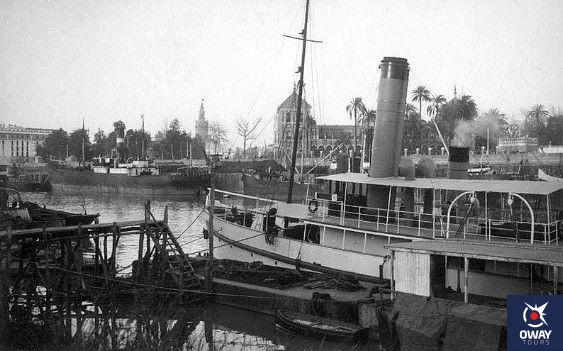 In 1849, the Dukes of Montpensier bought the building and it became their official residence. Due to this, the palace ceased to have its function as the College of the Navy. The duke invested a large amount of money to renovate the building and at this time the statues that we will find today on the wall facing Palos de la Frontera Street were built. Each of these statues represents an illustrious character of the city: Fray Bartolomé de las Casas, Fernando Afán de Rivera y Enríquez, Bartolomé Esteban Murillo, Benito Arias Montano, Luiz Daoíz y Torres, Fernando de Herrera, Diego Ortiz de Zúñiga, Lope de Rueda, Miguel Mañara, Diego Rodríguez de Silva y Velázquez, Rodrigo Ponce de León and Juan Martínez Montañés. Little by little the interior of the palace was also built: the courtyard, the chapel, among others. In the chapel we will find the image of Our Lady of Good Air, as well as other images. It is considered a jewel of Andalusian art.

In those times, the palace had many facilities inside, such as running water, bathrooms, telegraph and its own pier. After the death of the Dukes, the palace was donated to the Archbishopric and became a Seminary, which produced great modifications in the structure of the building. Later, the palace went through another unpleasant moment: a great fire destroyed a large part of its interior; all because of a chimney in the middle of August. In 1962, the palace underwent further renovations, further changing its very representative style.

The facade of the San Telmo Palace is considered one of the best buildings of the Sevillian Baroque and its colours stand out and accompany other buildings in the city.

The great curiosity about the San Telmo Palace is the amount of renovations and misfortunes that the palace went through until today. In addition, so many moments were lived inside, that we can see them reflected in its interior, in its walls and in all its corners. During the time that the building was the Colegio de la Marina, it was home to one of the city’s most renowned artists: Gustavo Adolfo Bécquer. It was there that he began his nautical studies and, according to what is said, it was there that he found his way in the world of poetry.

The homage paid by the Dukes of Montpensier to twelve illustrious Sevillians, thanks to the hands of the Sevillian sculptor Antonio Susillo, is something worth mentioning. However, only nine of these characters were Sevillians by birth, since the other three were adopted, although they lived in the capital of Andalusia. 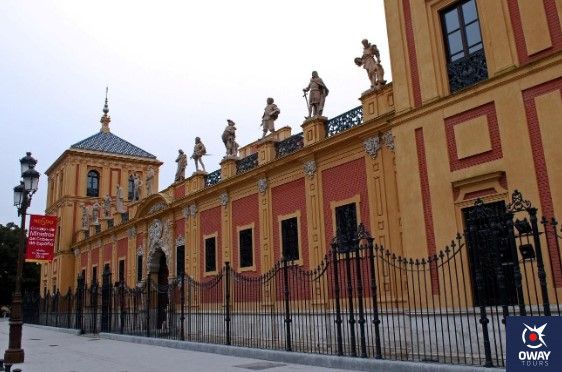 Visiting the San Telmo Palace offers us the possibility of seeing and getting to know one of the most representative buildings of Seville and Andalusia. To visit it you must book in advance online at the San Telmo Abierto website. You will need to register with your details to be able to book. You can also call (+34) 955 001 010 or send an email to santelmoabierto@juntadeandalucia.es. Click here if you want to book online. The palace is open on Thursdays, Saturdays and Sundays. 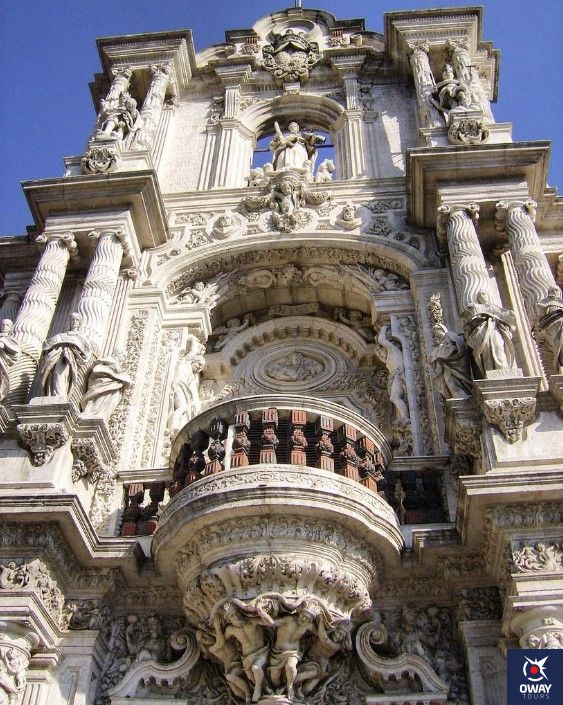 Prices for visiting the Palace of San Telmo

The best thing about visiting the San Telmo Palace is that entrance is completely free. You only must book your ticket in the page we have told you in the previous section and that is all. By offering free tickets, the Junta de Andalucía aims to encourage tourism and the possibility of visiting such special jewels as this palace. 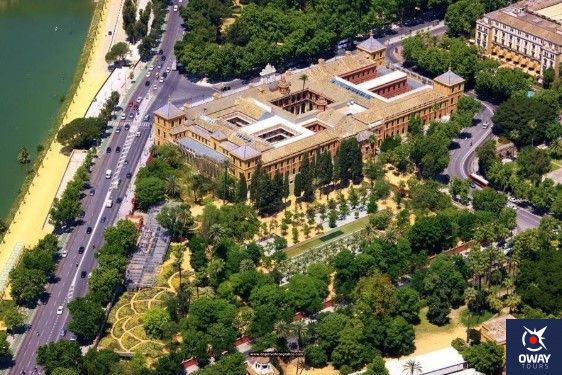 How to get to San Telmo Palace

The San Telmo Palace is in one of the best locations. Right in the centre of the city, close to the other important buildings in Seville. It is very easy to reach the palace from any point.

There are many parking lots near the Palacio de San Telmo. Specifically, there is one right on Avenida de Roma, the same location as the palace. For approximately 19 Euros you can leave your car parked in this car park and you won’t have to worry. We recommend this option and that you make your tour of the city and the palace on foot; Seville is a city that has to be explored on foot to appreciate all that it has to offer.

From the centre of the city you can make the tour on foot as well, as it won’t take long. However, there are several means of transport available, such as the tram, bus or metro. There is only one metro and tram line, so you will not get lost, regardless of where you get on the transport, you will have to get off at the Puerta de Jerez stop and continue your journey on foot; approximately five minutes. If you opt for the bus, the most suitable line will depend on your location. In the Tussam app you can find all the bus lines; you only have to enter your location and where you want to go. For example, if you decide to leave from Las Setas de Sevilla, you will have to go to the stop of Menéndez Pelayo, specifically the one in Puerta Carmona, and take bus 21 or 5 to the stop Palos de La Frontera, Puerta Jerez. After getting off, you will only have to walk a couple of minutes to the palace. 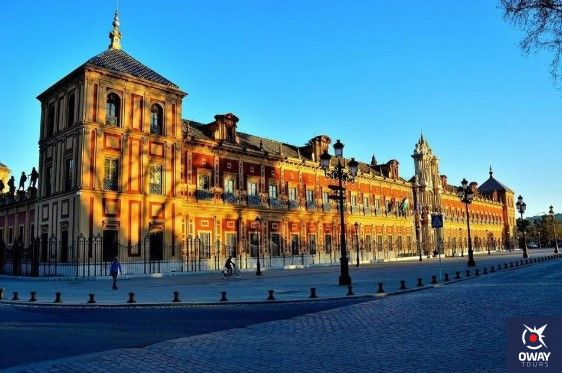