Seville has an admirable monumental offer and sometimes we do not get to know the history of each of the monuments.

Receiving thousands of tourists every year and considered of Cultural Interest and Historical Heritage of Spain, the Casa de Pilatos is one of the best Andalusian palaces. It is an Andalusian palace that perfectly combines the Mudejar style with the Renaissance style. It is covered with tiles and has impressive gardens that alone justify the visit. This palace was built at the end of the 15th century on the orders of the Adelantado of Andalusia, Don Pedro Enríquez, but was finished by his son, Fadrique, who is the one to whom the name Pilatos is due.

History of the Casa Pilatos

The construction of this palace, built on land confiscated by the Inquisition, is adorned with precious Mudejar tiles and beautiful gardens. It was begun at the end of the 15th century, at the initiative and desire of Don Pedro Enríquez, the major adelantado of Andalusia, and his wife Doña Catalina de Ribera. Most of the building was erected in the time of their son Don Fadrique, who was responsible for the house coming to be known as it is today after a pilgrimage he made to Jerusalem in 1519. On his return, tradition has it that he found that the distance between the ruins of the “house” of the famous Praetorian Pontius Pilate and Golgotha was the same as the distance between his palace and a small temple located outside the walls known as the Cruz del Campo (Cross of the Field). Surprised by the coincidence, he established a Way of the Cross with twelve stations. The first station was Jesus’ forced exit from the House of Pilate. The popular imagination helped to identify this Palace with the Praetor’s House, considering it to be a copy of the former, and so its rooms were given names related to the Passion of Christ, such as “Praetorium Hall”, “Chapel of the Flagellation”, etc. 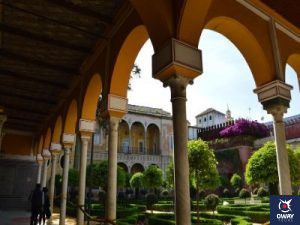 The timetable for your visit to Casa Pilatos will not be a problem as it is open to the public every day of the week from 9am to 6pm. Being the same timetable for all seasons of the year, for this reason we recommend that if you make your visit in summer go in the morning during the early hours of opening, but to better cope with the high temperatures of Seville.

A good option, if it is not too hot or if your visit is not in summer, would be to go on a Monday afternoon from 15:00 to 17:30 in the afternoon, as during this time your visit will be free for both the lower part of the house and the complete visit.

It should be noted that both tickets, both the visit of the whole house and the visit of the lower part only, include an audio guide in a wide variety of languages, including Spanish, French, English, Portuguese, German, Japanese and Italian.

In addition, you can visit for free on Mondays from 15.00h in the afternoon until full capacity is reached, without the possibility of prior reservation. In this case, the audio guide is not included, which costs 4 euros.

How to get to Casa Pilatos

The Casa de Pilatos is the largest private palace in Seville and is considered the perfect prototype of the Andalusian palace, so it is well worth a visit, as you will not be disappointed.

It is located in the Plaza with the same name, i.e. Plaza Pilatos. It is very close to well-known and emblematic places such as the Giralda, the Museum of Flamenco Dance, the Mushrooms of Seville or the Antiquarium.

You can also get there by several transport lines, these are the following. 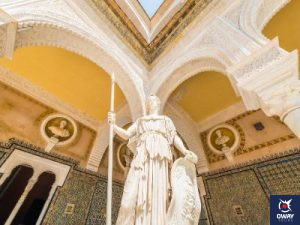