The Hospital of Venerables Sacerdotes in Seville

The Hospital of Venerables Sacerdotes in Seville is an ancient institution created in the 17th century to house elderly priests. In addition to being a place of great cultural and artistic interest, it contains the Velázquez Centre, where paintings by the Sevillian painter and other local artists are exhibited.

History of the Hospital de los Venerables Sacerdotes of Seville

The Hospital of the Venerable Priests of Seville is located in the well-known Santa Cruz district of Seville. This place was founded more than three centuries ago by Canon Justino de Neve, with the aim of taking in and caring for elderly and helpless clergymen who had finished their work for the church.

At the end of the 17th century, the hospital was built by the architects Juan Domínguez and Leonardo de Figueroa, thanks to generous contributions from the nobility, the clergy and social institutions that made it possible to create it.

Throughout its history, this building has undergone numerous transformations, until it lost its welfare function in the 1970s.

Inside, as mentioned above, is the Velázquez Centre, an institution that promotes the figure of the Sevillian painter Diego de Silva Velázquez. In addition to the exhibition of works by this painter, we can also contemplate paintings by other famous Sevillian Baroque artists, such as Murillo, Pedro Roldán and Juan Martínez Montañés.

It has now been restored by the Focus Abengoa Foundation. In addition, apart from the works on display in this space, concerts are also performed on the church’s organ. 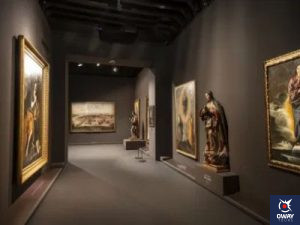 At the moment, the established visiting hours are temporary, as the current health situation means that everything has to be adapted to the development of the pandemic.

In principle, the Hospital de los Venerables Sacerdotes de Sevilla can be visited:

Tourist visits are daily except on certain public holidays, such as:

The last pass to visit this place will be 45 minutes before closing time.

To visit the Hospital de los Venerables Sacerdotes de Sevilla you can find different types of tickets, depending on the group you belong to:

In addition, if you visit on Mondays and Tuesdays, from 9:00 to 9:30, with prior online booking, admission is free. Each ticket includes a visit to the Church, Sacristy, Courtyard, Velázquez Centre and the Contemporary Art Collection.

The guided tours also include an audio guide in five languages (Spanish, English, French, German and Italian). An audio guide for children is also available in Spanish and English.

Educational visits are available one week in advance. The guided tour can be done with a guide from the foundation or with a guide from Seville. This service will be charged separately, it is not included in the ticket price.

Exterior and courtyard: the Hospital de los Venerables Sacerdotes is organised around its courtyards.

Firstly, the central courtyard, which is divided into two galleries, has the characteristics of the traditional Sevillian courtyard. It is built in limestone tones from the mixture of lime and adobe, and is surrounded by orange trees. It also has a very special fountain.

The tiles give the place a variety of colours which, when mixed together, form a multitude of geometric shapes that reflect the Andalusian heritage.

Nowadays, it is an ideal place for the performance of plays and musical events.

Church and Sacristy: since its creation, it has been used as a chapel for the celebration of the Eucharist for the sick priests who lived there.

It was built at the end of the XVII century, and is characterised by its fresco paintings on the vaults and the dome. Through its walls we can see an endless number of scenes that combine reality and fiction, for this reason it is worth a visit.

The permanent exhibition: it is located on the ground floor and is made up of some twelve works of art, especially those by Velázquez.

The library, which specialises in the Baroque era and houses an infinite number of prints with views of Seville, in addition to 30,000 volumes from the legacy of Professor Pérez Sánchez.

Lastly, past the library is a terrace. It is not known what specific use it had during the hospital years, although it is thought that it may have been used as a meat drying room. Undoubtedly, the most incredible thing about this space are the views of the Giralda. 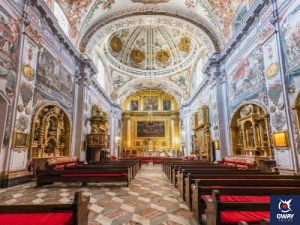 The Hospital of Venerables Sacerdotes is today the headquarters of the Focus Abengoa Foundation. This place is located in the heart of the Santa Cruz district of Seville, and although it is a long-established institution, it has gradually adapted to modern times, while maintaining its essence.

We recommend you to walk there, so you can admire the beauty of the Murillo gardens. There are two metro stops, Del Prado de San Sebastián and Puerta de Jerez, which are just a few minutes away.

On the other hand, if you decide to take a car, the nearest car park is on Paseo de Catalina de Ribera. Once there, we recommend that you visit the remains of the Jewish cemetery that once stood there. 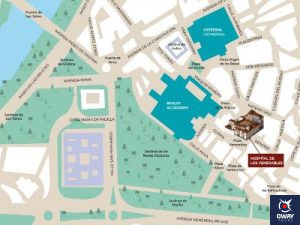 Curiosities about The Hospital of the Venerable Priests of Seville

This hospital was founded when the Hermandad del Silencio (Brotherhood of Silence) of Seville decided to care for and give asylum to the elderly and disabled. They rented a house for this purpose, and it was in 1675 that construction of the Hospital de los Venerables Sacerdotes began.

In 1840, this hospital was converted into a weaving factory, and the priests staying there had to move to other rooms fitted out exclusively for them. Complaints from the Hermandad del Silencio de Sevilla (Brotherhood of Silence of Seville) led to this place returning to its main function and the purpose for which it had been created.

The I Festival de Órgani Los Venerables has been created. Organised by the Focus Foundation and Euro-vía Festival, the main international artists at its reopening will be Stanislav Surin (Slovakia), Sergio Orabona (Italy), Susana G. Lastra (Spain), and Jean Christoph B. Orabona (France) and Jean Christophe Geiser (Switzerland). 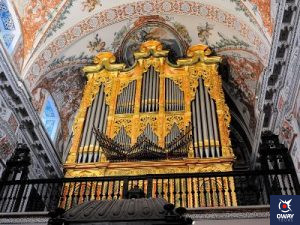