▷ All the information about the Plaza Nueva in Seville | OWAY Tours

The Plaza Nueva in Seville

In the historic centre of Seville we can find the Plaza Nueva, a strategic point of the city, as it is a commercial and administrative area, where the Town Hall of the Andalusian capital is located. With a perimeter of 500 metres and a surface area of 14,000 square metres, it is one of the typical places to visit in the city, as it hosts trade fairs, concerts, festivities and during the Holy Week of Seville many brotherhoods pass through here.

History of the Plaza Nueva in Seville

During the Middle Ages, it was a wetland, known as “laguna de la Pajería“, its water coming from a branch of the Guadalquivir river. It was accessed through the wall through the Alfareros gate. After it was drained, it was used as a cemetery in the city, and in the 13th century it was occupied by Franciscan friars, who used the land to build a large convent house, even larger than the current 500-metre perimeter of the square.

After the Napoleonic war of 1808, the convent building was badly damaged and suffered a fire that ruined it, and it was later converted into a square. From this moment on, the Plaza Nueva and all the small streets surrounding it were created.

In the centre of the square there used to be a bandstand, which was later replaced by the current monument to San Fernando.

In addition, the square has been known by different names over the course of time and events. The first name it received was Plaza de San Francisco after the convent that disappeared. Later it was renamed “Plaza de la Infanta Isabel”, with the 1st Republic, the square was renamed “República”, in 1875 with the Restoration, the Town Hall called it “San Fernando”, in the 2nd Republic it was christened “Plaza Nueva”. 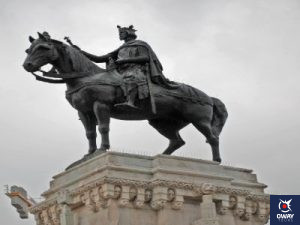 In 1936 it became “San Fernando” again, but the plaques were never changed. Finally, democracy officially gave it the name by which it had always been known: “Plaza Nueva”.

In 2006, it was almost completely pedestrianised, with benches, bicycle parking and the Metro-centre stop, which is the only public transport that can access the area. The main shopping streets, such as Tetuán and Avenida de la Constitución, also end here, and there are countless cafés and tapas bars in the surrounding area.

Construction began in the 15th century by Diego de Riaño. The building has plateresque reliefs with representations of historical and mythical characters. In its corner we can see the Cross of the Inquisition.

This small chapel shows the excellence of Baroque architecture. It is the only current remnant of the now disappeared convent of San Francisco and in it we can see a barrel vault with sash arches and lunettes and inside there is an altarpiece from the end of the 17th century.

Designed by Juan Talavera y Heredia in 1926, it is one of the most representative works of local neo-baroque regionalism with elaborate ornamentation.

The most acclaimed artists of the time, including Juan Talavera Heredia, Enrique Pérez Comendador and Joaquín Sánchez Cid, took part in the final design of the monument.

In neo-baroque style, the work of Vicente Traver Tomás, with a perfect composition and a splendid and beautiful lookout tower on the corner. Today it is one of the headquarters of the Banco de Sabadell.

One of the corporate buildings of the major institutions, it corresponds to a classicist rationalist trend typical of this period, specifically from 1950.

The Plaza Nueva itself is free to visit, but you can visit the Town Hall from Monday to Thursday, from 17:00 h. to 19.30 h. and if you are visiting Seville at the weekend you can visit it on Saturday at 10:00 h.

If you wish to visit the Chapel of San Onofre you will not have any problems regarding the opening hours as it is open 365 days a year, 24 hours a day.

The other places can be visited during normal business hours, they are places where guided tours for tourists are not carried out, but administrative procedures. But the most important of these places to appreciate are the architectural and sculptural elements that you will be able to enjoy from the square.

General admission to the Seville Town Hall will cost 4 euros. For over 65 years old the entrance fee is 2 euros and for residents and people born in Seville the entrance is free of charge.

For the visit to the chapel of San Onofre, you will not have to pay any entrance fee, only an optional offering.

How to get to the Plaza Nueva of Seville

The Plaza Nueva of Seville is located in the old quarter of Seville. It serves as a dividing line between two neighbourhoods, as the Plaza Nueva is located within the Arenal neighbourhood of Seville, while the blocks on its northern and eastern sides are within the Alfalfa neighbourhood. The streets Tetuán, Jaén and Méndez Núñez to the north; Bilbao and Madrid to the west; Badajoz, Barcelona and Joaquín Guichot to the south; Granada and the Avenida de la Constitución to the east, all of which lead to the famous Plaza Nueva.

But if the above information is not enough for you, here you can find the exact address – Plaza Nueva, 44001 Seville, Spain.

Curiosities about Plaza Nueva in Seville 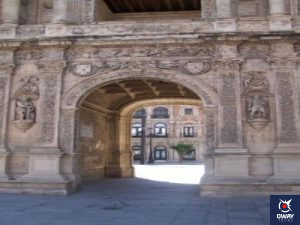