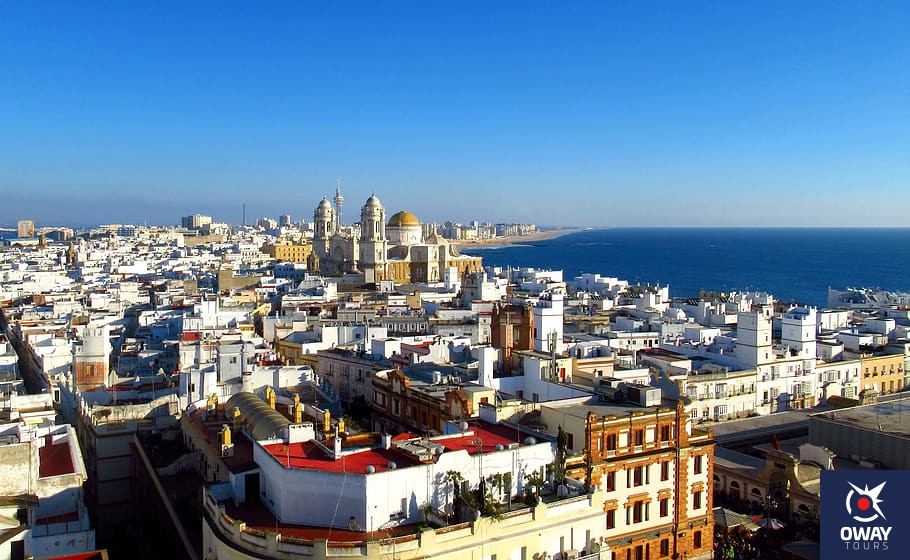 The Cathedral Square of Cadiz is located in the historic center of the city, next to the Paseo del Vendaval and Campo del Sur Avenue. It is the heart from which depart a multitude of streets such as Cobos Street, Pelota Street and the Arco de la Rosa passage, to the east; Arquitecto Acero Street, Compañía Street and Magistral Cabrera Street, to the west. The Plaza was surrounded by an ancient medieval wall of which the Arco de la Rosa, its access gate, is still preserved.

History of the Cathedral Square of Cadiz

The Plaza was created to give the Cathedral of Cadiz the splendor it deserves. Some houses were demolished to get a spacious place in front of the Cathedral to be able to contemplate it in its entirety. This urban reform began in 1721 and lasted until the middle of the 19th century.

The Plaza has an irregular plan and extends parallel to the sea, which is only a few meters away from the Plaza and the Cathedral. The entire square is surrounded by buildings with the typical white color of the Cadiz houses. A curiosity is that the pavement of the Plaza has reflected the plant of the Cathedral to scale with pieces of white marble. It is also the perfect place to have a drink and enjoy the lively atmosphere of the Plaza. 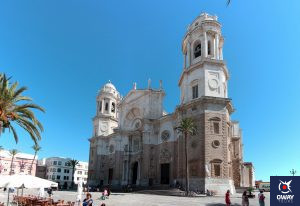 To visit the Plaza and have a more complete view of its history and its most famous buildings, we recommend you take one of our Free Tours through the monumental area of Cadiz, or “la tacita de plata”, as the locals calls it.

Main highlights in the Cathedral Square of Cadiz

The Arco de la Rosa is one of the old access gates of the Castillo de la Villa. It has this name because, over the arch, there was a small chapel dedicated to the Virgin of the Rose. The arch has been reformed by extending the height of the opening to allow the passage of carriages.

Formerly, the arch led to the Plaza de las Tablas, so called because it was there where the gallows were placed before the reform and construction of the current Cathedral Square. It is also known as Puerta de Santiago since it also gives access to the neighborhood of Santiago. 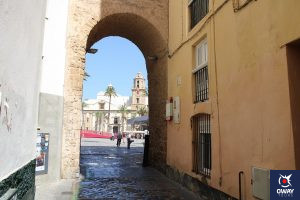 The Cathedral of Cadiz was built in the 18th century with the purpose that its towers were higher than the Giralda of Seville. However, in the end due to economic problems the work had to be finished and the towers are almost half as tall as expected.

The Cathedral of Cadiz is the “New Cathedral”, built by the architect Vicente Acero and is located a few meters from what was the “Old Cathedral”, which is now known as the church of Santa Cruz.

The Cathedral is baroque, with a Latin cross plan, three naves and ambulatory. It is inspired by the Cathedral of Granada and Guadix. What stands out most about its façade is how it fuses the forms of Italian Baroque with the Spanish tradition of the great cathedrals. Acero wanted to crown the transept with a dome of colossal dimensions, but the Cabildo did not approve his project and he was fired. 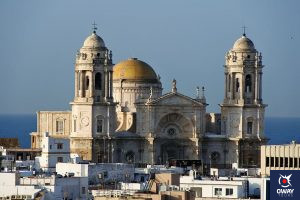 It was in 1759 when a second architect, Gaspar Cayón, made the transition from Baroque to Neoclassicism and reformed the façade. He made the towers and the dome less high than planned and crowned them with two statues.

On the OWAY Tours website you can find a guided tour of the Cathedral and the Roman Theater of Cadiz to learn even moreabout the history and monumental magnificence of the city.

The church of Santiago was built in 1563 and belonged to the Jesuit College. Around 1569, the city of Cadiz suffered numerous sackings by the Anglo-Dutch troops and the College was left in a very bad state. It now has the mannerist style of Vignola for the Gesú of Rome mixed with the typical approaches of most Jesuit churches.

It has a Latin cross plan, with a very wide transept nave and a transept with a dome on pendentives. In addition, on both sides there are several interconnected chapels that formerly corresponded to the side aisles of the church.

The Cathedral Square takes center stage during the Corpus Christi festivity. The procession of the Blessed Sacrament leaves the Cathedral and the square fills with visitors. Also, the square hosts other events throughout the year such as shows, concerts, markets… In addition, during the months of Carnival, it is very common to find groups singing from the steps of the Cathedral. 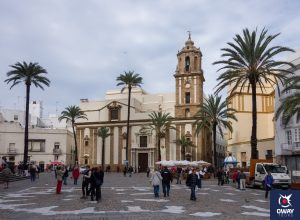