All the Information about el Gran Teatro Falla | OWAY Tours

In Andalusia, birthplace of great artists, art is one of the most illustrious aspects. That is why, since the beginning of the 17th century, there is evidence of permanent premises in the city of Cadiz for the performance of plays.

History of the Gran Teatro Falla

To speak of the Gran Teatro Falla is to speak of the cultural and artistic scene of Cadiz. Architecturally, it is a neo-Mudejar style building, both on the outside and inside. At first glance, the colourful red brick façade, the large windows with horseshoe arches and the many details in the Spanish Arabic style are striking. Its work began in 1885, on the ashes of the old Grand Theatre, which was destroyed in a fire in 1881 and was completed in 1905. Those responsible for the project were the architects Adolfo Morales de los Ríos and Adolfo del Castillo Escribano. 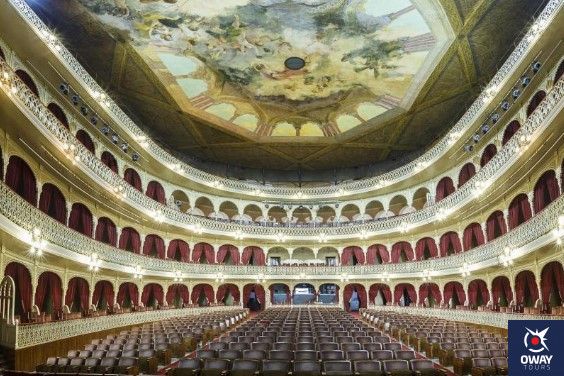 You cannot visit the city without knowing in detail one of its most emblematic symbols.  The entrance to the public of the building is allowed whenever a function is carried out by acquiring the corresponding tickets or by means of a guided tour. The ticket office is open from Tuesday to Friday from 11:00 am to 2:00 pm and from 6:00 pm to 9:00 pm. However, the best way to get to know the Gran Teatro Falla in depth is to book a guided tour in advance to guarantee your place. The visit lasts approximately two hours and includes a brief tour of the theatre’s history, as well as a visit to the dressing rooms, the stalls and its highest part, known as “el paraíso”, a name that comes from the great canvas by the artist Felipe Abarzuza y Rodríguez de Arias, which covers the entire ceiling of the theatre and represents an allegory of Paradise. In addition, you can sing and dance on the boards of its huge wooden stage and even feel like a judge for a moment from the box that the jury occupies during Carnival.

Regarding the price of the visit, it is usually 15 euros per person. The price includes a wine and tapas tasting in one of our famous taverns in Cadiz. Entrance for children under 12 is free and, in the case of a group of people, there will be a special price which can be consulted at the time of booking.

The main points of sale for tickets are the City Expert kiosks in Cadiz, located in the Plaza de San Juan de Dios, the train station and the Hotel Occidental Cadiz (Barceló). You can also make your reservation online at reservas@1d3milhistorias.com

The starting point of the visit is the Plaza de San Juan de Dios, in front of the statue of Moret.

In the Gran Teatro Falla, a wide variety of works related to the performing arts, including theatre, film, music and dance, are performed throughout the year. 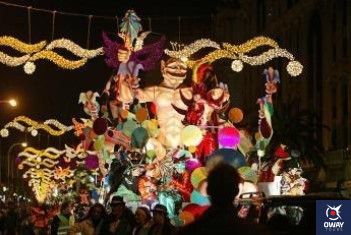 However, its high point takes place in February, when the theatre hosts the Concurso Oficial de Agrupaciones del Carnaval de Cádiz, one of the city’s most popular and deep-rooted events, in which the various carnival groups display all their art and genius in various forms.

It is a festival in which various groups of citizens in costume express current events with satire. For a week, dozens of groups display their ingenious repertoires in the streets of Cadiz to the delight of citizens and visitors.

The Gran Teatro Falla is also one of the venues for the various festivals held in the city. On the one hand, the Festival Iberoamericano de Teatro de Cádiz, a theatre festival that has been held annually since 1985 in the month of October, should be highlighted. On the other hand, Alcances, Festival de Cine Documental de Cádiz held from the end of the 1960s to the present day. Today, Alcances occupies several days in September and is characterized by its support for short films and documentary films and maintains parallel activities such as presentations of books on film, exhibitions, tributes to outstanding authors, etc. 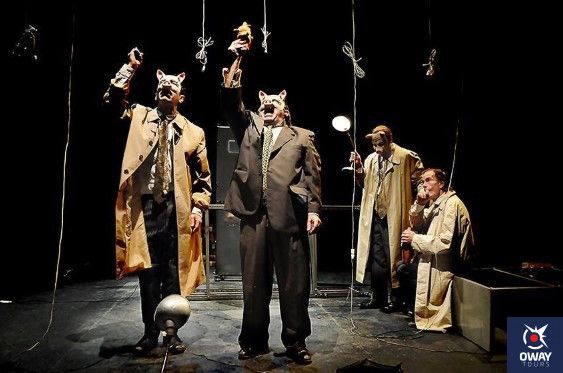 How to get there?

Are you wondering how to get to Gran Teatro Falla? We have the answer!

The building is in Plaza Fragela, in front of the Casa de las Viudas and next to the Faculty of Medicine of the University of Cadiz.

There are various means of transport you could use to get there: bus, train or ferry. The closest stops to Gran Teatro Falla are:

The train lines that stop near the Gran Teatro Falla are C1 and MD.

The ferry lines that stop near the Gran Teatro Falla are: C1 and MD: B-065.

As you know, parking in Cádiz is a dilemma. However, if you decide to bring your own vehicle, you will not have to worry about parking, as there are 4 car parks near the Theatre: Valcárcel, El Tenis (the closest), Santa Catalina and Santa Bárbara.

Curiosities about the Gran Teatro Falla

Below, we will give you some essential tips that you should know to enjoy a session at the Gran Teatro Falla.

4.During the performances, it is not allowed to record or take pictures.

5.It is forbidden to eat inside the theatre.

It is said that the theatres in the city of Cadiz are spaces where we can relax, see magnificent shows, listen to good music and, above all, feel like in our own living room. Cádiz theatres are stages where dreams come true. 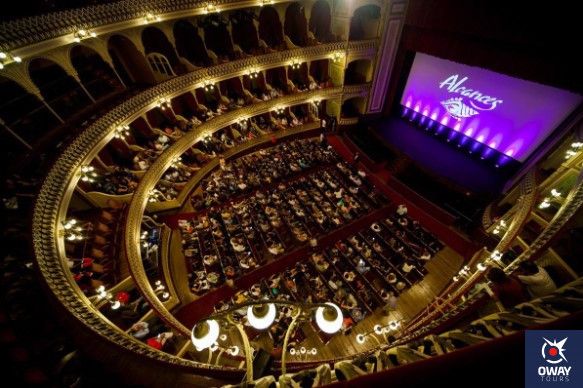