All the information about The Sacromonte Abbey | OWAY Tours 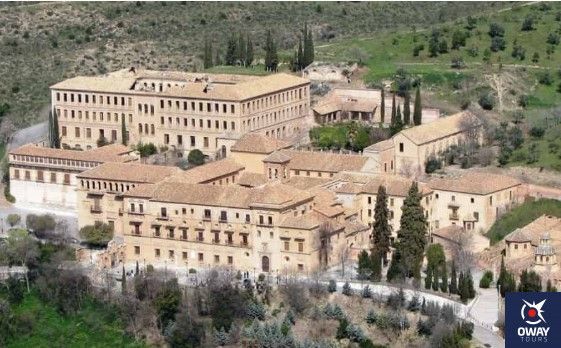 Located on Mount Valparaiso, once the Sacromonte district is finished, we can locate this imposing and wonderful monument, a great religious complex that was built on the remains found of the martyr St. Cecilio, a figure of vital importance in the history of Granada.

It was in 1595 when excavations in some old Roman ovens located on Mount Valparaiso brought to light the remains of St. Cecilio, the martyr and patron saint of the city of Granada, a disciple of the Apostle Santiago. From this episode onwards, a strong wave of pilgrimage took place to this spot, with thousands of citizens from Granada coming to venerate the first bishop of the Roman era.

After this event and due to the massive mobilization that arose, it was decided to built an abbey on the remains of this saint, both to preserve it in optimal conditions and to be able to receive the large number of visitors who came to this important enclave of the city. At the same time, lead plaques with inscriptions in Arabic dating from the 16th century were discovered in this same place and are known The Lead Books.

The importance of the discovery of The Lead Books lies in the uniqueness of these plates, since does not exist many inscriptions of this type nowadays. These books represent an attempt by the Moors to save their lives during the Christian persecutions, so they made up a divine revelation that gave the go-ahead to the religious union between Christianity and Islam. Finally, the Vatican ended up denying the content of this work, although its historical importance is undeniable. 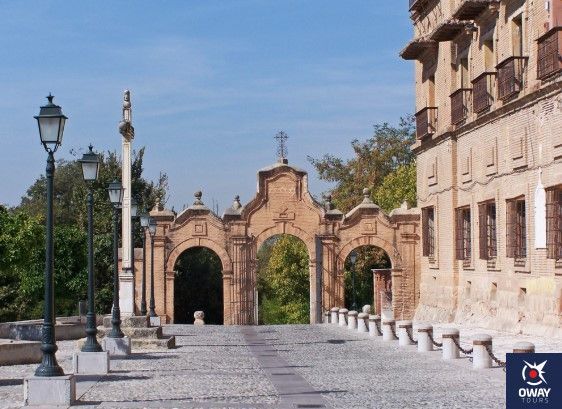 Between 1595 and 1597, when the first excavations that brought to light the remains of the saint, the group of The Holy Caves appeared, delimited by a brick wall with curved battlements and decorated with stars, circles, flowers, the founder’s coat of arms and the year of its construction: 1598. In the Holy Caves we can find an altar with two images made in wax on its sides, coming from Rome and placed in the year 1843. Going down the stairs that are located under the altar, we go to the different chapels that make up the Holy Caves: the chapel of La Dolorosa, the chapel of Santiago (where, according to tradition, the first mass in Spain was celebrated by the Apostle Santiago), decorated with an altarpiece from the end of the 17th century, the Stone chapel, so called because of the existence of a huge rock in the centre of it, and a last little chapel where the oven where the martyrdom took place was located, protected by a grill and, behind it, a bust of St. Cecilio and the Cross that St. Juan de Dios carried when he begged in Granada adorn this last room. Next to these caves we can find the cemetery of the canons. 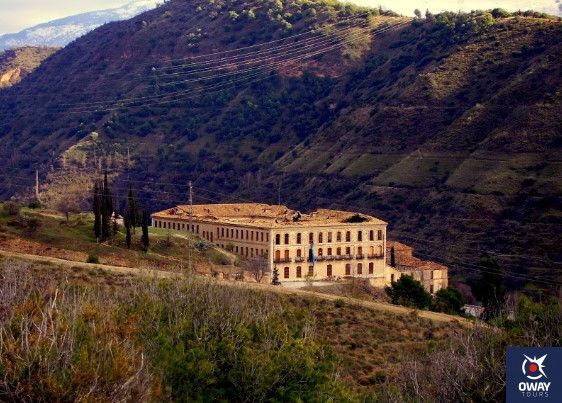 The abbey, built at the beginning of the 17th century, was of great importance as a cultural and religious complex. However, it suffered a successive decay that prevented its correct conservation and dragged the loss of the Sacromonte, whose last remaining testimony is the cross erected by the Franciscans. The work was commissioned by the Archbishop of Granada, Pedro Vaca de Castro y Quiñones, to the architect and Jesuit Pedro Sánchez. It took as a reference the monastery of El Escorial and, after the bishop’s death, the financing was cut, so it wasn’t finished as the plans of the building that are preserved in the library indicate.

Among its elements, the cloister is the most outstanding of the whole. With galleries on all four sides supported by Tuscan columns on which semicircular arches rest, in the spaces between these are decorative roundels with coats of arms of Castro and stars of Solomon. On the upper floor there are rectangular openings between pilasters. The lower body is made of stone, while the upper one is made of brick, offering a play of colours of the most attractive. In the centre of the cloister there is a large fountain.

The church of the abbey is dedicated to the Virgin of the Assumption. Initially it was to have a single-nave floor plan, but from the 18th century it was extended and a Latin cross floor plan with three naves, a main chapel, a transept and a choir was planned. The central nave is covered by barrel vaults, while on the sides we find groin vaults. In the choir, a very striking element, we find a great decorative wealth, and was made by Francisco Diaz del Rivero between 1615 and 1617. The altarpiece of the main chapel has been attributed to the artist Blas Moreno, and among its numerous sculptural manifestations, the Christ of Consolation or of the Gypsies, made by José Risueño at the end of the 17th century, stands out. 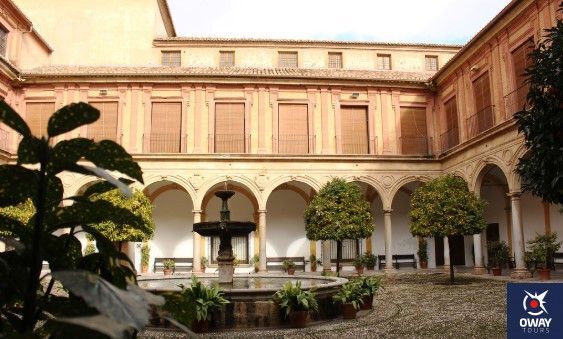 Currently, the Sacromonte Abbey houses a museum inside, which was inaugurated in February 2010. It is located on one side of the courtyard, structured in four monographic rooms, and has a permanent exhibition with works of great quality and artistic importance, such as the original manuscript of the Treatise of Medicine by Averroës, the codex made by St. Juan de la Cruz, a copy of The Nuremberg Chronicles by Hartmann Schedel, a world map made by Ptolemy, numerous manuscripts from various disciplines, such as Religion, Law, Grammar or History, written in Arabic. Also, on display are various paintings by Granada authors from the 16th and 17th centuries, and the only painting by Goya that is preserved in the city of Granada. In addition, the museum of the Abbey also has the important and famous Christ of the Gypsies.

It also houses different cult objects, tapestries, and a collection of historical clothing. The already mentioned Lead Books are also preserved here, as well as different plates destined to the printing of engravings, as is the case of the Platform of Granada by Ambrosio Vico. We can also find different sculptural works of great beauty and importance, such as The Calvary carved in ivory attributed to the school of Alonso Cano, an Immaculate by Pedro de Mena, The Good Shepherd by José Risueño or The Virgin with the Child by Duque Cornejo.

To visit Sacromonte Abbey, prices range from 5 to 2 euros, including free tickets for children under 10 years of age accompanying adults. The guided tour costs 5 euros, while for people with reduced mobility the price drops to 2 euros. 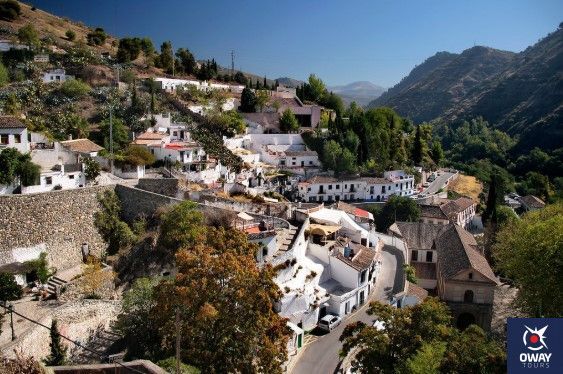 How to get to Sacromonte Abbey

The Sacromonte Abbey is a little far from the historic centre of Granada, so although the walk there is very beautiful, we recommend using public transport, as it is at the end of the Sacromonte district. Some of the options to get to the Abbey are the following: by bus you can take the C34 line from Plaza Nueva, the time between one bus and another is about twenty minutes. On the other hand, we can go by taxi if we prefer. The ideal way is to take it from the Alhambra, from where the journey can cost us the modest price of 5 euros. If what we want, on the other hand, is to use our private car to transport us to the Abbey, we can access it by the Camino Viejo del Fargue, leaving by the detour to the left towards Carretera de la Abadía.

As we have already mentioned, the walk there is very beautiful, so we recommend that, once you have visited the Abbey, you take the path from it to the centre of Granada, which is downhill and will not tire the visitors as much as if it were the other way round. The walk takes about thirty minutes, and will pass by the Sacromonte, the Albaicin and the Carrera del Darro, three essential points to visit if we are in the city of Granada.

With the discovery of the martyr’s remains in 1595, many workers belonging to different guilds of craftsmen raised about 1,200 crosses in the area as a sign of devotion to the relics found. However, at present only five of these crosses remain. Some of them were donated to the Franciscans in 1633, as they were in charge of carrying out the Way of the Cross that linked the city to the Sacromonte, and this ended up in a small chapel dedicated to the Holy Sepulchre, turning the place into a very important pilgrimage centre.

Another interesting fact is to discover the origin of Sacromonte’s name, since in the Muslim period this mountain was called Valparaíso. This change took place after the discovery of the Lead Books, which caused a great commotion and Pope Innocent XI ended up denying their authenticity. Tradition has it that, in the catacombs which are now part of the Sacromonte Abbey, approximately eleven people were burnt with quicklime and became holy martyrs.

At present the abbey is open for visits by tourists, and is exhibited as a museum, since it contains numerous books and documents of immense historical value, with more than thirty thousand volumes.

The emblem of the Sacromonte Abbey is the Star of David, a symbol that covers all the elements that make up this monument. This creates great doubts in the visitor since the place is Christian. This symbol that relates the abbey with the Jewish religion is since, originally, Solomon’s seal alluded to wisdom. For that reason, this icon appears as an element that is repeated continuously, whether it is carved in stone, embroidered in cloth, or forged in iron.