The best places to have breakfast in Seville

All the information about the Mirador Towers in Cádiz 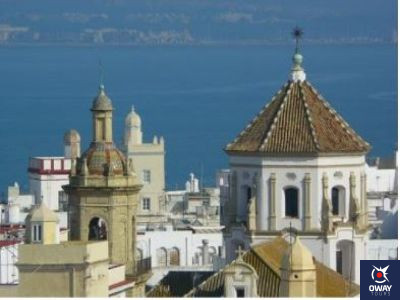 Cadiz is considered one of the oldest cities in the world. For this reason, its streets hold some of the most incredible corners that are an obligatory stop for all the visitors that come to this beautiful Atlantic city.  But are there only wonders to be seen at ground level? The answer is clear: No. On the roofs of Cádiz, you can find one of the essential mysteries to know the history of this city. Cadiz was one of the most important ports after the conquest of America, hence the importance of the “Cádiz highlands”. If you still do not know what we are talking about, we invite you to continue reading this article to finish learning about the history of this small corner of Andalusia.

What are the Mirador Towers of Cadiz

As their name suggests, these towers are distributed throughout the historic centre of the city of Cadiz. The very narrow streets of this area turned the rooftops into a place for family recreation and play where you could sunbathe and enjoy the views of the Atlantic.

In addition to this use, the head of the family took advantage of this place to watch over the maritime traffic with his spyglass, as many people had commercial interests with the Indies.

This increasingly popular use would lead some merchants to build a permanent and roofed observatory to protect themselves from bad weather and to be more unnoticed.

Similarly, other merchants copied this practice until it became a peculiarity of the roofs of the city of Cadiz.

All of them can be seen from the most remote streets of the city of Cadiz. Together with our Cadiz Free Tour, these towers will be one of the protagonists that will not go unnoticed. 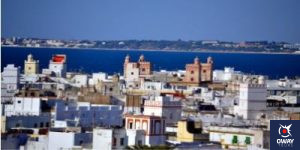 When were the Mirador Towers in Cadiz built?

The first towers were built in the second half of the 17th century, some of which are still standing today.

The oldest of all, which is located in the also oldest quarter (El Pópulo), are those that finish off the façade of the Casa del Almirante and which were ordered to be built in 1685.

But it was not until the 17th century that the great boom in these viewpoints began. Cadiz generally became a commercial city due to the great flow of the Indies and the transfer of the Casa de la Contratación to Cadiz in 1717.

Not only did the people of Cadiz end up with these towers, but also the Genoese, Basques and Flemish who settled in the city copied this form of construction.

The travellers who came to the city across the Atlantic found hundreds of flags and pennants crowning these watchtowers and giving a sensation of colour that attracted a lot of attention. These tops of the towers were a sign of the power of the porters to the Indies, who owned the houses. 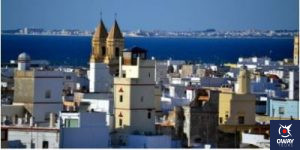 Consult all the information about this incredible city and everything it holds between its streets at the following link:

Types and characteristics of the watchtowers

Not all lookout towers have the same shape or structure. They are grouped into three main groups: terrace, armchair and sentry box. There is a fourth type which consists of a mixture of the armchair tower and sentry box, but only one of them has been preserved.

The terrace tower does not usually reach great heights; it is made up of two bodies and has a square floor plan.

The armchair tower manages to reach great height without causing great weight to the structure of the building. It is named after the resulting way in which its top floor is reduced by half.

The sentry box tower is the most widespread. As its name indicates, it consists of a sentry box that emulates religious and military constructions, with an octagonal floor plan. On the walls there were grooves through which the spyglass was taken out to observe the maritime traffic.

Finally, the ornamentation is based on mouldings and pinnacles with geometrical drawings in red almagra colour that give the final touch to these incredible buildings. 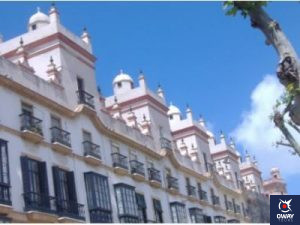 One of the best known towers is called the “Casa de las 5 Torres“, it is located in the Plaza de España and as its name indicates it is 5 houses built on the same site. Its construction dates back to 1771 and they are of baroque style. The five towers are in sentry box style and have a square floor plan, except for one which has a polygonal floor plan.

The “Casa de las 4 Torres” was built in the 18th century by Juan Clat Fragela. As a curiosity, its owner after the regulation of the restriction of towers, opened four doors to the outside to give the impression that they were 4 different buildings. This house has been declared a monument since 1976.

Another of the most outstanding watchtowers is the “Torre de la Bella Escondida“. It is located in a palace house in José del Toro street from the 18th century that shows all the splendour of that time. This tower is very different from the rest of the city as it was built for a woman, the daughter of the owner, to enjoy. This woman had entered a convent and this monument would make her feel proud of the family she had and would help her to take better the vows of chastity and obedience since it was observed from the place in the convent in Feduchy Street.

Finally, the best known of all, the Tavira Tower. It is the highest in the historical centre and was for a time the watchtower of Cadiz. From this tower, Antonio Tovira watched and controlled all the maritime traffic and also provided the weather report.

From all of them you can enjoy incredible views of the city. One of the jewels that can be seen is the Cathedral of Cadiz, a must if you visit the city. We recommend the Guided Tour of the Cádiz Cathedral, the most comfortable way to visit it. 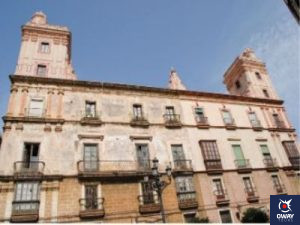