All the Information about Los Patios de Córdoba | OWAY Tours

The Festival of the Patios of Córdoba is one of the most visited attractions in the city. Cordoba is known for many festivities and traditions, but without a doubt this festival is the one that most represents the city.

The focus of the Festival of the Patios are the city’s own residents, who own their patios full of colour and the smell of flowers. They open their patios to the public so that anyone who wants to can visit them. The Festival of the Patios of Córdoba is just after the festivity of Las Cruces de Mayo and you can visit them for two weeks. In the first week there is a competition and in the second week the prizes are given to the best patios. There are two categories in the competition: ancient architecture and modern architecture. The first category includes the patios that maintain their old appearance and where no changes have been made. On the other hand, the second category includes patios that have changed their structure and have opted for a more modern look. They are decorated with colourful plants and flowers, and patios are typically white with different coloured decorations.

Although the contest lasts two weeks, you can visit them at any time of the year and perhaps it is the most recommended, as you can see them more calmly and enjoy the moment without being surrounded by many people.

Areas of the Córdoba Courtyards

The location of the Córdoba patios is divided into different neighbourhoods of the city. These neighbourhoods are the oldest in the city and here the vast majority of Córdoba’s courtyards are located. Nevertheless, it is important to say that you will be able to find many other charming places like the Calleja de las Flores, following this tradition of decorating the white walls with flowers and they will make you fall in love with this city even more.

We tell you in this article which are the areas where the Cordovan patios are located. In each one of them you will be able to find around ten different patios; we will tell you the details of the most representative ones. 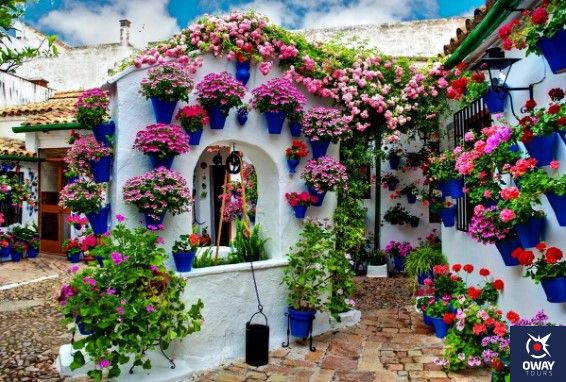 In this area you will find one of the most representative patios of the city. It is the patio located in the house number 22 of San Basilio street. It has been visited by many people, but among them it is worth mentioning the presence of the Duchess of Alba or Queen Sofia herself. Anne of Austria, the owner of this courtyard, arrived at the house in 1961 and since then shared the space with nine other families. It should be noted that the owner comes from the Royal House of Leopoldo de Austria, which adds much more value to this house.

Despite the renovations this courtyard has undergone, original parts have been kept, such as the Cordovan typical cobblestone floor. The heraldic shields of the family were added to the floor too. The well in this courtyard is of Arab tradition, which receives the same water as the fountain in the Patio de los Naranjos in the Mosque (Mezquita-Catedral) of Cordoba. On the other hand, the colours of the pots represent our wonderful autonomous community, Andalusia, with the colours green and white.

This patio has received many prizes since its first year in the competition, 1977, and most of them are due to the variety of flower species. It is one of the patios that you cannot forget to visit.

Another very important patio in this area is the one at 44, San Basilio Street. It used to be number 50 and is an example of conservation since it maintains the original architectural style. The importance of this courtyard is due to the fact that the owner of this house is the very Association of Friends of the Courtyards of Cordoba. All tourists visit this patio, as it is included in all guided tours and routes through the Cordovan patios.

Up to 13 families lived in this patio, as there were 13 rooms. Apart from the rooms, the families had to share everything else: kitchen, bathroom, well… But the patio was always the centre of the community that these families formed; there they lived together and shared many moments. However, little by little the families were abandoning this house and the Association of Friends of the Cordovan Patios (Asociación de Amigos de los Patios Cordobeses) became the owner of the house. Besides, they decided to give some life to this place. After many ideas, they decided to rent the rooms on the ground floor to local businesses, and today nothing has changed. We can find a leather workshop, pottery, fans, among others.

As far as its architecture is concerned, what is most striking about this patio is its central staircase, which is entirely white and surrounded by colourful flowers, as well as the old well that this patio preserves. There is almost no hole without flowers in this patio, and these bring a lot of colour and springtime aroma.

The patio of the house number 3 in Escañuela Street is one of those that ends the tour of this area of Córdoba and is of incredibly special value. It is the headquarters of the Cordovan Association of Friendship with Saharan Children. It is an association that organizes humanitarian aid campaigns, improving the quality of life of the most disadvantaged.

This is the second largest patio that participates in the contest and it is Mariana Grande who is dedicated to take care of it. All the pots are red, and the doors and windows are dark green, colours that contrast with the white of the wall. It is a happy and colourful patio, both for the decoration and for all the flowers that complete it and give it even more charm; jasmines, geraniums, carnations, roses, among many others. In addition, something that attracts a lot of attention in this patio is a modern fountain attached to the wall in which we find the image of the Virgin of the Anguishes in tile. This patio has also been the meeting place for many performances during the Cruces de Mayo or other times of the year.

The patio at Calle Escañuela has received many awards over the years and receives many visitors throughout the year. 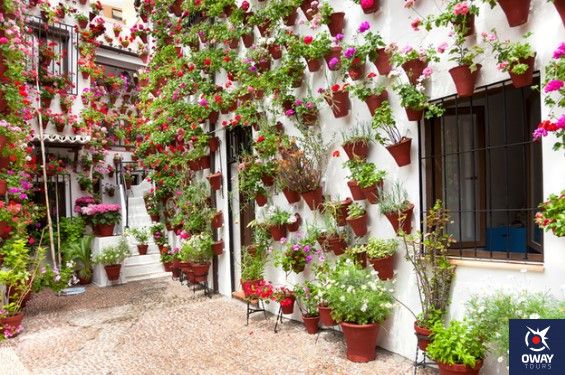 In the third area of the patios of Cordoba, we find one of the most important ones in the city and the competition, the patio of Calle Marroquíes, number 6. The special thing about this courtyard is that “patio” is not really the word that defines it; it is a series of houses decorated with flowers and vegetation, several craft workshops, such as a tailor’s shop.

The houses are terraced and, in addition, we will find an open-air room with washing facilities and a well, where clothes were once washed. Nowadays, few people wash clothes there, but it is an excellent testimony of the antiquity and gives a special value to this place. On the other hand, in this courtyard there is a huge variety of flowers and you will notice that the pots are not painted, since the neighbours prefer to give prominence to the flowers and their colours. 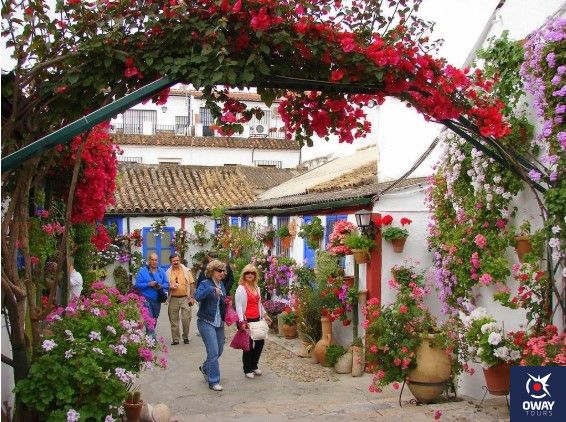 Curiosities about the Cordoban Patios

The Patios of Córdoba have maintained the tradition since the 19th century after the industrial revolution, when many people from rural areas emigrated to the city. The courtyard is considered the central and common area of the rest of the house.

The courtyard competition in Cordoba began in 1921 and these were declared Intangible Heritage of Humanity by UNESCO. The Festival is a very important date in the city, since the owners of the courtyards work all year round so that this corner of their houses looks its best and they can show them in all their splendour. 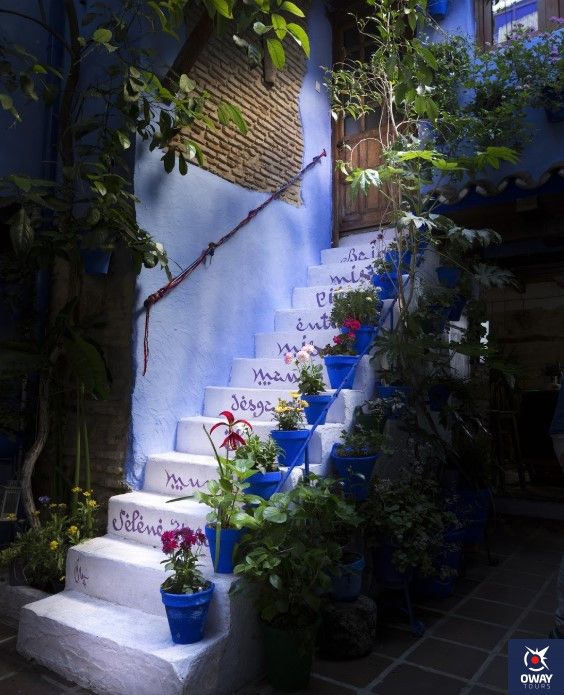 As we have already told you in the article, you can visit the patios all year round, but the recommended and best time to enjoy this tradition is during the Festival of the Patios of Cordoba. During the contest is when more patios open in the city; approximately 65 patios. Although some patios are private, there are many that are public, and they also host events and shows that attract many visitors. During the first half of May, you can visit them in the morning, from 11:00 to 14:00, or in the afternoon, from 18:00 to 22:00. The afternoon schedule ends at 22:00 due to the high temperatures during the month of May, but the best thing is that you can see the Cordovan patios in daylight, as this way you can appreciate the bright colours and all the smells that emanate.

How to get to Los Patios de Córdoba

Near the courtyard areas you can find several parking lots in case you decide to go by car. Next to the Mosque-Cathedral area, quite close to the courtyard areas of Córdoba, you will find the Paseo de la Victoria car park, possibly one of the cheapest in the area. You can also park in the surroundings of the Torre de Calahorra or in the car park of the Mosque located in Doctor Fleming street.

From the train station, you can choose to take a bus to the patio areas, specifically to San Basilio Street. You can take the lines 2, 6 and 9 near the station, concretely from Ronda de los Tejare. They pass approximately every 10 minutes and you would have to get off at the Puerta Sevilla stop. Then you will only have to walk a couple of minutes until you reach San Basilio street.