The Palace of the Moorish King

Ronda is known for its wonderful view of the river, separating the town in two and crossed by two bridges that make it possible to get incredible views, both of the city and of the Guadalevín, which crosses it. Within the rich and long history of the city of Ronda, with a great tradition and the numerous cultures that have been part of it, we find many viewpoints, palaces, and squares. One of the beautiful palaces that arouse our curiosity for its impressive appearance and interesting history is the Palace of the Moorish King, divided into three areas of great importance: the palace itself, the Hanging Gardens of Forestier, and the Secret Mine. Read on if you want to discover more about its exciting history! 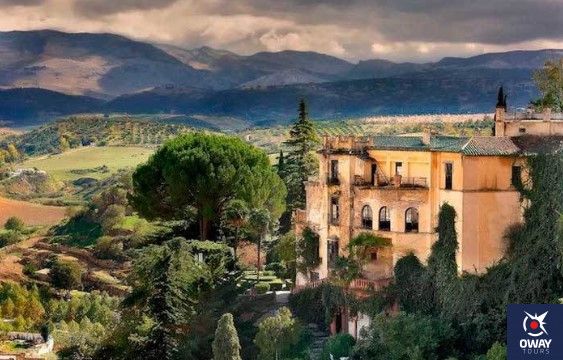 This monumental complex, located on a strip on the edge of the cliff, dates to the 14th century and continues into the 20th century. It consists of three parts: a water mine from the Muslim period, a neo-Mudejar house and a garden that was designed by the French landscape architect Jean Claude Nicolas Forestier and was declared an Asset of Cultural Interest in 1943. The whole complex covers approximately 3,700 m2, and rises over the Tajo escarpment, just on the opposite side from the Almocábar Gate and the old Alcazar.

In the 14th century, with the city under the control of the Marinid dynasty and specifically during the mandate of King Abomelic, son of the Sultan of Fez, some members of the Marinids controlled border cities of the Nasrid Kingdom, protecting them from the Castilian army and favouring the Nasrid Kingdom of Granada. Ronda was a crucial point in the defence of the kingdom, and so it was decided that it should be fortified. Thus, the water mine was created, which allowed the extraction of water from the River Guadalevin, whose waterwheel was operated by Christian slaves, who also carried the water out of the city.

During the conquest of Ronda by the Castilian army in 1485, the mine played a key role. The troops of the Marquis of Cadiz attacked the mine until they reached a weak flank, as they knew how important it was for the defence of the besieged city, as they had no other internal cisterns. They disabled the waterwheel, interrupted the water supply, and thus managed to surrender the city in a few days.

The space remained long undeveloped until the 18th century when a house was built over the mine. From 1767, it became the property of various members of the Marquisate of Salvatierra. In 1911 it was sold to the Duchess of Parcent, who completely renovated it, extending, and renovating the house in the neo-Mudejar style and commissioning the creation of the garden. The landscaper who did it was Jean Claude Nicolas Forestier, who had come to Spain to design the gardens for the 1929 Ibero-American Exhibition in Seville. 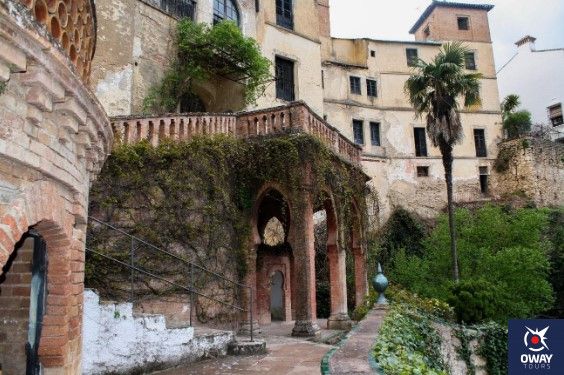 This house was built in the 18th century as, in 1911, the Duchess of Parcent, called Trinity von Scholtz Hermensdorff, took it over and turned it into an imposing and attractive neo-Mudejar style house. At present, the house is being restored and rehabilitated to allow visits again, so that entry is not allowed.

This house was the main nucleus of the monumental group that really constitutes the House of the Moorish King: a sum of several constructions. The structure of the house is the usual one of the Andalusian houses that were projected for the aristocracy, that is to say, its structure consisted of different rooms that are distributed around a courtyard and that are distributed in two heights. With the acquisition of the house by the duchess, she renewed the area of the house completely. She bought neighbouring houses, demolishing those on the east side to build a garden, while those on the west side were incorporated into the main core, and rebuilt in the neo-Mudejar style. 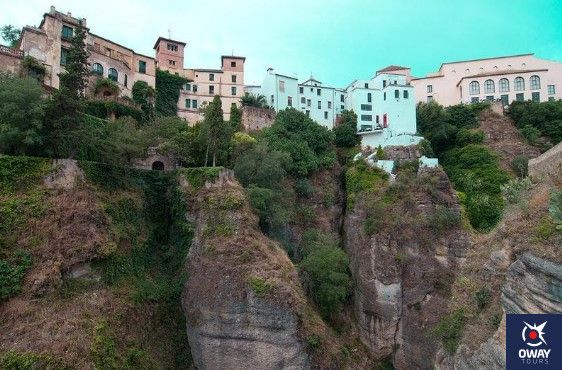 After the Duchess acquired the land where this garden is currently located, she commissioned the design from the French landscape architect Jean Claude Nicolas Forestier, who was inspired by the Spanish-Muslim garden and the French gardens for their geometry. It has now been catalogued as an Asset of Cultural Interest. This garden is reminiscent of the gardens of the Alhambra or the Alcazar of Seville because of its influence of Hispano-Muslim art, integrating aromatic and fruit plants, which are adapted to the climate of Ronda and are arranged in geometric flowerbeds, following the French landscape tradition.

It is divided into three terraces with a small difference in level between each one, linked by stairs and connected by moving water. On the upper terrace a fountain was installed that pours its water through a channel that circulates to the pond on the lower terrace. The channel has avenues for walking on the sides, and evokes the typical garden-orchard of the Islamic tradition, which develops its gardens in courtyards with ditches.

The Water Mine dates from the 14th century, from the Nazarite period, and represents one of the best-preserved examples of hydraulic engineering of the Nazarite Kingdom in Spain. It was built with the aim of improving the city’s defences, taking advantage of one of the cracks that formed naturally on the river wall. A gallery was excavated so that water could be drawn by means of a waterwheel, and in this way be safely supplied to the population in the case of a siege. In other words, this mine, along with the walls of Ronda, formed part of its defensive system.

The construction was carried out during the time of King Abomelic’s government in the city. In the descent we can locate the Waterwheel Hall, which housed the great waterwheel that served to extract the water. The gallery was very narrow and prevented access to animals, so this system was operated by Christian slaves, who carried the water and climbed up the gallery with them on their way to the city. Further down this construction was fortified by a tower, inside which we can find the Weapons Room, which housed the garrison and from which attacks from arrows or boiling liquids were repelled.

To further fortify the defence there was a well on a lower level. This was located in the Hall of Secrets, whose name is due to the sound effect produced by its dome, since a voice whispering in one of the corners is capable of multiplying its sound until it is clearly heard from another of the corners. In the lowest part of the tower there was a small door that opened to the river and served to facilitate the escape. 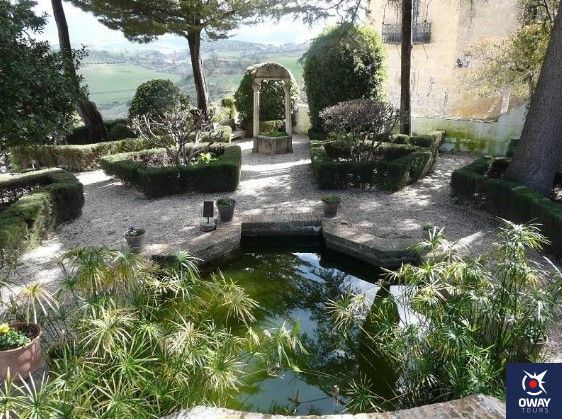 The monumental complex is located on one of the sides of the river Gualevin, saving the Tajo of Ronda, so finding it does not present any difficulty when arriving at Ronda. It is located at 9, Cuesta de Santo Domingo Street.

The first owner of the house was Jacinto Salvatierra, who had owned it since 1767 and placed a doorway in the house with the coat of arms of his lineage which, however, has not been preserved as it was destroyed. Later it would be inherited by successive relatives until the 20th century, when it was acquired by the multimillionaire Lawrence Perin, who was responsible for placing the monastic complex in the spotlight of academics and scholars of Ronda’s history and culture.

Trinidad von Scholtz Hermensdorff was the owner of the house since 1911 and decided to remodel it in a neo-Mudejar style. Neo-Mudejar is an artistic and architectural style developed in the Iberian Peninsula from the end of the 19th century to the beginning of the 20th century. It is a style that is framed within the orientalist currents of European historicist architecture. This style was related to constructions of festive and leisure character, such as salons, casinos, bullrings, and saunas. One of the great representatives of this artistic style would be, for example, Aníbal González Álvarez-Ossorio, who was the architect of the Plaza de España in Seville, built for the 1926 Ibero-American Exhibition. 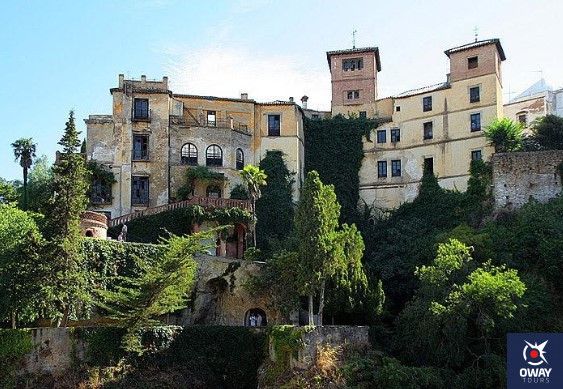 On the other hand, the neo-Mudejar style in housing became very famous in the hamlets of the new districts of Madrid, sometimes more modest and other times much more elaborate, as is the case of some bourgeois collective housing of Marqués de Cubas and Francisco Jareño. The main material of this type of building is brick, which is quite cheap, and the models of houses were reproduced from one to another, so labour was not expensive either. Unfortunately, much of this heritage has been demolished by real estate pressure.

We can easily deduce that neo-Mudejar is inspired by Mudejar art, an artistic style developed in the Christian kingdoms of the Iberian Peninsula that incorporated numerous influences in its elements and materials of the Hispano-Muslim style. The flourishing of this style derived from the coexistence of different cultures during medieval Spain, an exclusively Hispanic phenomenon that occurred during the 12th and 16th centuries, mixing various Christian (Romanesque, Gothic and Renaissance) and Muslim artistic currents at the same time, serving as a link between Christian and Islamic art.