All the information about the Granada Cathedral | OWAY Tours

It is the first Renaissance church in Spain and one of the best examples of this architectural style. For all these reasons, its history and monumentality make it one of the most important events in the city. The visit to the Cathedral allows us to combine the city’s Muslim past, represented by the Alhambra and the Albaicín quarter, with the Catholic past. 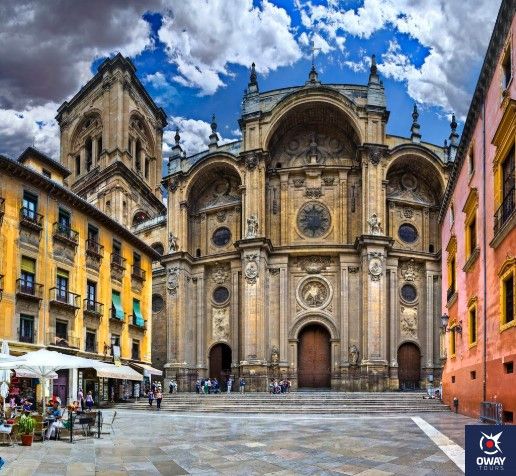 History of the Cathedral of Granada

Once Granada was taken, which was the last territory under Muslim rule, the Catholic Kings undertook a strong constructive policy. This line of action was intended to symbolically show the Catholic victory by slowly transforming the medieval urban fabric into a convent type city. The culmination of this project was the Cathedral, which was built on the base of the old Mosque. The temple that was projected responded to the prevailing Gothic order at that time. However, the death of Isabel I led to the construction of the Royal Chapel to house the tombs of the monarchs before the body of the church was finished.  The construction of the Cathedral lasted more than two centuries and therefore involved the participation of more than one architect, although the most important of all was Diego Siloé. He had studied in Italy and therefore was aware of the architectural trends that existed which led him to propose the Cathedral as a Renaissance building. This was not a quick solution since first it was necessary to convince Emperor Charles V who wanted to maintain the will of his grandparents. Furthermore, as the foundations were already built according to the parameters of the flowery Gothic, the change of style had to be carried out taking into account a series of limitations. In fact, one of the most outstanding aspects of Siloé’s idea is precisely the series of tricks and resources he employed to make the reality as close as possible to what he imagined. It should be said that while the Cathedral was being finished, the constructive policy was also being pursued. The most important spaces for the Muslim community were used to settle the main icons of the power of the administration of the crown such as the Christian palace of the Alhambra, the University and the Royal Chancellery. 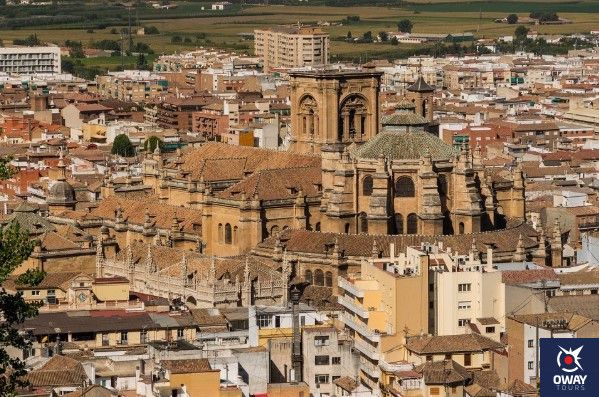 Parts of the Cathedral of Granada

As an architectural complex, the Cathedral becomes a space like a multitude of interesting elements and a great container of works of art. From the walls to the ceilings everything is decorated to demonstrate the power of the Church. In addition it is not convenient to forget the pieces of art furniture like the altarpieces and sculptures. Here we will point out the most particular parts of this sacred building.

Obviously the first thing we see of the Cathedral is its imposing facade. This was made by Alonso Cano from Granada in 1667. As we have already mentioned at first, the building was to be of Gothic style and therefore its exterior structure responds in the first place to this style. The facade was designed as a triumphal arch composed of three streets set back by columns. It is decorated using plant and geometric motifs. All this corresponds more to a baroque mentality, already prevailing in the mid-seventeenth century. Like many other Baroque façades, the Granada one represents a backdrop that with very little is capable of modifying the perception of the whole. Unlike other parts of the temple here we find an abundance of decoration and a strong use of contrasts. In this way, a whole series of mouldings and pilasters are used to highlight the opposition of the chiaroscuro, thus creating a visual spectacle. Even so, Alonso Cano introduces a whole series of characteristic marks of his work such as the use of the circular oculus. 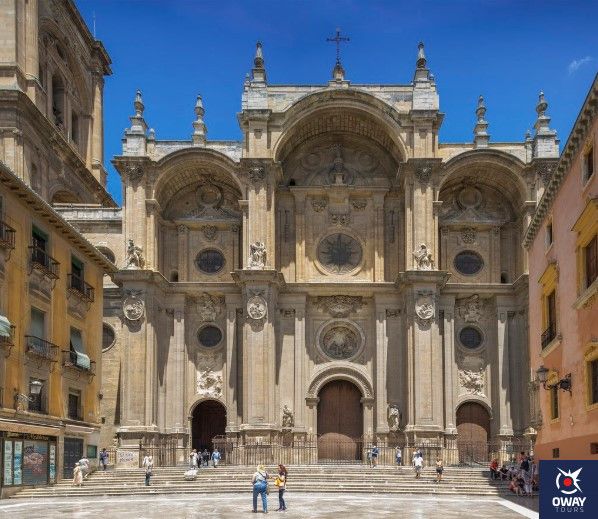 The interior of the cathedral

When Diego Siloé proposes his new idea for the building he has in his mind the references of both the Holy Sepulchre and the Cathedral of Toledo. In this way, as he also had to deal with the layout of the previous architect Egea, what he did was to combine a rectangular floor plan with five naves with a circular floor plan that created a double ambulatory. The remains of its Gothic past can be seen by the use of staggered naves covered with ribbed vaults. However, Siloé includes a whole series of classicist elements, such as the use of Corinthian capitals and fluted half-columns, which respond to that Renaissance image. It also adds some high pilasters with the intention of being able to raise the height of the naves. It is also worth noting the Plateresque stonework of the Choir and the Chapter House. Plateresque is a style that comes to mind for this place as it involves the use of Gothic structures on which Renaissance elements are added. In this space, the treasure of the Cathedral and the pieces of the Sacristy are currently on display. 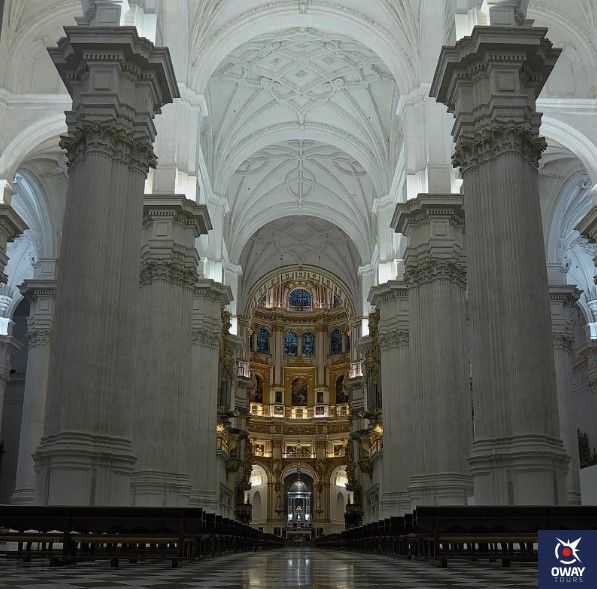 One of the characteristic aspects of this building are the fifteen chapels that close the side naves, as each one of them responds to changes in the taste for art. In addition, both pictorial and sculptural works are preserved in them. Of all the most outstanding are the Main Chapel and the Capilla de Nuestra Señora la Virgen de la Antigua. The Main Chapel (Capilla Mayor ) was thought to be the pantheon of the Austrias but changed its mind when Felipe II decided to build the Monastery of El Escorial. In this way the oratory became home to the paintings of Alonso Cano. It is a space that is practically autonomous from the rest of the construction and that responds to a circular plant. Recently it was discovered that it is painted with a starry sky that was covered by some plaster mouldings. From the Capilla de Nuestra Señora la Virgen de la Antigua what is really striking is the 15th century altarpiece designed by Pedro Duque Cornejo. In it the Virgin and Child are represented. They also have two paintings by Francisco Alonso Argüello with the portraits of the Catholic Kings. 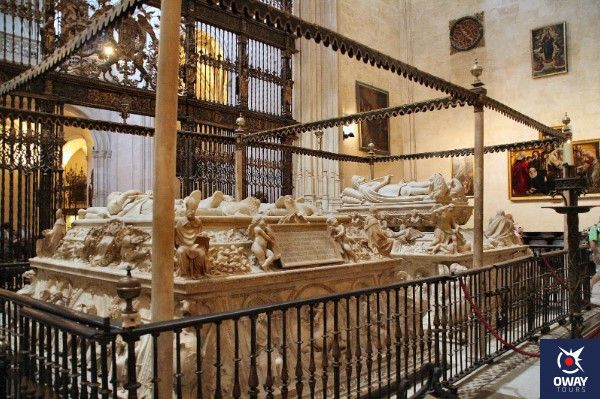 Timetables and prices to visit the Cathedral of Granada

The Cathedral is located in the centre of the historical centre of the city on Gran Vía de Colón Street. It can be visited all year round with the exception of religious worship, both the usual and festive celebrations. Therefore, if you visit it during a holiday, please confirm the visiting hours by calling 958 22 29 59. The opening hours are from Monday to Saturday from 10:00 to 18:30 and on Sundays and holidays from 15:00 to 17:45. The general entrance ticket includes an audio guide and costs 5 euros, 3.5 euros if you are a student or disabled person and free for children under 12 and schools in the province. The guide is available in eleven languages: Spanish, English, French, German, Japanese, Korean, Chinese, Portuguese, Italian, Russian and Dutch. In the vicinity of its location you can also visit the Madraza, the Alcaicería, the Curia and the Archbishop’s Palace or the Plaza Bib-Rambla.

Curiosities about the Cathedral of Granada

The Cathedral of Granada was designed to be one of the most impressive on the continent thanks to its two enormous towers of 81 meters high. The curious thing about Siloe’s original design is that it looks suspiciously like another one made by an Italian at the time he was in that country. It is an elevation and a model made by Antonio de Sangallo the Younger for St. Peter’s Basilica even though it was never carried out due to the Vatican’s refusal. However, as we know, the façade of the Cathedral does not respond to Siloe’s wishes but is the result of the work of Alonso Cano who never finished the towers. Only the foundations of the right side were built, which would be the first three bodies of the total design. The reason for the paralysis of the project was not a supposed plagiarism but the constant collapses that ended with the death of several workers. Thus, Felipe II, fearing the strong seismic activity in the area, stopped the construction. Speaking of landslides, the Cathedral currently has 16 bells of different origin, one of which forced a neighbor to move after falling on top of his house. Two others caused the death of two bell ringers for which they were condemned to not ring for a hundred years. 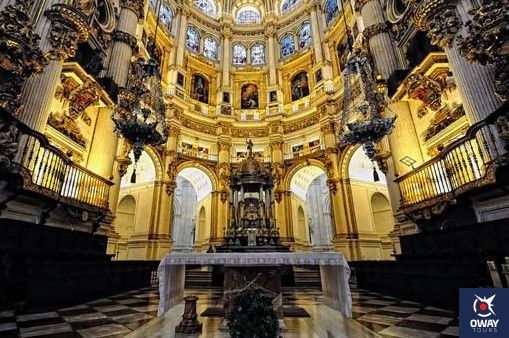