One of the best ways to get to know a city is to understand its historical past. This will mark the structures of the old buildings and the remains that we can observe in our days. Also the social and cultural relations that are established there. Below we explain the evolution of Granada, a municipality marked by a turbulent history full of conquests and wars.

No one knows the exact origin of Granada as the only information that has survived is of a legendary nature. Mythically the city was founded by Garnata, a descendant of Noah, or by a daughter of Hercules. More rigorously, one can only speculate that it was created around the 7th century B.C. by the Iberian tribe of the Túrdulos, under the name of Ivherir or Ilturir and that it would be situated on the hill of San Nicolás. Later, around the fourth and third centuries BC, the population, now called Ilibiris, would be controlled by the Carthaginians who would lose it during the Second Punic War. This war is the most famous of the conflict that took place during the enmity between Rome and Carthage for the control of the western Mediterranean. The military hostility lasted from 218 BC, when Rome declared war in revenge for the attack on Sagunto, until 201 BC, when the Carthaginian commanders Hannibal and Scipio signed the surrender. The municipality, already fully Roman, would be located between the Alcazaba and Albaicin quarters, reaching part of the Alhambra hill.

With the fall of the empire, the populations dependent on it would be invaded by different barbarian peoples. In the case of the peninsular territory this would end up being controlled by the Visigothic monarchs. Again we have a deficient amount of documentation which makes it difficult to talk about this period. What we can say is that the dismantling of the Roman networks would have caused many localities to disappear. Thus the municipalities that survived, like Ilibiris, would have had a demographic increase. By these times the toponym of Granata only made reference to one more district of Ilibiris, whose inhabitants were mainly Jewish.

In the 8th century the Muslims arrived in the Iberian Peninsula and founded the emirate of Cordoba. This independent state will be ruled by the Umayyads. At this time Granada was not a particularly important or attractive territory. In fact, it was granted as a war booty to a Syrian regiment. The detachment arrived late and the best prizes were already distributed. So they had to make do with an area where little or nothing should remain of the old Ilibiris, which was probably destroyed.  Moreover the Syrians would settle in Elvira, of which now only an archaeological site remains. It was not until their abandonment in 1010 that they returned to the area of present-day Granada. The move took place due to the fall of the state founded by Abderraman III. Known as the Caliphate of the West. The Caliphate meant the end of the independent emirate created in 756. Although it was the period of maximum splendour of Al-Andalus, it ended up being divided into different Taifa kingdoms, one of them was the Zirid Kingdom of Granada. It was here that Granada was really established as a fully urban and prosperous settlement. This means that the city is actually the result of an exclusively Muslim design and dates back to the 11th century. The Ziris would remain in power until 1238 when once again the town of Granada would change owners. Until this time the municipality had gained more and more relevance, being the head of the different political administrations. Thus, when Ibn al-Ahmar founded his own dynasty, and consequently the Nazarí kingdom, he took Granada as his capital. In the beginning the power resided in Jaén but that lasted very few years. The new state had a geographical situation that allowed it to develop an intense trade with the Christian kingdoms, the Muslims and the Genoese. The arrival of riches from so many territories allowed its rulers to undertake the cost of building the Alhambra.

Also the strategic location they maintained made it possible for them to be the last kingdom to be conquered by the Christians. The crown of Castile maintained a constant war, winning more and more territories. Finally in 1492 Boabdil, the last Muslim king, was forced to surrender to the Catholic Monarchs. 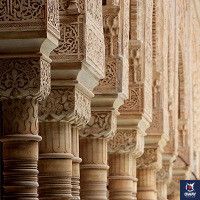 Few changes occurred in the city during the first years under Christian rule. The city was already perfectly structured and the Bishop of Granada had decided to opt for a policy of coexistence with the Muslims. However, this situation did not please the Castilian crown. It had a much more radical opinion about the religion of its subjects. For this reason they changed the previous bishop to Francisco Jiménez de Cisneros who, as the queen’s confessor, had ideas much closer to those of the monarchs. This substitution would change the life of the inhabitants which became much more convulsed and marked by the Inquisition. This new policy generated a whole series of revolts, especially among the Albayzín’s neighbouring population. The most famous was the rebellion of the Alpujarras, in 1568, in which an attempt was made to recover the kingdom of Granada. The only result they obtained was that the Moors were finally expelled for good. The new relations were not only visible in these more direct interactions but also had their symbolic counterpart. During this period the urban structure was modified, converting Granada into a convent type city. For this purpose, those places that had been relevant for the Muslims were replaced with buildings that were representative of Christian power. This not only resulted in the construction of convents, but also in the erection of other spaces such as the Royal Chapel, the Royal Hospital, the Cathedral, the Palace of Charles V and the Chancellery. All this policy had a series of negative effects for the city. The most serious was the drastic demographic loss. This caused certain areas, such as the Albayzín district, to suffer a high degree of abandonment. Also the disappearance of activities such as irrigation or the silk trade. Granada would not recover from this impact until the 18th century, with the arrival of immigrants from the rural world.

By the 19th century Granada was a city that had become paralyzed in time. The urban structure was that of a medieval town which led to problems of mobility and health. This implied the need for a whole series of changes and the opening of new avenues and boulevards. Unfortunately, these works destroyed part of the historical remains. In general, the heritage did not have a good time in this century. A large part of it was damaged by the plundering produced by the French invasion. The disentailment, the economic process in which the properties of the Church were sold, also had negative effects. Although as a counterpart these processes began the modernization of the city. In addition, in those times the first travellers began to arrive, of a romantic nature, interested precisely in the past of the municipality. The most famous was Washington Irving who also favoured the arrival of more people by publishing Tales of the Alhambra (1832). However, Granada would be a city of a rather conservative character, as could be seen during the Spanish Civil War (1936-1939). Although most of Andalusia remained faithful to the Republican side, Granada was favourable to the uprising. This led to some of the darkest moments in its history with the arrests and political executions that took away such well-known figures as the poet Federico García Lorca. In addition, the post-war period ended with the Granada’s sugar industry, producing a drop in the local economy. Fortunately the arrival of democracy produced a growth and flourishing of the city. The large number of monuments that it still preserves together with its proximity to areas such as Sierra Nevada, with a ski resort, and the Tropical’s Costa have made it a perfect place for tourism.