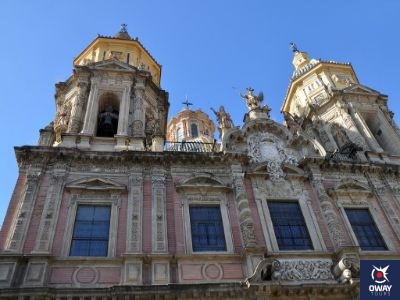 Seville is the city where you can make thousands of plans, so you will not get bored, because it has a special color. You will enjoy its art and its infinity of history and the diverse monuments that compose it, since it has a very defined personality.

In Seville you can make various plans such as a free tour, visit the Real Alcazar, its Cathedral, a relaxed walk through the Triana neighborhood or climb the famous Girarla. You can also enjoy its impressive Plaza de España or stroll along the Guadalquivir until you reach the Torre del Oro. But that’s not all, you can visit a marvel of baroque architecture of the eighteenth century, the Church of San Luis de los Franceses.

This church is an original jewel of the Andalusian Baroque, which is formed by the Church of San Luis, the Domestic Chapel and the Crypt. To visit this church you have to access the street of San Luis, which is located in the famous Macarena neighborhood.

History of the Church of San Luis de los Franceses

The church of San Luis was part of the Novitiate that was built on the traditional site of the Palace of the Medinaceli family. Today, it is decorated with saints and devotions of this order.

This temple was designed by the architect Leonardo de Figueroa. This temple was called San Luis de los Frances and was named after the French King, cousin of San Fernando. This name was given because of the conditions of the family that donated the land.

In 1767 the Jesuits were expelled so that the confiscation of the nineteenth century did that the worship of the Church was preserved. The novitiate building has had several uses over the years, it was a Franciscan convent, asylum for priests, it was also a hospital and, in addition, until the sixties of the twentieth century it was the central hospice. 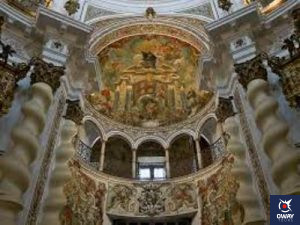 Parts of the Church 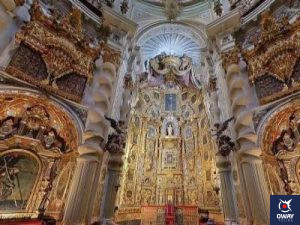 In this facade the Solomonic columns stand out and the facade of the altarpiece is very decorated so it will surprise you.

If we look at the top of the facade or at the top we can see the Spanish coat of arms and this coat of arms is crowned by three archangels who are the defenders of the Church.

At the ends of the facade we can see two octagonal towers that are decorated with tiles and where we can see the Evangelists.

The entrance door is also decorated and here we can see the images of San Hermenegildo and San Fernando. 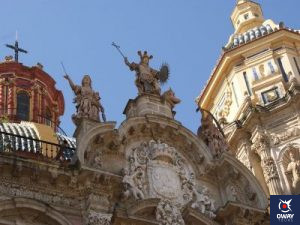 The interior of the church

All the interior of the temple is decorated by several painters, Lucas Valdés and Domingo Martínez and many of the images and altarpieces are works of the sculptor Pedro Duque Cornejo.

Upon entering the temple, above the entrance door we find fresco paintings that represent the allegory of the Spiritual Exercises of St. Ignatius, along with St. Charles Borromeo and St. Francis de Sales. On the sides we find the Three Graces and the Bull of Pope Paulus III.

The church has a Greek cross plan with a dome on top of it, supported by 16 Solomonic columns. On these columns you can see decorated lattice stands.

The central dome is formed by large windows and it has fresco paintings by the painter Lucas Valdés. These paintings symbolize objects from Solomon’s temple and Christian virtues. In addition, you can see next to them the images of the founding saints of religious orders.

This altarpiece is a spectacle of art and is fully decorated in which there are shapes, mirrors, lights and colors, but highlighting a large crown on a canopy in which is chaired by a canvas of St. Louis. Under the canopy we can observe an Immaculate Conception and a painting of the Virgin of Bethlehem with the Child. This painting is of mannerist style and anonymous author. This altarpiece is surrounded by relics and paintings of the Virgin, priestly Christ and Saints.

This chapel is separate from the main church and is located in the former novitiate. This chapel was a private church, and today it is decorated with fresh paintings of images and relics. These paintings are the work of the painters Lucas Valdés and Domingo Martínez.

This chapel has a richly ornamented altarpiece that represents in the center the exaltation of the Eucharist. On it we can observe images of the Virgin Mary or other Saints.

In the lower part of the altarpiece are the recumbent images of St. Francis Xavier and St. Stanislaus of Koska.

The dome has an elliptical form of the presbytery and is formed by a fresco of the Exaltation of the Virgin and surrounded by the apostles. The dome also has a rectangular nave and in which on the walls we can observe reliquaries along with paintings of the life of the Virgin and the Apostles.

This chapel also has a part that is the choir and which has paintings of St. Ignatius. In addition, you can not miss the impressive Sacristy where you can see the back of the altarpiece and two chests of drawers.

The crypt and the courtyards

The crypt is located in the lower part of the main nave. Many bones have been found in this crypt, many of them of women, children and men, also of Jesuit priests, nuns and novices.

If we continue through the crypt we will also see the courtyards that were part of the old novitiate, although these are nowadays transformed.

There are two courtyards, which have been restored. Of these courtyards, the one that stands out the most is the one closest to the entrance door. This courtyard is an orchard where pots have been placed that have been extracted from the vaults of the building and which has been transformed into a semi-wild archaeological garden. 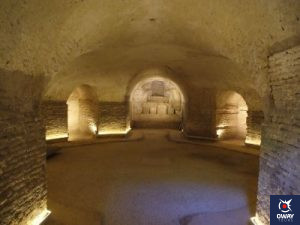 Schedules and Visits to the Church

This church has several schedules to visit it. On Mondays it is closed, but the rest of the week it is open, that is to say from Tuesday to Sunday and these days have a schedule to access the monumental complex from 10h to 14h in the mornings and in the afternoons you can access from 16h to 20h.

In the months of July and August the schedules vary. On Mondays it is still closed, and will be open from Tuesday to Sunday from 10h to 14h and in the afternoon from 18h to 22h.

The entrance fee to visit the complex is 4 €. If you access with accreditation the entrance fee is 2 €. This reduced rate also serves for people who are under 16 years old as long as they are accompanied by a person of legal age. In addition, people over 65 years old, the unemployed, students up to 25 years old and the disabled can also enjoy the reduced rate. Residents of provincial Seville may access the set with accreditation for only 1 €.

If the visit will be made by groups, with a minimum of 10 people and a maximum of 20, the entrance fee will be 2 € per person. But that’s not all, on Sunday afternoons you can access the set for free.

Curiosities of the Church of San Luis de Los Franceses

One of the biggest curiosities about this church, is that for art lovers in this church you can see, observe and enjoy a myriad of styles that form the church, and in every corner you will find something new and surprising.

This church for having a good location and being in the neighborhood of the Macarena is visited by many tourists, as you can enjoy the art and in which their fresh paintings stand out.

Another curiosity is that the church is divided into many parts and in which each of the parts will be surprised.

Another curious fact is the transformations that the novitiate building has undergone and the uses it has had in the past. Are you going to miss this spectacle of art? Come and visit this temple that will remain engraved in your mind. 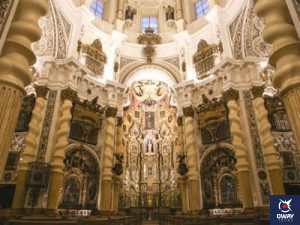