How to get to Cadiz – Spain and enjoy your holidays 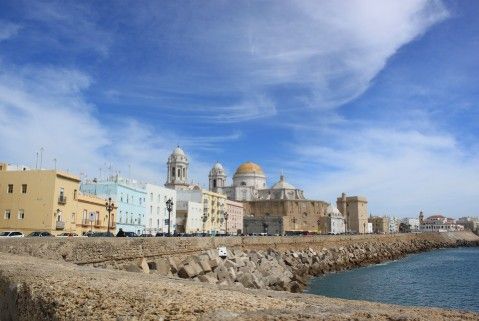 There are so many reasons to love Cadiz. This ancient charming city is located on the southwest coast of Spain, on a spit of land between the mainland and the Atlantic Ocean, not far from the Strait of Gibraltar. Despite being located on the coast, it is difficult to reach by public boat or ferry, as most ferries go to ports on the Mediterranean coast of Spain, and many people have trouble finding out about how to get to Cadiz.

If you are traveling from abroad, plane comes first. There are basically four options: Malaga Airport, Seville Airport, Jerez Airport and Gibraltar Airport.

So let’s analyze, one by one, the different options to get to Cadiz.

It is the nearest major international airport to Cadiz is in Seville, approximately 80 miles to the north. As of early 2011, no direct flights from North America operate to Seville, however, the city is well connected to most major European cities, as well as a few in North Africa.

Once you are landed, you have different possibilities. The first one is renting a car and driving to Cadiz. From Seville, take the AP-4 motorway into Puerto Real, and route N-443 into Cadiz. The trip takes approximately an hour and a half. Cadiz is also reachable via the south, on the A-48 highway to route CA-33, both of which run parallel to the coastline.

Another possibility is taking a train to Cadiz. There are numerous trains that operate between Seville and Cadiz, a trip that takes about 90 minutes.

Finally, you could also take the bus, which is the cheapest option as well. Buses connect Cadiz to the rest of Spain, although they are relatively slow compared to trains and driving yourself. Buses take about two hours to get to Cadiz from Seville. However, they run frequently and can be a convenient way to see smaller towns in Andalucía that do not have train service.

A bit farther, it is the fourth busiest airport in Spain after Madrid-Barajas, Barcelona and Palma de Mallorca, so it boasts excellent connections with the most important cities in the world and nearly everywhere in Europe. It is more than likely that you can find a good deal in the specific dates you are looking for that in the other airports mentioned here.

Renting a car and driving is the best option to reach Cádiz from this Airport. It will take you around two hours and a half. You will have to take the A-7 highway passing by Marbella, Estepona and Manilva. You will get through San Roque from where you will be able to choose from two road routes, one of the roads goes through the Natural Park of Los Alcornocales and another through Algeciras, Tarifa and San Fernando bordering the coastal area until getting to Cadiz, the first one might be longer but with beautiful natural landscapes so you decide which one to take.

Located 9 km northeast of Jerez de la Frontera in Southern Spain, and about 45.2 km from Cádiz, it is, hands down, the most convenient option. The only problem is that, because it is such a small airport, there are way fewer connections.

Once at the Airport, you have different options, all very handy.

You can take the train, which takes 46 minutes to get to Cádiz and costs €6 approx.

The bus is less convenient as you will have to go to Jerez de la Frontera first and, from there, take another one to Cádiz town, so the whole trip will take more than an hour.

Finally, if you rent a car it will only take you around 29 minutes to reach your destination.

Gibraltar Airport is the civilian airport that serves the British Overseas Territory of Gibraltar. The runway is owned by the Ministry of Defense for use by the Royal Air Force as RAF Gibraltar. Civilian operators use the civilian-operated terminal. It is not very big, but it is very well connected to many British Airports.

Once landed, you can choose between taking a bus or renting a car.

The buses are operated by Autos Aguirre and take around 02:30 to reach the destination. It is quite a journey, but a good option if you are in a low-budget.

Renting a car is more expensive but definitely faster and more convenient. as the trip will take you around 1:20 minutes. Tip: better cross the frontier and rent the car in Spain. It will be cheaper and you won’t have the problems of driving a Gib Registered car in Spain.