➤The neighbourhoods of Cadiz, Discover all of them | OwayTours.com 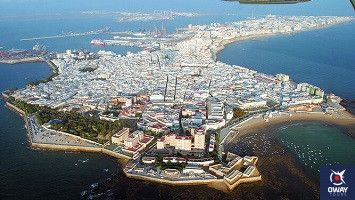 The essence and joy of Cadiz runs through its streets and its neighbourhoods. Although it is a small city with few inhabitants, “the little silver cup”, how it is known, is divided into 6 neighbourhoods. These neighbourhoods are separated into two clearly differentiated areas: the area within the walls (inside the old city walls) and the area outside the walls (outside the walls). Intramuros is the historical part of the city and extramuros is all the new part. The people of Cádiz who live in the intramuros of the city are known as Bedouins. In this article we tell you about the different neighbourhoods in Cádiz, read on!

La Viña is the most popular neighbourhood within the city walls of Cadiz. It is a traditional, simple neighbourhood, the oldest in the historical centre, where Cadiz culture and personality can be appreciated. The people from this neighbourhood have a great sense of humour and love satire, and they have kept the carnival tradition alive throughout history. Moreover, this neighbourhood is one of the epicentres of flamenco, where you can listen to spontaneous peñas (flamenco ensembles)  in the bars of the area.

However, the best kept treasure of the Barrio de La Viña is the Caleta Beach, framed by the castles of San Sebastián and Santa Catalina. On this beach, locals, Cadiz residents from all over the city and tourists meet to sunbathe, lie on the sand, swim and enjoy the summer.

The Mentidero district occupies a large part of the northern part of the historic centre of Cadiz. This neighbourhood was born in the mid-18th century, when the economic and demographic expansion of the city forced the occupation of land that, until then, had housed small family gardens. It was during this period when the Plaza del Mentidero, where the neighbourhood has taken its name from, was developed. The name comes from the gossips and hoaxes that were spread in this square, a meeting place for neighbours. Today it is still a meeting place, especially because of the little terraces around the fountain. It is also a very important neighborhood in carnivals, as it houses the Gran Teatro Falla and the “carrousel de coros” during the festivities.

This neighbourhood is also a natural treasure for the city, as it is home to the Parque Genovés, the largest green space in the historic centre of Cadiz, and the Alameda Apodaca garden, designed in the 1920s in a characteristic Andalusian regionalist style, with colourful ceramics and tiles. At one of its ends is the Baluarte de la Candelaria, one of the fortifications that protected the access to the port of Cadiz.

The Barrio de Santa María stands out for housing the entrance to Cádiz within the walls, the so-called Puertas de Tierra, designed in the 18th century. However, in addition to the presence of the wall, the neighborhood stands out for collecting a very peculiar art: the puppetry tradition. The Genoese merchants who inhabited the city during the 18th century brought puppet shows to Cadiz, whose history can be seen in the Puppet Museum located in this neighbourhood.

Flamenco is another identifying element of this neighbourhood, as it has been the birthplace of many artists, including Enrique El Mellizo, La Perla de Cádiz and Chano Lobato. In addition, on summer nights the streets and flamenco clubs come alive to celebrate performances accompanied by good Jerez de la Frontera wine. 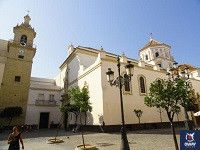 This is the oldest part of the city and is surrounded by the Arab wall. It has been inhabited for about three thousand years and many historians claim that it is the oldest neighbourhood in Europe and therefore in the West. It stands out for housing historical buildings of great importance for the city, such as the Roman Theatre or the Cathedral. Furthermore, it is one of the favourite neighbourhoods of Cadiz residents and tourists, thanks to the number of bars located here, so it is the perfect neighbourhood to try the tapas of Cadiz, have a coffee or enjoy a few drinks with friends. It also has a very fun and modern nightlife.

The Barrio de San Juan is perhaps the most picturesque neighbourhood in Cadiz, with its narrow streets and romantic alleys. The Plaza de las Flores is its main enclave, where you can find nothing more or less than a flower market and a restaurant area. In addition, this neighbourhood is noted for its commercial activity, as it is home to the food market, where fish and other fresh products are sold. There is also a shopping area in this neighborhood, in the Plaza de San Juan, Calle Ancha and Calle Columela, the best central streets for shopping.

El Balón (“The Ball”), also called simply Balón, is a neighbourhood in the historic centre where the Santa Catalina Castle and the Baluarte de Bonete stand out. The Castle of Santa Catalina is a fortification that goes into the sea and was built in the sixteenth century to defend the city.

The neighbourhood took its name from the game that used to be played in the Plaza del Huerto de la Tinaja (now known as Plaza del Balón), which consisted of throwing balls from a distance with a kind of racket or basket. In addition, the neighborhood is known for its commercial and industrial activity in the 19th century. During this period, an electricity factory was built here, making Cadiz be the first Spanish capital to be illuminated by electricity.