4 Plans to do a rainy day in Granada 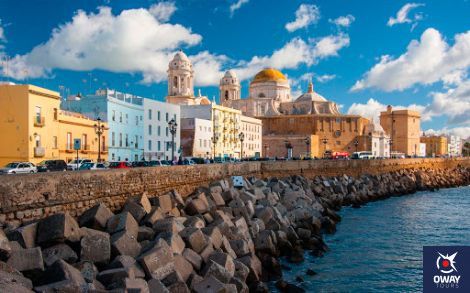 Cadiz has earned the nickname of “City of Light“, a light that not only shines in summer, but also in autumn offers a range of colours that makes it one of the best times to visit the oldest city in Europe. You won’t want to miss the silvery reflection that the Atlantic Ocean reflects on the facades of the buildings and that gives the name of Tacita de Plata (Silver Cup) to this incredible city. This is just a starter of all that this unique place has to offer in autumn, read on to discover the rest.

Many people compare Cadiz with Havana, calling it the European Cuba, so much so that James Bond in his film “Die Another Day” supplants the capital of the tropical country with Cadiz. La Caleta, the most important beach in the capital of Cadiz, reminds us of a Cuban boardwalk and is one of the most photographed places in the city. A walk along the fine white sand of this beautiful beach with the sun hiding in the horizon and with the old La Palma spa as a witness, is presented as the perfect plan to disconnect from everything and connect with oneself, the sound of the waves breaking on the sand will make you fall in love with this place definitively. 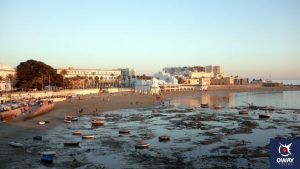 Also located next to the sea, we find an authentic orchard from the end of the 18th century that has been subject to some expansion and remodelling. In it we can not only see an open-air botanical garden, but at the end of the 19th century it was remodelled to include what is now called the “army forest”, a network of fountains, waterfalls, a concert hall and a cafeteria that will make the hours fly by walking among the more than 100 species of trees and bushes that you will not find in any other park in the city. 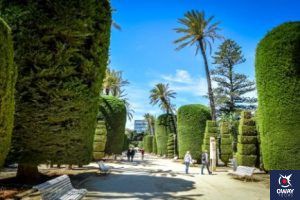 Going up the Tavira tower

If the views at ground level are already spectacular, can you imagine being able to see the panoramic view of the historic centre of the city of Manuel de Falla from above? This is not only possible, but you will do it in an 18th century tower, the official watchtower of the port of Cadiz. This is not the only one you will find in the city, there are a total of 129, although it is the tallest one.

From the top we can contemplate the contrast between the blue of the sea and the white of the lime bathed houses that make up the historical centre of Cadiz and the imposing cathedral in the background. Moreover, this tower keeps a little secret, the Camera Obscura, which projects a living and moving image of what is happening at that very moment outside. Do you need any more reason to visit such a magical place? 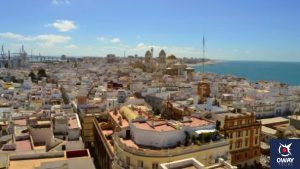 Autumn is the perfect time to get lost in the streets of this traditional neighbourhood. It is not the oldest quarter in the city (El Pópulo is in this position) but it does reflect the way of life of the people of Cádiz. It’s name came after the large number of vineyards that were cultivated in this area before it was built in the 18th century and, due to its remoteness from the port, it did not attract the attention of shippers so it was the lower classes that were dropped here.

La Viña not only offers historical monuments such as the Old Provincial Hospice, the churches of La Palma and Santa Catalina, it is its streets in the Cadiz style, its people, its bars and restaurants that make it one of the most attractive places for visitors. I propose a plan: a typical dish of fried fish, flamenco in the background, La Viña as a witness, can you leave Cadiz with a better taste in your mouth? 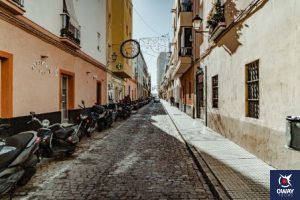 Getting lost in the streets of El Pópulo

This is the oldest quarter of the city (13th century), its streets hold the most hidden secrets and legends. If you approach the Arco del Pópulo (Populo’s Arc), there is an altarpiece of a virgin above it that says: “Ora pro pópulo” (pray for the people). The English troops tried to destroy the image in the 16th century but no bullet hit the Virgin, which is why she was considered to be the protector of the pópulo and that is where the name of the neighbourhood came from.

Walking through the city we also find Callejón del duende (alley of the leprechaun). Its name comes from a pirate whose nickname was “el duende” (the leprechaun) and he smuggled in this alley. But to understand the legend that really stars this place we must go back to the 19th century (War of Independence) where a captain of the French army felt in love with a girl from Cádiz.

They kept their meetings in this alley because she was engaged to another young man. One night, they were caught by the neighbours who, without giving credence, did not hesitate to condemn them to death. Legend has it that two centuries later, you can still see the shadows of both of them when the night comes. Moreover, on All Souls’ Day, many people decorate the alley with candles in memory of this couple in love. Is not November the best time to discover this place?

Tacita de plata, City of Light, European Cuba… We have known all these names to refer to Cadiz. Now it’s time for you to give it a name. 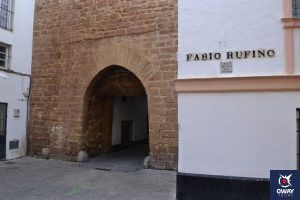