How to get from the airport to the center of Malaga 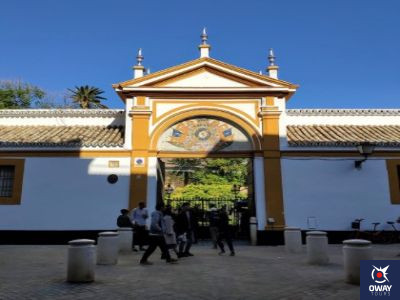 You can’t go away from Seville without visiting Casa de las Dueñas. You will be impressed with its historical importance due to the families that have inhabited it, between them the known Duquesa de Alba. Moreover, it has a lot of artistic and arquitectonic value with authors like Sorolla or Romero de Torres. In addition, with this visit, you will be able to know in a better way Seville.

Palace House of the Dueñas History

Palace House of the Dueñas is located in the historic area of Seville and it is a whole of buildings, gardens and courtyards that were built between centuries XV and XVI. Alsom it is ubicated in the old monastery of Santa María de las Dueñas.

When this monastery disappeared, the palace was founded by Pineda family, they also were a noble family and due to the Juan Pineda rescue, his wife had to sell it, since easy money was necessary. At present and since that event, it is private property of Casa de Alba since 1612, because of the marriage Antonia Enríquez de Ribera y Fernando Álvarez de Toledo.

Later, specifically in 1875, Antonio Machado was born in this same palace, since his father was the administrator of the Casa de Alba.

During the visit inside the palace, you will be able to enjoy the Mudejar arches dating from the 15th century, Gitana livingroom, which receives its name due to the bronze sculpture that is found in that room, workart of the artist Mariano Benlliure, The Tablao room where the Duchess practiced flamenco and the chapel, rectangular in shape and with Gothic decorations, several Gothic windows and typical Sevillian tile sockets on the walls and on the altar. 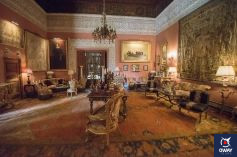 We cannot forget the many courtyards that we can find in this place, in which its diverse vegetation stands out. Among these, it is necessary to mention the Main Courtyard, in which the Sevillian Moorish art is captured, with Round arches and Renaissance elements.

The Lemon Trees Courtyard, described by Antonio Machado in his famous verses from the poem “Portrait” as a large courtyard with numerous centenary cypress and lemon trees. And finally the Oil Courtyard, which leads to one of the areas where the duchess’s private rooms were located.

Now that you know the historical wealth of the Palace House of the Dueñas, there is nothing like visiting it in person and discovering much more for yourself, here you can find the hours, prices and some information related to these of interest. 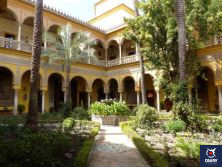 The schedule in which you can visit the Palace House of the Dueñas is currently from 10:00 to 15:00.

You must take into account for your visit that the last entry and end of the sale of these will be at 14:15. In addition, the Palace must be vacated 10 minutes before its closing.

For children between 6 and 12 years old, for unemployed students under 25 years old, disabled and over 65 years old. The price is € 8, as long as the supporting documentation is shown.

Finally, the entry will be free for children under 6 years old. They will also be for the Official Guides from Monday to Friday, not holiday, from 2:00 p.m. to 2:15 p.m. until the number of 50 entries is completed and the tickets are distributed from 2:00 p.m. the same day, without the possibility of making a prior reservation.

How To Get Palace House of the Dueñas

It will not be difficult to find the place since it is located in the historic center of Seville, specifically in CALLE DUEÑAS, 5.

Some Curiosities About Palace House of the Dueñas

If you have not yet been convinced of the great experience that comes with visiting the Palace House of the Dueñas, here are some curiosities that will convince you completely.

Did you know that one of the reasons why the Casa de las Dueñas opened to the public in 2016 was due to its expensive maintenance?

Yes, due to its age and the wealth it contains, this is a way to cover costs.

From the huge main courtyard, the staff of the Duchess of Alba collected the oranges with which they prepared the juice of Doña Cayetana and her children.The stables of the Palace, now in disuse, are the oldest in Seville, there you can find Eugenia de Montijo’s saddle and in the basement of these, there are some unexcavated Arab baths.

In the Palace, great events have been celebrated and it has been visited by great personalities such as Eduardo VIII, Alfonso XIII, Jacqueline Kennedy or Grace Kell.

Everything continues as the Duchess left it after her recent death. During the visit we can contemplate different photographs of her children, of the Duchess herself riding a horse. In addition, there are also posters dating from the 19th century, about important festivals and events in Seville and Jerez.

Here you can find our guided tours of Seville. You cannot miss them!