▷All the information about Real Fábrica de Tabacos 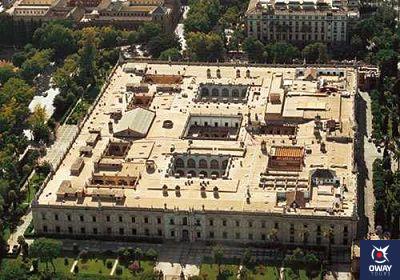 This building has been classified as an asset of cultural interest since 1959. It will allow you to know and understand the history of Spain. So, besides visiting the beautiful city, you can’t miss the opportunity to visit this famous factory, which will leave you breathless.

History of the Royal Tobacco Factory

In the eighteenth century began to build the Royal Tobacco Factory of Seville. This factory is a stone building, outside the city walls. The building has large dimensions and also several styles, Renaissance-medieval and Baroque.

This building was the headquarters of the first tobacco factory in Europe and is also the most important industrial building in Spain.

This building is composed of several parts, it has a large rectangular plan with two floors, a mezzanine and a roof terrace. In this building, tobacco powder was once manufactured, which was the usual consumption of the time, and then it was manufactured in the form of cigars.

This building had up to 12,000 workers, most of whom were cigarette makers. Many of them appear in Bizet’s opera Carmen, which was developed in Seville and in which the love story of an employee of this factory takes place. 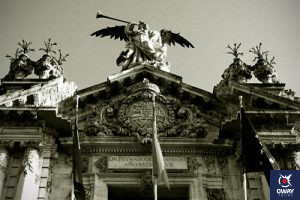 Parts of the Royal Tobacco Factory

The Royal Tobacco Factory building is made up of several parts. It also has a large rectangular plan with two floors, a mezzanine and a roof.

The building consists of an exterior building, the moat and the interior which is divided into the building of the Rectorate of the University of Seville current, the central courts, the gipsoteca and the library.

This industrial building is one of the oldest buildings of this type preserved in Europe. The exterior building is formed by a rectangular base, measuring 185 x 147 meters. The façade of this building is located in front of the Prado de San Sebastián. In front of the façade is a statue of the Cid, which is the work of Cayetano de Acosta.

On one of the sides of the facade, specifically the one that faces Avenida de San Fernando, there is a Baroque facade formed by columns and a balcony. This side of the building is surmounted by a tympanum decorated with royal attributes in the lower part of the body and this one decorated with historical motifs that have passed in different eras. The highlight of the facade is a statue of the glory and vases of lilies.

After the reforms carried out in 1956, new doors were opened, one to the south and the other to the west, which gives access to the faculties of philosophy and letters, and also allows to enter the office area with a large double staircase that ends in the current auditorium of the university.

The eighteenth-century chapel houses the Cristo de la Buena Muerte (Christ of the Good Death), which belongs to the Hermandad de los Estudiantes (brotherhood of students) and is in procession on Holy Tuesday.

You can also find the old prison dungeon, where people who committed small crimes were taken. 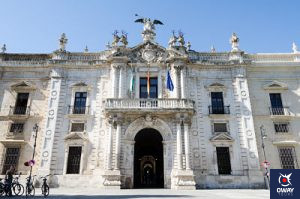 The building is surrounded on three sides by the moat. The moat is delimited by several sentry boxes, except in the area bordering San Fernando street.

The moat was built for security reasons, as the building was located on the outskirts of the city.

The building was once surrounded by a wall, to which a gate was added in 1861. The gate helps to highlight one of the most impressive buildings in the city. The gate was built by the Portilla and White Brothers Foundry, whose signature can be seen on the entrance gate.

Interior of the building

The building of the Rectorate of the University of Seville consists of 14 courtyards, rooms and large galleries. This building after the entrance you can see a vestibule by the door of San Fernando street.

The central courtyards are formed by 3 main courtyards. The Patio del Reloj is an old stable that is formed by a belfry with a clock and has two bodies with beautiful arcades. In this courtyard you can see the sculpture of Maese Rodrigo de Santaella, who was the founder of the University of Seville. This courtyard is currently reserved for cultural and social use.

The courtyard of the Fountain is the place where tobacco was once thought and loaded. This courtyard is the convergence point of the four main doors of the building and also has a fountain designed by Cayetano da Costa.

In these courtyards you can visit several galleries and wide corridors formed by vaults. It is also worth mentioning that they are well lit by the windows it has.

The auditorium was a meeting room where academic events were held in the past. It is currently decorated with paintings from the 16th and 17th centuries.

In the Rectors’ Gallery you will find portraits of the university’s rectors from the 19th and 20th centuries. You can also appreciate different furniture from the 18th century.

The gipsoteca is a space where you can see plaster casts that reproduce Mesopotamian and Egyptian coins.

It is worth mentioning that inside the building there was also a library. The library was founded in 1505 and consists of 917 manuscript volumes and books from different centuries. 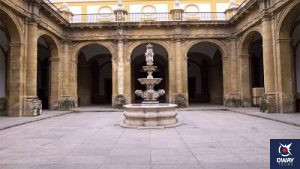 The Real Fábrica de Tabacos de Sevilla is located in Calle San Fernando, very close to the Cathedral of Seville. So if you are in the cathedral, you can walk to the historic factory, which is only 10 minutes away. From the cathedral you can also use public transportation. To do this, take the “T1” line to the San Bernardo stop and get off at the Puerta de Jerez stop. Once you arrive at the Puerta de Jerez, you only have to walk for two minutes to the factory.

If you want to visit the factory and you are at the famous Santa Justa train station in Seville, you can get there by public transportation, private transportation or on foot. If you decide to walk to the factory from the station, you will have to walk for 26 minutes. But if you decide to do it by public transport, it will take you only 17 minutes. To do this, you will have to take the “Line 21” at the José Laguillo stop and get off at the Menéndez Pelayo stop. After getting off at the previous stop, you will have to walk for 4 minutes to the Real Fábrica de Tabacos de Sevilla.

One of the curiosities to highlight is that it is the first tobacco factory in Europe. This building was built in the 18th century. The fact that this factory was built in Seville is not a coincidence because the city had a monopoly on trade with America. There was an attempt to create several tobacco factories in the city, but as they were scattered around the city, it was not a good plan. So they decided to combine them into one factory.

Another curiosity is that it is a great work of military engineers. This building, one of the best preserved in Spain, was built on the land of “Las Calaveras”. The construction began in 1728 and its managers were Spanish or Dutch military engineers.

It is also worth mentioning the legend of the Angel of Fama. This sculpture was on the facade of the Rectorate and it is said that when the cigarette smokers entered the factory, the angel sometimes played the trumpet.

This factory was also a dungeon of the Rectory, because, having a large number of workers, it was common for one of the cigarette makers to be imprisoned for smuggling tobacco. Nowadays, the jail is preserved and remains intact.

Finally, it is worth mentioning that it was a secret base. This base was built because the area was prone to flooding. In addition, it has a peculiarity, namely that it is supported by a system of inverted arches very unusual at the time.

At OWAY TOURS we offer the best guided tours and the best tours. Follow the links for more information: