13 Things to do in Marbella

The 12 must-see places in Cadiz 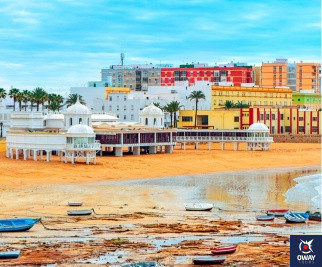 “Cadiz, sweet Cadiz! It is the first place of creation. The beauty of its streets and mansions is only surpassed by the beauty of its inhabitants”. This is how the English poet, Lord Byron, described his time in Spain in a letter addressed to his mother in 1809. Nowadays we can still enjoy every corner of this Andalusian city with more than 3,000 years of history.

It is recommended to travel for at least several days and between the months of May, June, September and October, to enjoy an optimal experience immersing yourself in the culture of Cadiz through its architecture, its gastronomy, its local population, its environment and even its most famous events, such as the Carnival of Cadiz.

There are many landmarks that deserve visitors’ time, but if you had to name the must-see places in the capital, what would they be?

The city is renowned for its great beaches where you can go if you want to spend a quiet day or even if you are looking to surf in the ocean. Together they cover a total of 7.2 kilometres and are: La Victoria, La Cortadura, Santa María del Mar and La Caleta.

With an extension of 450 metres, La Caleta is the central beach of the city. It is located in the old town, making it a popular meeting place for locals and tourists alike. Many people come to the area to enjoy the views of the sunsets and the boats sailing the Atlantic. It is bordered by an old spa, and at either end of it lie the castles of Santa Catalina and San Sebastián, both of which can be visited free of charge. 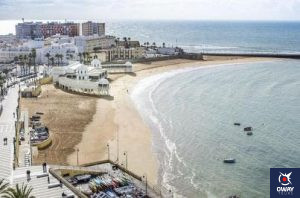 The first of these, the castle of Santa Catalina, dates from the 17th century and defended the city from the rocks against possible pirate attacks, as well as acting as a military prison. It was declared a BIC in 1985. This pentagonal architecture serves as a shelter for the cultural past of the area and as a space for events. It is open from 11:00 in the morning until 19:30 in the evening, closing time during the summer months until 20:00 in the evening. 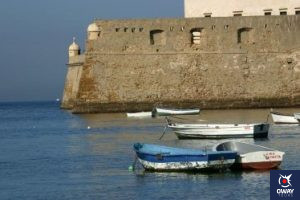 The second, castle of San Sebastián, rests on a short island and, like the first, served as protection for the capital. In recent times it has been the location for several famous scenes from the films “Alatriste” with the actor Viggo Mortensen and “Die Another Day”, the twentieth feature film of the famous character “James Bond” played by Pierce Brosman. Visiting hours begin at 09:30 in the morning and end at 17:30 in the afternoon, also extending its closure to the public in summer until 20:00 in the evening. 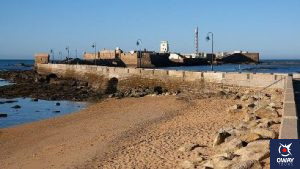 It is a building of monumental proportions and of baroque and neoclassical style that can be seen from any part of the capital due to its large size. Its main door rises between two towers from which you can admire the views of the city 74 metres above the ground for an entrance fee of 4 euros. It is the only Christian cathedral with a yellow dome, something normally associated with Muslim culture. Inside it has different elements such as Corinthian columns; 16 chapels, including the chapel of San Sebastián; a high altar, a space for the choir; a crypt, where the Spanish composer Manuel de Falla or the poet José María Pemán rest; or the Clock Tower, a viewpoint of this heritage site.

The entrance fee is 5 euros and includes admission to the Cathedral Museum.

Immerse yourself in 100 years of history through our guided tour of the Cathedral. 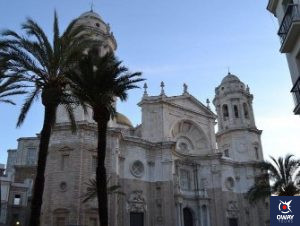 Submerged between fountains and palm trees is the Main Square of the capital. Formerly, during the 16th century, it was a place of international trade due to its proximity to the port of Cádiz, where imported goods from the American continent could be found via the Carrera de Indias, the main shipping route between Spain and the colonies. This function was transferred to the city’s Central Market after its construction.

Completely pedestrianised in 2012, you can visit the Baroque church of San Juan de Dios, the Casa de los Pazos de Miranda, the monument that honours the politician Segismundo Moret and the Town Hall itself, a construction begun by Torcuato Benjumeda in 1799, of neoclassical origin and finished by García Álamo, who continued along the lines of Elizabethan architecture. It is a place of rest and relaxation where the characteristic gastronomy of the area is presented to visitors. 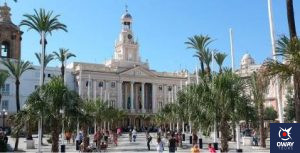 It is located between the Town Hall and the Cathedral, at the beginning of the historic quarter of the city. It was founded in the 13th century and is considered the oldest in Europe. Its medieval origins are limited by the different arches of the wall, the arches of La Rosa, Los Blancos and El Pópulo. Within this area you can find outstanding landmarks to visit such as the Square of San Martín, where you can find the Baroque Admiral’s House, the old palace of the area; church of Santa Cruz, also known as the Old Cathedral, dating from the 17th century; Roman Theatre, an archaeological heritage; Café Teatro Pay Pay, a meeting place for artists from the capital; or Posada del Mesón.

This neighbourhood is an example of a place where both locals and visitors can enjoy the purest Cadiz culture and gastronomy.

Delve into the heart of the neighbourhood with our guided tours in Cadiz. 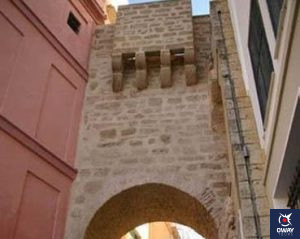 Tavira Tower and the Darkroom

At the top of the 18th century baroque style Tavira Tower, one of the 129 towers in the city and 45 metres and 173 steps above the ground, you will find the most outstanding viewpoint in the area. Being the highest tower in the old part of the capital and the only one open to the public, its main function was as a lookout post for the ships that docked in the port of Cádiz, which transported exotic American products. It rests in the Casa-Palacio de los Marqueses de Recaño, which today houses the city’s Conservatory of Music.

Inside is the Darkroom, a space equipped with an optical system of mirrors and lenses accompanied by a voice-guided tour that shows visitors images of the environment surrounding the tower in real time every 15 minutes. It also has two exhibition areas, one explaining the camera obscura and the other explaining the “golden century”.  The opening hours are from 10:00 in the morning until 18:00 in the evening, during the months of October to April, and from May to September it closes at 20:00. 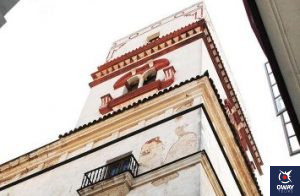 The Teatro Falla is the heart of the Carnival event in Cadiz.  It was formerly known as the “Gran Teatro de Cádiz”, until it was renamed “Teatro Falla” in honour of the composer Manuel de Falla in 1926. This neo-Mudéjar building lies next to the Casa de las Viudas and the Faculty of Medicine in the Plaza Fragela. The first theatrical performances inside the city’s premises date back to the 17th century. This great theatre began its history in 1885 by the hand of Adolfo Morales, finishing the work in 1910. It is the venue for the area’s flagship activity, the Official Competition of Carnival Groups of the Carnival of Cádiz, as well as hosting other stage events that take place in the city.

Visits to the interior of the building are by reservation and the rates are divided according to the programme being followed at. 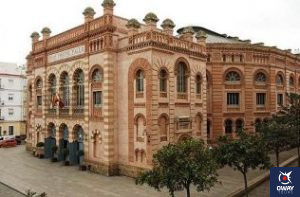 Located in the new area of the capital, its extension covers 5 kilometres and runs along the main beaches mentioned above. Compared to the “Havana’s Malecón”, this is the favourite place for visitors to be the centre of their photographs. Here you will find some of the best restaurants in Cádiz, where you can enjoy first-hand the traditional gastronomy of the area. If you want to enjoy a drink at the beginning of the night, this is the ideal place to do so. As well as being able to do the tour on foot, the promenade has a cycle lane along which you can enjoy the experience in a different way.

Next to this neighbourhood, you will also find the Ramón de Carranza football stadium, which can hold up to 25,000 people, or the church of San José, the first to be built outside the medieval city walls. 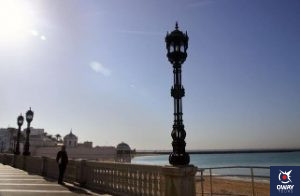 Of neoclassical origin, here you can find the main products that reflect the variety and quality of Cádiz gastronomy, especially fish and seafood. In this place, as well as being able to buy these products, “the Gastronomic Corner” was created, where you can taste typical local dishes such as “churros de La Guapa”. The opening hours are from 09:00 in the morning to 16:00 in the afternoon from Monday to Saturday. 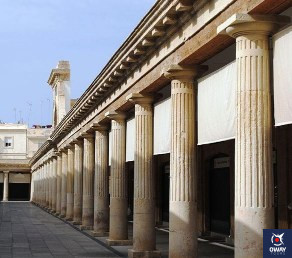 A short distance from the market is the Flowers’ Square, also known as “de Topete”. You can find a series of flower selling points that flood the place with their essence. You can also enjoy the local gastronomy in the famous “Freiduría las Flores”. On the occasion of the Cadiz Carnival, the activity in this area increases due to the events that take place in the Liberty Square, located right next to it.

Discover this and every corner of the city in the hands of professionals during our Free Tours of the city. 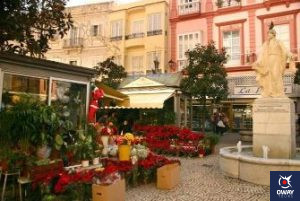 Originated in the 18th century, this park stands out for its beauty from other parks of the same kind in Spain. It lies next to the beach and the old town, bounded by the walls of the old part of Cadiz. The gardener Eduardo Genovés y Puig transformed this park into a botanical heritage where you can find more than 100 different species. Inside the park there is a pond, popularly known as “La Gruta”, with a waterfall, where recreations of dinosaurs stand as decoration, where birds come to enjoy a bath and food provided by visitors to the site.

At the back of this park there is an area known as “la Alameda Apodaca y del Marqués de Comillas” where you can walk along the sea and visit the church of Carmen or even enjoy the views of Rota and Puerto de Santa María. 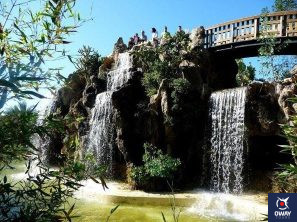