The best viewpoints in Cádiz

The Best Viewpoints of Seville 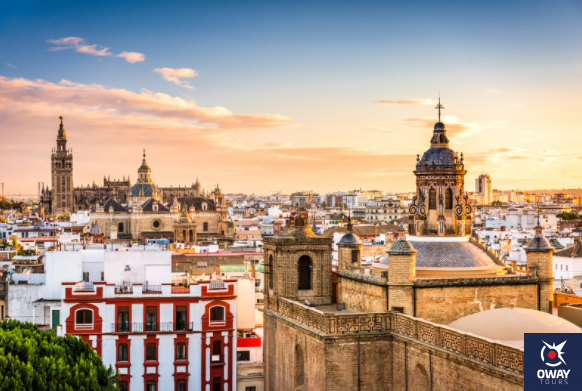 It is well known that Seville has a special colour, which blends in with its main monuments from the heights. From almost all the city’s viewpoints you can see the skyline of the Andalusian capital, whose main protagonist is the Giralda.
In this article we will tell you about the best viewpoints in Seville, where you can enjoy the views of the city.

On the banks of the Guadalquivir River, this ancient defensive tower from the 11th century has become the perfect place to get great views of Seville and the Triana neighbourhood. It has a height of 36 metres.
In addition, in the Torre del Oro we can also enjoy the naval museum that occupies the two lower floors of the viewpoint. General admission is 3€, and on Mondays the reduced price is 1.50€, which is aimed at students, small children, large groups and the over 65s. 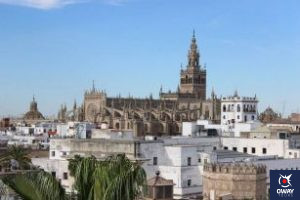 In the central Plaza de la Encarnación is the “Setas de Sevilla” (Seville Mushrooms).
This wooden structure with two concrete columns, where the lifts that lead to the viewpoint are located. It is approximately 26 metres high, and has telescopes and maps to identify the different areas of the city of Seville. The design of this construction was inspired by the vaults of Seville Cathedral, and at the time, it was very controversial, as it was thought to be too modern for the place. As for the price, for those born or living in Seville, access to the viewpoint is free, but for everyone else it costs 3€. 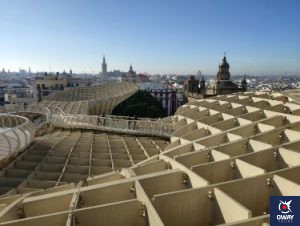 This is undoubtedly the monument most worth seeing, although it is also true that for centuries it was the tallest tower in Spain at 104.1 metres high, and one of the tallest and best known buildings in Europe. It can therefore be considered Seville’s first lookout point. From the city’s watchtower you can see the four cardinal points of the city. The negative point is that from here we cannot see the Giralda.
Admission for Sevillians is free, and general admission is €9. 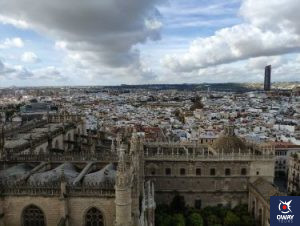 This building, located in the Macarena district of Seville, was built at the end of the 19th century next to the Fábrica de Perdigones, which was dedicated to the smelting of lead. It has a height of 45 metres, and from this tower, we can appreciate the panoramic views of the city of Seville in a unique way. This is due to the fact that in 2007 the city council converted this tower into a camera obscura. The camera obscura is an optical instrument which projects a specific image onto a screen in real time, creating the illusion of looking at the city through a telescope.

Admission to the Torre de los Perdigones costs €4 for adults and €2.50 for children. However, if you just want to access the viewpoint, without the camera obscura, the entrance fee is only €1.50.

This Ferris wheel was one of the last attractions in the city of Seville. More than just an attraction, it is one of the most different viewpoints. It is located in the Muelle de las Delicias, next to the Aquarium of Seville, has 30 cabins and a height of 40 metres. Without a doubt, this viewpoint is not for people with a fear of heights, not because of the height, but because of the sensation of falling into the void that this viewpoint can provoke.
Inside the cabins there is background music and comfortable seats.
Admission is from €7.50 for adults, and €1 for children.

Also known as the Schindler Tower, it is 65 metres high and has now been relegated to second place in terms of views by the Seville Tower. Previously, it offered one of the best views of Seville from the top of its tower. It belongs to the Navigation Pavilion. General admission is approximately 5€. 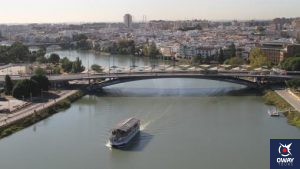 The roofs of the Cathedral

For several years now, access to the roofs of the cathedral has been available by prior reservation, with a group and a specialised guide.
This is not only a less visible and more unknown part of a monument such as the Cathedral of Seville, but also a privileged view.
The cost of the ticket is 12€ per person, including the guide and accident insurance. 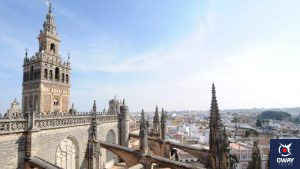 The best views of Seville are offered by the Torre Sevilla or Torre Pelli, named after its architect. On its top floors there is a hotel, reserving for the top floor a restaurant with a viewpoint to enjoy breathtaking views of both the city and the Aljarafe of Seville. It is twice as high as the Giralda, offering panoramic views of Seville from the sky.

The city of Seville has many hotels in the center, whose terraces can be visited whether or not you are a guest of the hotel.

Some of the hotels with views are:

One of the most recently opened hotels, located in the Paseo de Cristóbal Colón, we can get an incredible view of the Guadalquivir River, the Triana Bridge and Betis Street, while tasting one of their breakfasts. 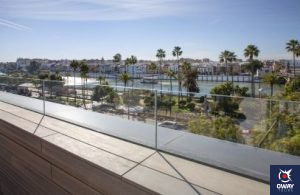 On its terrace we can find a small corner known as Pura Vida, a bar where you can enjoy live music, views of the Giralda accompanied by a drink. 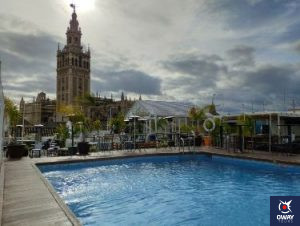 If you are looking to see the Giralda as close as possible, this is your place. Located in the Santa Cruz neighborhood, it is the hotel with excellence views. It has two floors on the terrace to enjoy the views while having a drink. In addition, the terrace has piped music and a separate entrance to the hotel. 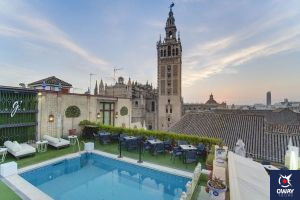 At Oway Tours we have the best guided tours of Seville