The Best Hiking Routes in Granada

The most romantic plans to do in Cadiz

The Best Hiking Routes in Seville

The Sierra de Sevilla is the natural treasure of the province and has a lot of great and beautiful routes that perhaps you didn’t even know existed. Hiking is a wonderful way to get in touch with nature, play sports and spend a different day with your friends or family. Keep on reading to find out which are the best hiking routes in Seville.

On this route, industrial archaeology, botanical, faunistic and geological uniqueness are combined with the beauty of the landscape and today it has been declared a natural monument. For thousands of years, rain and mining have sculpted the Cerro del Hierro, a jewel of the Sierra Norte of Seville. It is a karstic area of limestone rich in iron minerals, which was exploited as a mine even before the arrival of the Roman Empire in Hispania around 218 BC until the mid-twentieth century. It is an area with a lot of relief, with galleries through which you can wander and with fauna such as the shelter, the black stork or rockers. The Cerro del Hierro Route starts near the Casas de los Ingleses (English men houses), the former residence of the mine engineers, in San Nicolás del Puerto. It has a distance of 2.7 km, lasts about an hour and has a low difficulty, so there is no excuse to do it and enjoy this natural landscape and mining. 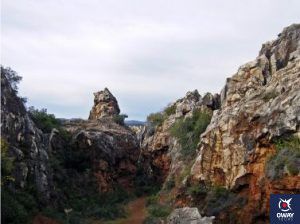 This route consists of the circular route of the Robledal, which surrounds the old mines of the Cerro del Hierro; followed by another path that goes into the mines and tunnels to end with the views of the Huéznar waterfalls. It may seem that it takes a lot of time or effort to do this route, but it is easy and you will only need 3h 20 minutes. You start in the old mining town, following the stretch laid out by the train, which today is a greenway.

After visiting the Cerro del Hierro, you can continue walking one 9 km along the path to the Cascades of Huéznar or go by car from San Nicolás del Puerto, which will take about ten minutes. The Cascades of the Huéznar and its source is a spectacular space, with an intense green color and the sound of water falling through the different waterfalls, which you will not need more than half an hour to reach.

The Ruins of Mulva are an archaeological site located in the Sierra Morena, 8 km from the municipality of Villanueva del Río y Minas in Seville. It was discovered in 1767 and identified as a pre-Roman sanctuary, although it is still popularly known as the “Mulva Castle”. It begins at the Train Station of Arenillas and ends at the Villanueva del Río station, which means a total of 12.3 km in length and three hours in motion. The difficulty is easy, the route is linear and no permission is required, so this path is perfect if you want to do an improvised route. 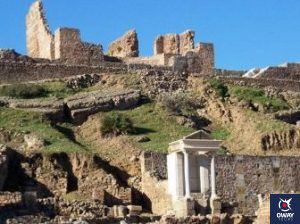 The Ruta del Agua (Water Route) is located in the first foothills of the Sierra Morena and is about 9.6 km long with hardly any difficulty, making it suitable for all types of public. One of the starting points can be the Gergal Station, which is a circular route from the Cantina. It has a slightly steep climb, but don’t panic! You will be able to do it without effort and the path becomes flat after a short time. During the journey you will enjoy the Serrano Lakes, the pines, oaks and strawberry trees and you can stop at one of the many viewpoints on the banks. It is a beautiful route that you and your family will love.

This route is located in the western area of the Sierra de Sevilla, on the border between Extremadura and Seville, where the village El Real de la Jara is located, a village surrounded by impressive pastures and where a large fortress is erected. The route starts from the town of El Real de la Jara itself, in the direction of the Casa Batrocal and continues along the arrojo de las Víboras and the Rivera de Cala until it reaches the Castillo de las Torres and returns to the town. It is a little over 11.5 km long and it is a circular route, although it is a little more advanced in terms of difficulty, so we only recommend it if you are already experienced in hiking. This route is very fun because some paths are interrupted by streams that you will have to cross, so remember to bring comfortable shoes. 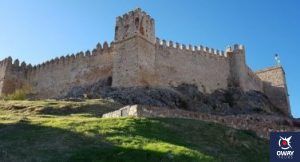