The Best Vegetarian Restaurants in Cadiz 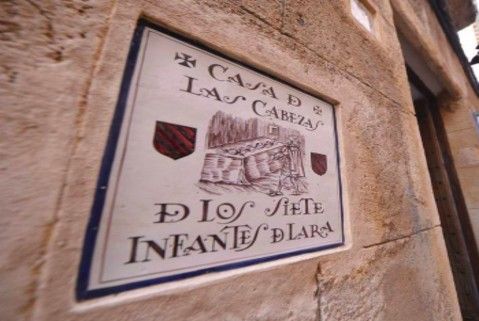 The history and essence of Cordoba can be seen from many perspectives or places. And the patios are one of the most important centers for, if possible, exploring a little more in a place as diverse as it is fascinating, which always has something new to offer.

In this respect, among the colorful patios of Cordoba, one stands out especially: the Casa de las Cabezas (House of Heads), a name that offers clues… as it is a place of worship for lovers of legends. You cannot leave the city without seeing the patios of Cordoba, the best way to do this is with the guided tour of the Patios of Cordoba.

Hidden synagogues. Decapitations and family vendettas… are some of the stories hidden in the Casa de las Cabezas, an essential enclave in the city of the three cultures.

What exactly is the Casa de las Cabezas?

It is a restored medieval dwelling that hosted events as striking as they were chilling. In addition to the legends, the place is of special interest because it offers the same layout in which its inhabitants lived at the time, even the furniture and objects of the rooms. You will not find it difficult to travel back in time thanks to the experience of this authentic manor house, so typical of Cordoba.

History and Curiosities of the House of the Heads of Cordoba

The manor house converted into a museum in 2014 is located in Cabezas Street.

From the Seven Infants of Lara to a Hidden Synagogue

Legend states that the events recounted in the classic Song of Gesta (Cantar de Gesta) took place in this house. According to tradition, it was fortress to Almanzor and prison to Gonzalo Gustioz, father of the Seven Infantes of Lara, who had the misfortune of seeing his sons beheaded. Their heads would be presented to their father on silver trays.

After that, the heads would be displayed as trophies in the alley: one would be hung for each arch. This is reflected today in the configuration of this narrow street: it has seven small arches and the main street still bears the name Cabezas.

But the legends are not only about revenge: the building also belonged to a Jewish family who secretly turned it into a synagogue to escape the Inquisition. The owner of the house during medieval times, Juan of Cordoba “de las Cabezas” was a rich merchant accused by the Inquisition along with 150 other people of turning the house into a synagogue.

There is no solid evidence of this fact, only a kind of ‘baptismal font’ has been found to carry out the rituals of the Jewish faith. A Jewish ritual bathtub (“miqve”), a symbol in all Jewish temples, which meets all requirements, especially that pure, running water should be provided.

In the basement of the Casa de las Cabezas you can see the stables, the cattle tools and even an original pool from the Roman period. 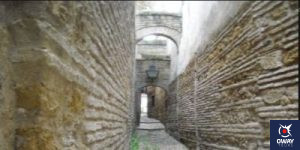 Four patios to match the mystery

The four courtyards that the current monumental complex presents are the best scenario to materialize the fantasies or history that took place here. Each courtyard offers its own personality: but never without leaving aside the scent of orange blossom or fountains with the murmur of their fountains as mantras.

Cordoba is a city with thousands of places that you cannot miss. Click on the following button to discover some of the most surprising places in this city: 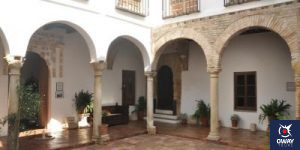 As you will see, a visit to the Casa de las Cabezas becomes a matchless experience. And if you prefer to immerse yourself even more in the mystery, it is possible to visit the house from 20:00 onwards…

Due to its location in the historic center of Cordoba, it is recommended that you arrive on foot. This way you can stroll through some of the most wonderful streets of the Jewish Quarter and the Axerquia. These neighborhoods are part of the network of streets that you can enjoy with the Córdoba Free Tour. It is only a few meters away from San Fernando Street, popularly known as Calle de la Feria (Fair’s Street). The river is also just a few meters away, a place to walk and make time after discovering this wonderful place.

If you want to arrive by public transport, lines 1, 3, 7 and 12 will leave you very close to your destination.

If you’d rather get there by car, you can park on the other side of the Guadalquivir River and walk across the Miraflores Bridge. The Casa de las Cabezas is just a few meters away from here and you can take a walk across the bridge enjoying the incredible views that this area has to offer.

The price to enter the Casa de las Cabezas is 5 euros. Children under 10 years of age can enter free of charge.

In short, in the city of light you will find reminiscences of a Roman, Arab or Jewish past… and now, thanks to the Casa de las Cabezas, you can get to know the most mysterious and medieval side of Cordoba. A city that, in Oway Tours, no matter how much we know about it, it always offers something new. To finish off discovering other material memories we have of Arab art today, we recommend the guided tour to Medina Azahara and the Mosque-Cathedral of Cordoba guided tour.