What Andalusia is known for - Oway Tours

Santa Cruz district: a walk through the soul of Seville

Living Museum of Al-Andalus in Cordoba 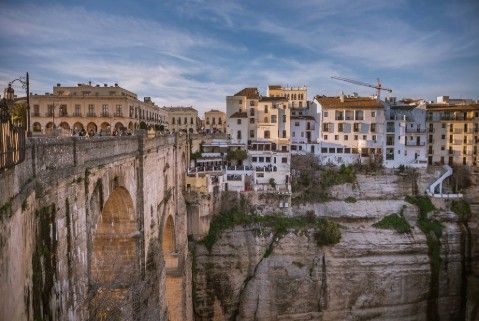 Flamenco, bullfighting, a laid-back way of living… Did you know that most of the stereotypes you have always associated with Spain are mainly Andalusian?

Andalusia is Spain’s southernmost region and also the Spanish Autonomous Community with the greatest number of inhabitants and the second in surface. It is home to many of the iconic cultural elements that make Spain so different from the rest of Europe. Here you will experience flamenco and bullfighting at their most authentic style. In this article we are going to present to you all the aspects Andalusia is better known for.

Flamenco is an artistic expression fusing song (cante), dance (baile) and musicianship (toque). Andalusia is considered the heartland of Flamenco. It has influences in Jewish and Islamic music that was transformed by the gypsies of southern Spain. It features staccato tap dancing, rhythmic guitar strumming and passionate singing.

Originally linked to vagabonds and the lower classes, flamenco has become music for the masses, not only in Spain but within the whole world. In November of 2010, it was declared Intangible Cultural Heritage of Humanity by the UNESCO.

Rustic taverns and decorated caves have long been the preferred venues for flamenco, and visitors can still enjoy a live flamenco show in the numerous haunts around most Andalusian cities.

Bullfighting is a tradition originated in Andalusia. Bullfighting as we know it today started in the town of Ronda, Málaga, whose ancient bull ring there continues to attract aficionados and it is home to the traditional Corrida Goyesca, celebrated annually. Seville also has a prominent bull ring, La Maestranza.

There is no doubt that bullfighting is a controversial subject. For some, it is just a bloody and cruel practice, and are actively fighting for its extinction, while others consider it an art and adore the moves of the matadores and the rush that comes as the bulls charge down their enemies. Anyways, it is undeniable that it is one of the defining elements of Andalusian culture.

There are 70 bullfighting arenas in Andalusia. Bullfighting is so deeply rooted in this region that even today the arenas brim with people, especially during the ferias.

The Andalusian way of life is distinctly laid back and drawn out, just how the locals like it. The traditional siesta breaks for long lunches and naps around midday still exist here. Many Andalusians also indulge in tapas during the evening. Tapas are small dishes served in bars and cafes along with wine or beer as a sort of casual dinner substitute, though you can enjoy them at lunch time too. During the weekends, the nightlife lasts until near sunrise.

Holy Easter Week or Semana Santa is a big deal in Andalusia. Watching the ‘procesiones’ (parades) for the first time is something you won’t easily forget. Observing religious sculptures paraded through the streets followed by a trail of nazarenos while listening to the solemn music of the bands and smelling the incense floating in the air is a unique experience.

The Carnival of Cádiz is one of the best-known in Spain. What makes it so special and different from other carnivals around the word is humor. Aside from people flooding the streets dressed up in customs, the highlight of the event is the contest of ‘chirigotas’ that sing about the current affairs through sarcasm, mockery and irony.

There are also many ferias happening throughout the year, being the Feria de Abril in Seville the most traditional and representative, and the Málaga one, in August, the most open and welcoming for the foreigner.

The rich and varied gastronomy of Andalusia is a reflection of its tumultuous history. For example, gazpacho, one of its signature dishes, was introduced by the Romans in the first millennium BC, and didn’t reach its final version until peppers and tomatoes arrived in Spain after the voyages of Cristobal Colón.

The Moors also changed deeply the Southern Spain cuisine with the planting of orange, olive and almond trees. They also introduced spices such as cinnamon, nutmeg, cumin and saffron, and vegetables and fruits like spinach, aubergine, quince and pomegranate.

Notable dishes in the area include the aforementioned gazpacho, fried fish (pescaíto frito for the locals), the jamones of Jabugo, Valle de los Pedroches and Trevélez, and the wines of Jerez, particularly sherry.

The worldwide renowned painter Pablo Picasso was born in Málaga in 1881. The famous actor Antonio Banderas hails from Málaga too. It is also a land of writers such as Federico Gaarcía Lorca. Furthermore, the region was once the love object of world-famous writer Ernest Hemingway and the English poet Lawrence “Laurie” Lee.

Christopher Columbus (Cristóbal Colón in Spanish) left for his famous 1492 journey, which led to the discovery of America, from the Andalusian harbour of Huelva.