Cabildo Square in Seville, a place with its own essence

Cordoba: Let yourself be amazed by the charming corners of the city

Bib-Rambla Square in Granada, where the roads meet 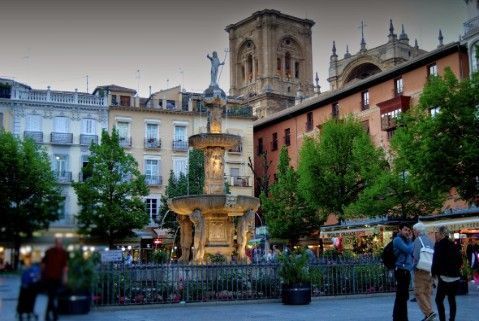 Also known as the square of the Flowers, it is one of the most iconic squares in Granada: it has hosted all kinds of events, from celebrations in Arab times, to bullfights or even executions in the time of the Inquisition after the Conquest.

With a history as extensive as it is versatile - it has undergone several transformations throughout its existence - it is today one of the most important squares in the festive life of Granada, as it celebrates the Day of the Cross or the iconic Corpus Christi, and at Christmas, it is the centre of the Christmas market and the exhibition of cribs.

With a labyrinthine configuration between souks and intricate streets, its birth dates back to the time of the Nasrids, being originally one of the commercial centres and strategic centre of Granada. From Muslims to Christians, this square has undergone a series of profound transformations and even fires, from which it has managed to survive.

Thus, this square has witnessed the birth of the city of Granada, and even today remains one of the social centres of the city.

This iconic square owes its name to the Bab al-Rambla Gate or Arenal Gate, one of the main gates in the wall leading to the city.

Throughout its extensive history we can recognize two eras, the Muslim first and the Christian after the Conquest. In the first Muslim era was a strategic center for its proximity to the main mosque and the souk of the city, so it was the centre of trade in the city, in addition to being the social centre of various festivities.

After the Christian Conquest, the square came to have a slightly less festive usage as it was the seat of the autos-da-fé to condemn those considered heretics by the Inquisition. But not only that, this place saw how almost all the library of Madraza disappeared... The reasons? Books and manuscripts that did not follow the directives of the Inquisition passed through the bonfire, disappearing forever.

Later, the square would continue without escaping the flames: it suffered three major fires - one in 1843, another in 1879 and the last one in 1982. After these fires the square would undergo important modifications.

Description of the Bib-Rambla square

Surrounded by monumental buildings, the centre of the square is undoubtedly the fountain of the Giants, whose origin dates back to the seventeenth century. Near the fountain the houses of flowers were changing throughout the year to offer flowers at Christmas, Mother's Day, the day of lovers ...

In the perimeter of the square there are numerous coffee shops and restaurants where you can sit down to enjoy a good beer in the heat of the Mediterranean sun.

In short, the Plaza de Bib-Rambla is an obligatory stop in Granada, to take photos, to browse or, what is best, to enjoy life like a grenadine: in the warmth of a good beer -Alhambra of course- on the outside terrace of a bar, watching life pass peacefully.

Because this is Granada, a place to let yourself be carried away by the pleasures of life and the course of history.

When are you coming to Granada?

Also you can check our best Tours in Granada on the next links: Alhambra Guided Tour Cathedral of Granada Guided Tour Free Tour Granada
Compartir