Granada Tourist Bus: Everything you need to know

Real Alcázar, the jewel of Seville 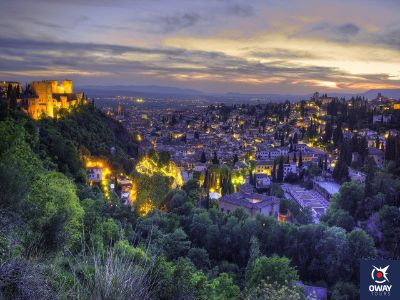 During this experience you will be able to enjoy a comfortable tour of the renowned Granada, visiting key points such as the Albaicín neighbourhood, declared World Heritage Site, the Alhambra, the Science Park Museum and the Cathedral of Granada where you will find the tombs of the Catholic Monarchs in the Royal Chapel.

And these are just some of the stops on this open-top double-decker bus, where you can choose to be in the open-top or covered area. You’ll also receive information about all the places of cultural and historical importance that are visited, and you’ll even learn interesting anecdotes that not everyone knows.

Through this experience you will be able to get to know the city in the fastest and most complete way possible. The tour lasts approximately 80 minutes, visiting the most emblematic places of Granada.
The route starts at the Cathedral, as the only departure point, and is available every day of the year. It should be noted that the ticket price for the tourist bus does not include entrance to museums and places visited. 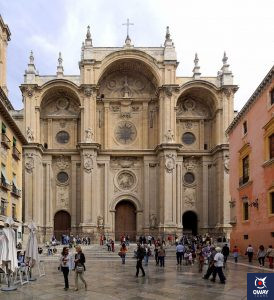 The bus makes 11 stops, where you will be able to enjoy in detail the place to visit.

Next we will visit the Acera del Darro, arguably the most beautiful street in Granada. It owes its name to the Darro River, which was the backbone of Muslim Granada, as it supplied water to the palaces and gardens of the Alhambra.

The Alhambra, the jewel of the route through Granada. A complex of ancient palaces, gardens and fortress initially designed to house the emir and the court of the Nasrid Kingdom, later to be used as a Castilian royal residence.

The Palacio de Congresos is a convention building where important congresses and trade fairs are held, as well as concerts and shows.

It is the first interactive science museum in Andalusia. It is located in a central area of Granada and has become one of the main tourist attractions of the city.

A place full of history. It was the former family residence of the García Lorca family during the summer and a fundamental place in the poet’s artistic production.

This stop will take place in one of the busiest streets of Granada, with numerous shops and restaurants.

During this stop, you will get to know the large campus of the University of Granada and the different faculties associated with each of them.

The Royal Monastery of Nuestra Señora de la Asunción de la Cartuja, considered an Asset of Cultural Interest, has housed a community of Carthusian monks since its foundation in the 16th century. It has an exuberant decoration, with authors such as Antonio Palomino.

Finally the last stop will take place at the Plaza de Toros, a historic place in the city of Granada, where important bullfights and other public spectacles have been and still are celebrated.

This experience is available every day of the year. The first departure will be at 9:30 in the morning from the cathedral and depending on the date on which the route with the tourist bus will take place, it will have one frequency or another.

From 16th November to 15th March the frequency for taking the Tourist Bus is 40 minutes. From 16th March to 31st July and from 16th September to 15th November the frequency will be 30 minutes and finally the shortest frequency will be from 1st August to 15th September, and it will be about 20 minutes, perfect for this time of the year when temperatures are usually high, so you don’t have to wait too long for the bus.

Please note that the ticket will be valid for a maximum of two days from the date of purchase. 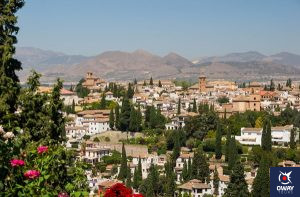 Enjoy our unbeatable services in Granada!

Guided Tours of Cathedral and Royal Chapel of Granada

Guided tour of the Albaicín and Sacromonte