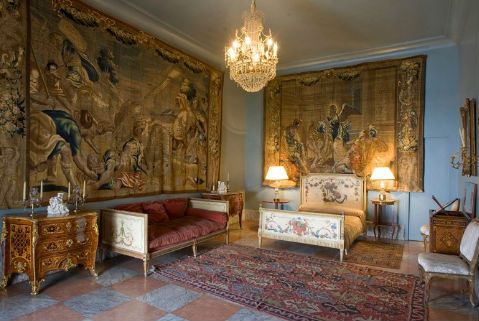 Cordoba has several palaces and houses of ancient character, in particular the Viana Palace and the Palace of La Merced.

The Palaces of Cordoba

The palace of Viana is a stately home from the 15th to the 19th century. In this magnificent place you will have the opportunity to visit an aristocratic house which is also a museum. You will be able to enjoy and admire the life and tastes of the upper class people of the time. Be transported to other times and enjoy the view of the different leathers and guadamecíes, tiles, tapestries, paintings etc.

The visit to the Viana Palace would be complemented by twelve patios and the garden. The patios are one of the characteristics of Cordoba and one of the most important reasons to visit the city. For this reason, the courtyards of the Palace of Viana are a place that should be visited without fail. These courtyards pay homage to plants, light and water. And they are one of the most important spectacles of Cordoba’s culture.

In Cordoba we can also find the Palacio de la Merced, which is currently the seat of the Cordoba Provincial Council. In the past it was a convent of Mercedarian monks and has a great history behind it, so it is a highly recommended place to visit. In this palace, remains of Roman ashlars, a baptistery and a crypt have been found.

Around 1700 a church with a Latin cross plan inscribed in a rectangle was built in what is now the Palacio de la Merced. Today you can enjoy the old church of La Merced inside this wonderful palace, as it was restored for its use. Once the church was built, the cloister and a spectacular imperial-type staircase with a quadrangular box were constructed. It is made of different coloured marbles giving it a period atmosphere worth visiting.

The facade of this palace has been the one that has had better conservation in comparison with the interior of this magnificent space. Even so, the southern façade was created in 1960 and is decorated with a large sundial, the work of the same architect who created this façade.

This building is not only an architectural work with a great history and a place to visit, but it also houses a series of collections. Most of the works stored in the palace come from the former convent, which was also the oldest in the collection. Among these older pieces, one of the most notable is a guild goblet adapted to a ciborium, probably a Flemish work from the 16th century. In this palace we can also find collections of both painting and sculpture, among these the canvases brought from the Museum of Fine Arts and the figures created by Mateo Inurria Lainosa stand out. In addition to these older works, you can also enjoy different paintings from the 20th century.

A very peculiar Palace that hides not only its own history, but also has different architectural constructions and a great number of works of art of all kinds. A place you cannot miss.