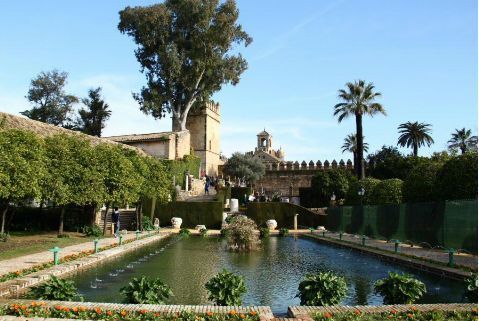 Christopher Columbus' request for funds from the Catholic Monarchs for his great journey. The cruelties of the Inquisition. The unprecedented Muslim channelings and advances for those times...

These are only some echoes of the stories that enclose the walls of the Alcazar of the Christian Kings, some of them would change the course of history forever. Others would leave some advances and an essential legacy that we can enjoy today.

Be that as it may, the Alcazar of the Christian Kings is much more than a medieval fortress: its walls represented an indisputable centre of power in the comings and goings of the different governments -and cultures- that shaped Cordoba as we know it.

That's why today at Oway we take you on an exciting historical tour of one of our favourite monuments in Cordoba...shall we begin?

What is the Alcazar of the Christian Kings?

Throughout its life it has had different uses that we will explain you later, however, today it is consolidated as a monument and cultural centre that hosts events and exhibitions, as well as festivals.

Thus, the Alcazar was registered as an Asset of Cultural Interest in 1931, in addition to being part of the historic centre of Cordoba, which was declared a World Heritage Site by UNESCO in 1994.

- Did you know...? In 2016 the Alcazar received half a million visitors, which positions the monument as the third most visited place after the Mosque and the Synagogue.

History of the Alcazar of the Christian Kings

From its origins, this fortress has been considered as a conquest at the strategic level by the different governments. During the Roman period it was consolidated as the seat of customs and the official residence of the rulers until the arrival of the Visigoths. However, it was not until the Muslim conquest that the building was modified.

During the time of the emirate of Abd al-Rahman, the fortress reached one of its greatest periods of splendour thanks to the construction of advances such as gardens, stables or canals that allowed watering the gardens and giving life to the fountains.

This peak would later be extinguished by the brightness of Medina Azahara, moving the axis of power to the outskirts of the city. After that, the Alcazar was practically forgotten and was affected by the looting that devastated the city. For a short time: since, in 1236, after the Christian reconquest, the fortification that we know today with vestiges of the primary construction would rise on the ashes of the Alcazar.
Alcazar of Cordoba Guided tour 18€ Book

Alfonso X the Wise fitted out the place as a royal residence, after which the fortress would witness the encounters and love affairs of the royalty. It was not until 1482 that the Alcazar would be used again as a headquarters, and it served the Catholic Monarchs to plan the reconquest of Granada in 1492. In that same year Cristopher Columbus shouted "Earth! After having requested the help of the kings for his adventure, where? Between the walls of this same fortress.

A story that would be overshadowed with the arrival of the Tribunal of the Inquisition at the Alcazar, becoming the scene of torture in the dark dungeons of the place. Three centuries of Inquisition. Until the 19th century.

The Cadiz Cortes abolished the Holy Office and since then, the place was used as a civil prison first, and later as a military prison. In 1955 the use of the fortress would begin to be cultural, thanks to the cession to the City council of Cordoba. As you can see, this fortress has a fascinating history, which awaits to be discovered by you.

What are you waiting for to visit the Alcazar? To learn more about guided visits in Cordoba, click on the link down below:
Compartir