Why is the Mosque-Cathedral of Cordoba so important?

The architecture of Medina Azahara, a city ahead of its time 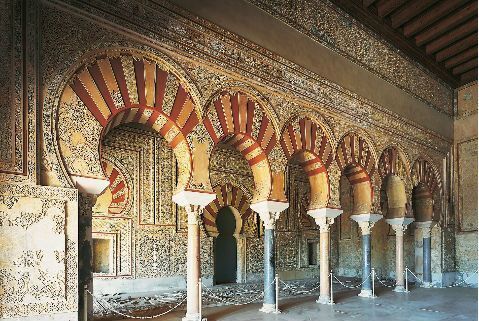 Kneeling before the Cordoba mountains is Medina Azahara or Shining City: an example of Caliphate splendor with a curious architecture and a history that left us some essential advances in our days.

Known as the Medieval Versailles, the Shining City has seen its splendor obscured by the passage of wars, plundering and oblivion.

Fortunately, however, this caliphal city has risen from the ashes to obtain the recognition it deserves, as it has finally obtained its place on the list of World Heritage Sites.

A news that we received in July, and to celebrate it today we make a review of the architecture and milestones in the form of advances that has left us the largest caliphal city of its time… Are you coming?

First of all, a little bit of history

It was built by Abderraman III in 936 on the outskirts with the aim of fixing the administration and power of the caliphate in a single place to be the symbolic center of the power of his mandate, so this enclave was designed to intimidate his enemies: the Umayyads.

The architecture of Medina Azahara

The site is made up of the archaeological remains of the ancient city, so it is made up of streets, the private house ‘Casa Yafar’, the great Portico, the Mosque or the upper caliphate building, among others.

A tour seasoned by the impressive porticoes and arches of Mudejar style carved with intricate arabesque shapes representing geometric shapes and vegetation.

Regarding the style is Caliphate and the typology is ‘Palatine City’.

Levels of the city

In terms of the topography of the site, we find three different levels that allowed the hierarchy of the parts of the city.

The highest level is the center of the main power: the residence of the caliph who dominated the city.

In the middle step are the administration and the most important houses of the court officials.

At the foot are the dwellings for the townspeople and soldiers, so the mosque, the market, the baths and the public gardens were located.

As for the general scheme, there is a notable differentiation between public and private spaces, the latter being an exponent of the luxury of the time.

Parts and elements of the city

Great Portico: this is the eastern entrance to the Alcazar, guarded by fifteen horseshoe and segmental arches.

High Garden and Low Garden: the imposing gardens are an example of the use of water in the Caliphate gardens.

North Gate: it opens in the center of the wall and only remains of the stone ashlars.

Lower basilica building: this large building has a use that experts have not yet been able to define. Located in the eastern part of the Alcazar, it has a basilica plan with five naves.

Salon-Rico Palace: it is one of the most valuable parts both artistically and historically. It was the center of the palace and the symbol of the city.

Other places of interest:

Medina Azahara and its technical advances

For example, by the middle of the 10th century the city already had a network of running water that supplied all its buildings and the elite of scientists, musicians, astronomers, philosophers and mathematicians.

But not only that, the city paid attention to hygiene, a unique advance in medieval times. The use of deodorants, shampoo, toothpaste and frequent change of clothes was promoted.

Today, and more than ever after the appointment, it is possible to visit Medina Azahara to enjoy a piece of history in the form of archaeological treasure.