Curiosities about the Triana Bridge

It is an emblematic architectural gem of the city of Seville that has gone down in history, becoming an obligatory stop. This is so not only for its construction but also for keeping many secrets that you will have the opportunity to discover:

Also known as the Isabel II Bridge as it was inaugurated under her reign. It was built between 1845 and 1852, being the oldest bridge in Seville that links the city centre with the Triana district on its way through the Guadalquivir River. It stands as a paradigm of the industrial architecture of the 19th century peninsula. Its extensive construction over time extends into the 19th century, which has made it difficult to consolidate as a fixed bridge located next to the river.

The Romans, due to problems with the foundations of the land near the river as it was soft and sandy, rejected the idea of joining the banks of the river by means of a stable bridge. The Arabs in 1171 chose to build a bridge under the Caliph Abu Yacub Yasuf, the Bridge of the Boats, but this attempt simply consisted of a series of moored boats on which they laid planks. This wooden bridge, built by the Arabs, was moved a little further down the riverbed, taking it to the Maestranza, when the construction of the current bridge began. 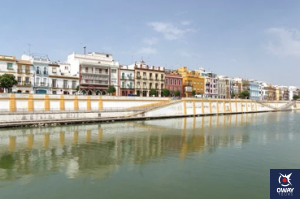 Taking as a model the Carrousel Bridge built in 1834 by the engineer Polonceau, as of today disappeared in Paris, its plan shows many similarities. It remains as a living testimony of a construction method that was developed thanks to innovations in iron techniques.

For the Seville project, a public tender was presented in December 1844, with the condition that the execution period be set at three years. In February 1845, six proposals were presented with different deadlines for payment. Finally, the project of the French engineers Gustavo Steinacher and Fernando Bernadet was finally chosen. Both of them had already worked on the construction of a bridge in Puerto de Santa María.

In addition, they were also contracted to move the Barcas Bridge further south so that the new 149-metre long and 7-metre wide bridge could be built in its place. 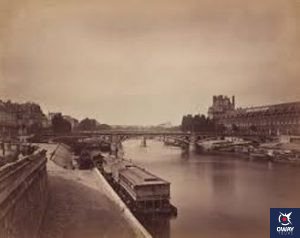 Stone and iron pillars were used to build the bridge, excluding the use of wood. In addition, it was imposed that all the castings used were made in Spain, specifically in the workshop of the Bonaplata brothers in Seville. This boosted the industry in the city, reaching one of the highest European levels in terms of market and structures. 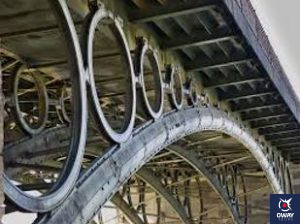 Don’t miss the opportunity to visit two of the most symbolic monuments in Seville. Click on the button down below to learn more:

The weight tests were carried out in January 1852 and the inauguration took place in February of that year with a procession that began in the parish of Santa Ana in the Triana district. Some important personalities were present, such as the civil governor Francisco Iribarren, the archbishop and the captain general of Seville. On the same day, the bridge was blessed and numerous festivals were held throughout the municipality such as swimming competitions and concerts by brass bands. It was not until June that the bridge was opened to the public after an ordinance was approved. 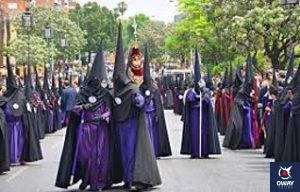 It is a Property of Cultural Interest that, in April 1976, was declared a National Historical Monument under the ownership of the Seville City Council. This fact led to a restoration that made it still operative today. The bridge is protected for its conservation, as it was about to be destroyed to build a new one in its place.

Moreover, only a few minutes on foot from the bridge you can visit the most significant monuments of the Sevillian capital. In Oway Tours we recommend guided visits such as the guided tour of the Alcazares of the city,  the guided visit to the Cathedral and the Giralda, and an exclusive Free Tour that will let you enjoy the city of Seville in a unique way.

Its enclave, when it was still known as Puente de las Barcas, has been fundamental in two battles in which attempts were made to take the city: 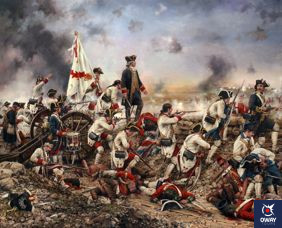 Between the 50’s and 60’s the idea of decorating the Triana Bridge with a statue of Isabel II or with a pair of lions holding the coats of arms of Spain and Seville was considered. However, the project was rejected in the end. 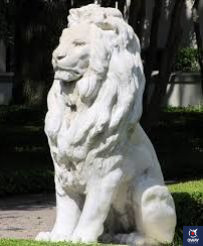 It was built with bricks and Triana ceramics by Aníbal González in 1928 right at the end of Triana and is joined to the bridge forming a whole. Next to the chapel composed of two bodies and finished off by a small temple there is a bell tower with an octagonal floor plan. In this temple can be appreciated the images of Santa Justa and Rufina and the Giralda. Since the door of the chapel is made of glass grill and the cost of the entrance is free, the worship of the faithful is practically permanent. Also, this chapel is popularly known as ‘the chapel of the lighter’. 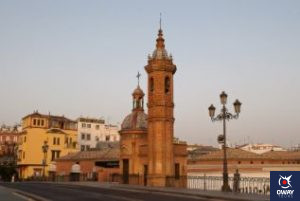