▷ 5 Curiosities of Cordoba you should know | OWAY Tours 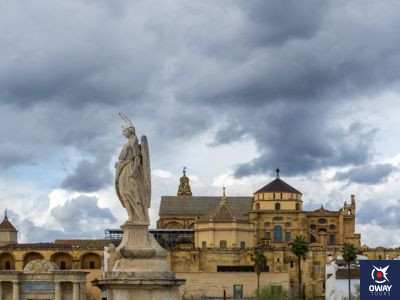 Cordoba, province of Andalusia, receives thousands of tourists a year from all over the world. Cordoba is visited for its mix of cultures, for its people, for its gastronomy, for its flamenco and art. All this makes this city beautiful in every way.

Cordoba is a city with a lot of charm and with a historical and cultural heritage that is worth knowing and you will be absolutely impressed. Its main tourist attraction is the Mosque since it is a World Heritage Site. Moreover, not only that but Cordoba is the first city with four declarations of World Heritage.

You cannot miss visiting this place, where you can enjoy thousands of things and plans to do and in which we are going to show you some of the curiosities of the city that perhaps you did not know and that will make you come to visit Cordoba, even once in your life, because it will remain engraved in your memory.

Cordoba has wonderful places and curiosities in which you will be completely surprised, so, if you want to visit the city of Cordoba, do not think about it, because it is one of the cities that you must see before you die and in which in every corner of the city there are curiosities.

One of the most important curiosities is that the historic center of this impressive city is one of the largest old quarters in Europe.

The historic center is formed by roads that in turn coincide with the old wall, and thanks to this the historic center has been safeguarded from urban expansion. This historic center is divided into two distinct parts. The first is the old Muslim Medina which is located to the west and the other is the Axerquia, which preserves late medieval Christian temples.

This set is formed by narrow and irregular streets that come to form irregular blocks and all its buildings respond to a typology inherited from the Muslim house, which is called house-patio, whose image is the famous “Fiestas de los Patios de Cordoba” which are also declared Intangible Cultural Heritage of Humanity by Unesco. 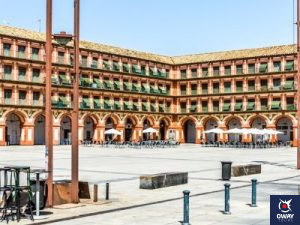 This festival has been held in Cordoba for more than 30 years, although it is not internationally known. This festival is one of the most important events for lovers of the guitar in all its styles.

This festival is held in the month of July and is a cultural event with a monographic character and in which there are various musical and artistic manifestations.

The guitar festival offers a training program, which is a training course on the construction of the guitar and its corresponding composition, dance and flamenco. It also offers a program of concerts and shows where all musical styles with the guitar and also attract great artists.

The training offer also has a series of complementary activities in which it has traditional days either of study on the history of the guitar, or exhibitions. 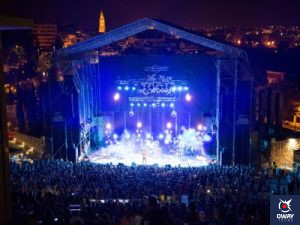 San Rafael is the patron saint of the city of Cordoba, so in the center of Cordoba you will find 10 statues of the Archangel of San Rafael as he is considered the protector of the city. These statues are in different tourist spots such as the Plaza del Potro or in the impressive Roman Bridge.

The people of Cordoba feel an enormous popular devotion for San Rafael. In addition, one of the curiosities is that, in the years of hardship or epidemics, the Cordobeses entrust themselves to their Saint Custodian.

The San Rafael of the Roman bridge is the oldest of all. This was the work of Bernabé Gómez Río and the sculpture dates from 1651. It was placed on the Roman bridge to bless all the visitors who came and went through the gate of the bridge.

One of the most colorful sculptures of San Rafael can be found near the door of the bridge. This sculpture was made in the 18th century. It is formed by an ethereal column that supports the Archangel and that stands on a tower that sinks its walls. All this has an explanation and is that they are symbols of the underworld, the earth and the divine. 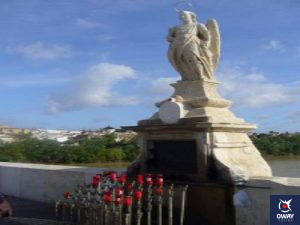 One of the curiosities that perhaps we do not know is that in the city of Cordoba in the subsoil there are tunnels and secrets that hide stories of mystery and passion.

Many of the Cordobeses, when doing works, have assured that it is true that these secret passages exist since they have seen corridors in the subsoil. These corridors are described as deep spaces, with a significant darkness, with varying heights depending on the area and made of stone, brick or vaulted. In addition, there is a network of channels that allowed rainwater to be carried to the houses.

In this city we can see the reflection of a past with more than 2000 years in which we observe the presence of passages or tunnels under the floor of the city. 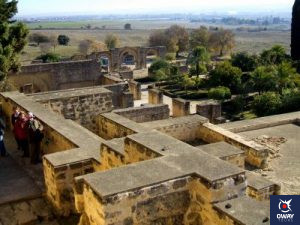 The Festival of Patios

The courtyards have been declared Intangible Heritage of Humanity by Unesco. The festival of the patios has been taking place since 1918 and this is usually held in the month of May, which is the “Month of the Cordoban Patios”.

Thousands of people choose Cordoba as a destination to visit the Cordoban patios as it is one of the main tourist attractions of the city.

The courtyards are an open space of the house and this serves as lighting and ventilation of the rest of the rooms, and this is the place of coexistence and the center of family life. The image of the courtyards is inherited from the Islamic house. This patio is distinguished by being filled with a multitude of flowers planted in flowerbeds or pots and often hanging on the walls. Many of these courtyard houses were also formed by a well or a fountain that makes the courtyard more beautiful. In addition, the owners of courtyard houses include antique furniture or archaeological remains.

You cannot miss the Cordoban patios, since each one of them has a unique architecture that will surprise you and make you fall in love with the city. In addition, you will be able to observe two types of courtyards in which one corresponds to an ancient architecture and others correspond to a more modern architecture. 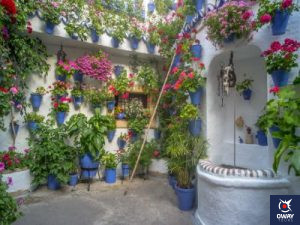