Why is the Mosque-Cathedral of Cordoba so important? - Oway Tours

The architecture of Medina Azahara, a city ahead of its time

The Mosque of Cordoba and the mestizo character of its architecture

Why is the Mosque-Cathedral of Cordoba so important? 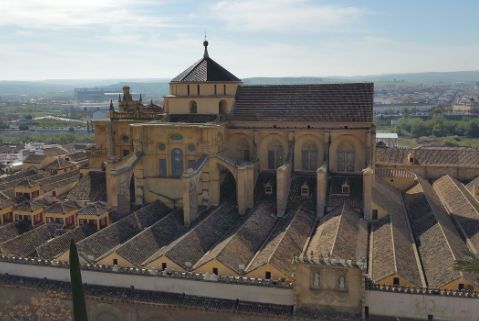 The Mosque-Cathedral of Cordoba embodies like few other monuments the soul and identity of a city born from the confluence of cultures. A mixture that has given it a unique character, where the Andalusian duende is mixed with the ancient history, not only of Spain, but of the world.

Thus, the Mosque was positioned as the second most important temple in the Muslim world, only behind Mecca itself. The visceral crossbreeding of the Mosque today is crystallized in the overlapping and mixing of architectural styles.

Cathedral with the soul of a Mosque. Center of religious and historical power. Beacon of knowledge that advocated the arrival of the Renaissance… These are just some of the prisms of the importance of something more than a monument: it is an icon and an emblem that is the breath of Cordoba.

Do you want to know the importance and influence of the Cathedral Mosque in history and some facts and curiosities you didn’t know? Today in Oway we tell you everything you need to know about a monument that has fascinated us… Don’t miss it!

Mosque-Cathedral: the union of two cultures

Monuments have the ability to possess a unique personality conferred by history and the people who inhabited its walls. Thus, the Mosque has the singular characteristic of being a unique temple in both the Islamic and Christian worlds. Its historical importance is only comparable to that of the Alhambra in Granada.

Since its construction as a mosque in 786, it was positioned as the second largest temple in the world, only behind Mecca. This position lasted until the construction of the Blue Mosque.

In this way, the place would function as a mosque until the reconquest in the thirteenth century, where it would be used as a cathedral after its consecration.

On a spiritual level, the temple would be a key piece in the religious panorama, which would also be reflected in the consecutive reforms over the centuries that have given it a unique character.

As an example of this, today it brings together the Umayyad, Gothic, Renaissance and Baroque styles.

A high altar in the middle of a forest of jade and marble columns. Byzantine mosaics in the mihrab framed by Renaissance central naves… These are just some of the contrasts in the Cathedral Mosque.

A curiosity? The original mosque was built on the remains of the ancient Hispano-Roman basilica of San Vicente Mártir, readapting its characteristics and reserving its use for Muslim worship.

The walls of the Mosque witnessed the debates on philosophy, science and literature in which the scientists and philosophers of the time participated. Muslim philosophers such as Averroes were forerunners of scientific knowledge in the dark ages of the Middle Ages, and the Mosque was witness to this.

For all this and more, the Cathedral Mosque is considered one of the most important monuments in Europe and the world. Its importance would materialize in 1984 after its nomination as a World Heritage Site by Unesco.

If you want to get lost within its ancient walls and relive the stories that enclose its corners, we recommend you to visit the Mosque if you come to Cordoba.

So that you don’t miss anything, at Oway we have a guided tour of the Cathedral Mosque so that you can learn first-hand stories that don’t appear in the guidebooks.

Because the history of Cordoba is our passion, and we want to share it with you.

Do you dare to discover Cordoba?