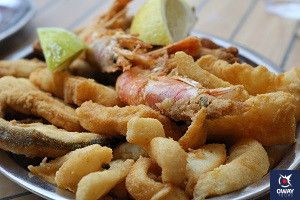 The city of Cadiz, as the capital of the province, has one of the most varied gastronomic traditions in Andalusia. This is due to the availability of ingredients from the countryside, the mountains and, of course, the sea. In recent times the tasting of popular dishes in the area has become a tourist attraction thanks to the publication of guides and articles in renowned newspapers such as The New York Times or The Guardian. However, the coastal town has an ancient relationship with the culinary art. Thus in documents from the nineteenth century highlights the trade and use of different tools for cooking that is done in Cadiz.

Foods of marine origin have been a fundamental part of Cadiz’s cuisine since ancient times. The first settlers of this area consumed an abundance of seafood resources, as evidenced by the archaeological remains of Phoenician salted fish. Although Cadiz does not live by the sea alone, if you take a trip to the villages in the Sierra de la Grazalema you will find another series of dishes.

One cannot leave Andalusia without trying the famous fried fishes. Of course it should be a crime to visit Cadiz and not to eat them.  It is actually a very simple dish that consists of different types of fish, such as anchovy, sardine, red mullet, whiting or mackerel, battered and fried. Sometimes other animals such as squid, cuttlefish or prawns can be included. In almost any establishment, especially if it specializes in tapas, they will have it on the menu.

You can also find it under the name of bienmesabe. Apparently, it may even look like croquettes, but in reality it is another fish batter. What makes this dish really special is the sauce in which the fish is marinated, which is generally made of garlic, paprika, cumin, oregano and sherry vinegar. It can be made with other spices and even another type of white vinegar but the above is the most traditional mixture. The recipe dates from the 19th century although it is probably earlier. By the way, this fish is a type of small-sized shark.

More than an omelette, as understood in Spain, this would be a kind of pancake. There are also people who call them fried tortillas. There is a debate about the origin of the recipe. Some believe that it could be the result of mixing Genoese farinata and Spanish gachuelas, thus creating an Italo-Hispanic dish up to five centuries old. The shrimp is mixed with wheat and chickpea flour, spring onion, parsley and water until a compact dough is obtained, which is then fried. The ideal way to eat it is when it is crunchy on the edges but tender inside. 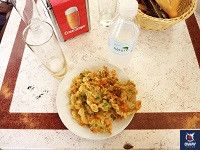 It is a traditional stew, with its potatoes, peas, onions and peppers, but instead of meat, it has cuttlefish. It is not really unique to Cadiz, as in Huelva they also cook it this way. Anyway, don’t hesitate to order it in the restaurant because it’s really good. 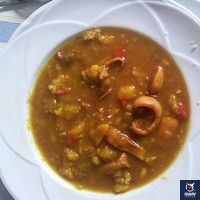 The ortiguillas are a type of anemone that occur abundantly in the Mediterranean Sea, although they are also frequent in the Atlantic. Its scientific name is Anemonia sulcata. You may have seen them before but not so much that you have tasted them. It is a typical dish from Cadiz and very difficult to export as the animal does not take long to spoil. To eat them you have to flour them and fry them in oil. Sometimes they are also accompanied by hake roe. 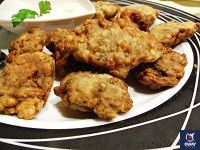 The Tagarnina is a species of thistle that occurs in the Mediterranean and western Europe. As it seems evident, its use as food began in humble areas in times of bad harvests. However, now it can be eaten by anyone and at any time. Although it can be used for rice or scrambled, the most popular is to mix it with the stew. 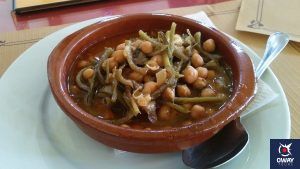 After an abundant and tasty meal it is necessary to give it a good ending. In Cádiz there is no lack of them so you can end the day with a sweet tooth. However, many are typical of different seasons or festivities.

Pestiños can be tasted both at Christmas and at Easter. Although it is a dessert that you can find outside Andalusia really the area of greatest tradition is here. A good example of this can be found in the great variety of Andalusian literature that mentions it as “ Portrait of Lozana: The Lusty Andalusian Woman” and “The Three-Cornered Hat”.

Most probably it has an Al-Andalusi origin as suggested by its similarities with the Moroccan shebbakiyya, where it is eaten during Ramadan. It is a dough made with wheat flour, wine (preferably from Jerez), sugar, lemon and salt that is then fried in olive oil.

Curiously, this is a sweet typical of Lent, although it is also customary to eat it during Holy Week. It is a dough made of flour, egg, cinnamon, lemon, sugar, cinnamon and sesame that is rolled up in a cane, which gives it its peculiar shape, and then fried and bathed in syrup. An authentic sugar bomb but very tasty in the mouth. By the way, if you are Latin American and you are familiar with this dessert, especially being from Peru, this is because the colonial tradition there evolved into guargüeros.

It’s a typical Christmas candy. In fact, the fruit nougat is derived precisely from this Cadiz dessert. It is made from a marzipan dough that is filled with jams and covered with egg yolk to be baked later, which gives it its characteristic name.