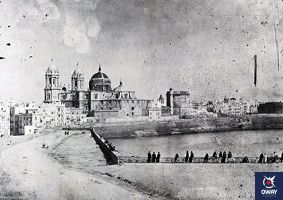 Cadiz, known as the oldest city in the West, is no exception. On this occasion we have focused on its general history from Phoenician origins to the present day, coinciding with the different stages (Prehistory, Antiquity, Medieval, Modernity and Contemporary). In this brief guide we will describe the most outstanding events that took place in the area.

In the West there was a native culture that according to historians was settled in southern Spain, a culture that will evolve through contacts with Phoenician and Greek settlers. Tartesos is part of the Final Bronze of the Protohistory, and is mentioned in the Bible as Tarsus. We are told of this place as fabulous in terms of the riches coming from its mines and fields.

The abundance of copper and silver from the mines justified the arrival of settlers from other places in the 8th century BC, mainly Phoenicians and Greeks. Greeks and Phoenicians founded permanent establishments for commercial purposes.

Gadir, the Phoenician city was among the maritime routes of antiquity. It was not as we know it today, but rather an archipelago of islands with Erytheia to the north and Kotinoussa to the south.

The Carthaginians, from North Africa, ended up replacing the Phoenicians from the 6th century BC in the Iberian Peninsula, while the Tartessians were replaced by the Turdetans. At this time it began to decline until a tidal wave and the consequences of the Second Punic War, makes fall before the Roman arrival.

Romans arrived to the Iberian Peninsula as a direct consequence of their confrontations with Carthaginians, due to the territorial extensions that both were making. In the year 237 BC, the Carthaginian army under the command of General Barca disembarked in Gadir, and began to conquer first the Andalusian territory and then the Levantine area. After the death of Barca and his predecessor, Hannibal Barca took the side that caused the arrival of the Roman troops to the Peninsula.

The final confrontation took place in 207 BC, known as the Battle of Lipa, where, defeated, the Carthaginians took refuge in Gadir until they gradually abandoned it. Rome, with no intention of conquering the Peninsula, imposed its life, its thought and its beliefs. It was then that Gadir was called Gades, a testimony of their establishment can be found in the archaeological site of Baelo Claudia, a small city that would not stand out more than 3000 inhabitants. 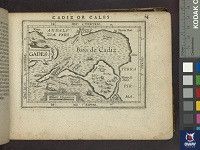 The Roman Gades is the result of a major project to extend the city, sponsored by Lucius Cornelius Balbus, a friend of Julius Caesar. The remodelling of the urban centre was next to the ancient Phoenician colony. Little remains of the Roman city, although the theatre has been preserved. It seems to be the first building of this kind to be built in the Iberian Peninsula.

The Muslims began their expansion towards the west by passing the Straits of Gibraltar in the year 711, defeating the Visigoths in the Battle of Guadalete. Gadir became Qadis, and according to the archaeological remains found it had a military post, a theatre, an amphitheatre, a couple of mosques, in the walled enclosure. The Vikings plundered and occupied the city in the mid-ninth century, achieving their expulsion.

The Reconquest in the south of the Peninsula was led by Ferdinand III in the 13th century, although it was actually his son Alfonso X who promoted the works in the city. Thanks to the trade with the south of Africa, which now would receive the name of Cadiz, it manages to recover. The first neighbourhoods outside the city began to be built at the end of the 15th century. The commercial port was extended to several Italian republics, among them Venice, bringing to the city the characteristic Carnival celebration.

The sixteenth century was the product of several attempts at siege, but without success managed to fortify the city. The attempts of occupation continued during the XVII century with the increase of the commercial bourgeoisie. Although without a doubt, the eighteenth century is the golden age of Cadiz after the discovery of America. Due to the weight and size of the large ships coming from the Indies, they caused the Casa de la Contratación to move to Cádiz, although with the expansion of up to 12 ports in 1778 it lost its monopoly on trade with America.

This wealth generated that in the 18th and 19th centuries the urbanistic reforms that form its layout today were undertaken, integrating the fundamental nucleus of the monuments.

The 19th century brought prosperity, but it was also accompanied by tortuous and violent episodes, caused by continuous change. In 1812 the first Spanish Constitution was approved, in the oratory of San Felipe Neri. Political instability predominated at this time, with the liberals making Cadiz their stronghold. The Revolution against the monarchy of Isabel II began in Cadiz as the pioneer of the uprising known as La Gloriosa in 1868. The First Republic was proclaimed, and it was Fermín Salvochea, the mayor of Cádiz, who proclaimed the Independent Canton of Cádiz which lasted from the 19th of July to the 4th of August 1873.

The 20th century led Cadiz to urban reform with the expansion of the port and the construction of hotels and spas to welcome the newborn national tourism. In 1977, after a period when the city had censored the carnival, it took it up again to be one of its most important dates in the calendar today.