Places to go out partying in Malaga

Seville, as we know it today, is the result of all the history that has passed through its streets and its inhabitants. But it is not by chance that “Seville has a special colour”. This thousand-year-old city has seen Tartessos, Visigoths, Romans, Muslims, Christians, and even Hercules himself pass through it!

In this article we want to tell you about the stage that one of the cities has gone through, which is currently one of the most important in Spain: Seville. There are different opinions as to who founded it. We explain it below.

Around 1000 BC the first Phoenicians arrived in Spain who were navigators. They came from Africa and went up and up until they reached the Strait. They were very afraid of the Atlantic Ocean; that great unknown. Only one sailor named Melkart took courage and crossed it. He climbed up the mouth of the Guadalquivir until he reached Seville.

There, Melkart called that territory Hispalis (which in Phoenician means “plain in front of a river”). He took over the monopoly of everything and defeated the king of the Turtedans, making them all change their religion as well.

The legend of Hercules was based on this true story: when Melkart died, the Egyptians and Phoenicians declared him a hero, a saint and even a god. Therefore, they changed his name, to the famous Latin Hercules. In the 12 works of Hercules, we find the one of “he cleaned the stables of King Geryon and tamed the fierce bulls”, which refers to this episode of the history of Seville.

The people of Seville have always recognised Hercules as their founder. Thus, we can see him in the form of a statue next to the city hall, or on the columns of the Alameda de Hercules next to Julius Caesar. 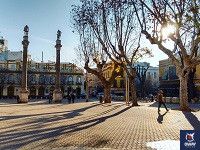 At that time, Seville was known by the Tartessos as Tarssis (the name they gave to the Guadalquivir). But the Romans arrived in 206 BC and Seville became Roman during the famous Punic Wars.

The Romans made Seville a great city. They knew how to exploit all the mercantile potential it had, and it became the most important city in the whole Betica with the arrival of Julius Caesar in Seville (43 B.C.)

Two great emperors were born in Seville: Trajan and Hadrian. Both led the Roman Empire in its maximum expansion. It is said that Trajan was the responsible that Rome became what it was: the most important city in the world.

And continuing with the mythology, historians say that it was Hercules who pointed out to Julius Caesar the location of this wonderful city.

The fall of the Roman Empire came to Seville with the invasion of the Visigoths after they drove out the Silinge vandals who occupied it. It was a rather dark time, as there were episodes of murders and betrayals from sons to fathers.

King Leovigild was murdered by his son Hermenegild. Later he besieged the city and diverted the Guadalquivir riverbed. But he didn’t stop there. The famous episode of the “dinner of the candles” also arises here: the most important people of Seville at that time took advantage of the darkness of that night to kill King Teudiselo.

Then, the capital of the kingdom passed from Seville to Toledo. But thanks to two great Sevillian characters, San Isidoro and San Leandro, Seville continued with its cultural importance. San Isidoro wrote “Las Etimologías”; an encyclopaedia that meant a great advance in the knowledge of the time. Both bishops can be seen in the coat of arms of Seville next to King Fernando III, which we will talk about later. 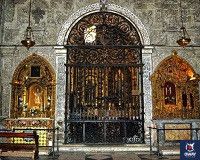 And in the year 712, the Muslims arrived in Seville to stay for five centuries. The Muslim prince Abd al-Aziz ibn Mussa, took Seville after a long siege. Then he was killed by his cousins. The Muslims called this city Isbilya. This was the capital of Al-Andalus (the name given to the Iberian Peninsula as a province of the Islamic Empire). Then, the seat was moved to Cordoba with the rank of Emirate and Seville would be the main city of a cora.

Seville was again a focus of cultural wealth. Later, the Almoravids and Almohads arrived, who were the architects of building the historic centre as we know it today.

This period is possibly the one that has remained most in the streets of Seville due to all the monuments that they built. It was here when were built the Torre del Oro, La Giralda, and even the old mosque that we know today as the Church of El Salvador. 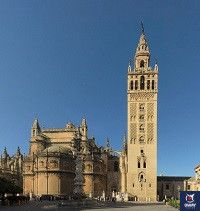 After several months of war, specifically 15, King Fernando III reconquered Seville in 1248. Fernando III the Saint made Seville the main seat where the court was housed.

The Christians threw out all the Muslims and Jews living there if they did not convert to Catholicism. All the mosques became temples of Christian worship, and the great mosque became the largest Gothic cathedral in the world, which is how we know it today. The Jews stayed in what is now the Santa Cruz district.

The Catholic Kings settled in Seville until the day they died. Then, the reign passed to their son Alfonso X the Wise. It was King Alfonso X who created the current shield of Seville with his famous motto “NO-MADEJA-DO” (“HE HAS NOT LEFT ME”), which alludes to the loyalty that the city gave to King Alfonso X in the confrontation he had with his son Sancho IV and is the city’s motto.

It was also at this time that Christopher Columbus made Seville the most important city in Europe and the world. He negotiated here with the Kings of Castile the way out to the new world. And when he returned to Seville, all the gold and new products were sold here. The great merchants and people from all social classes came to Seville at this time.

In this historical period the famous buildings were made:  the Archivo de Indias, Reales Alcázares, the City Hall, the Audiencia and the Mint were born. The University was also created and the first printing press in the kingdom of Castile was installed in Seville. 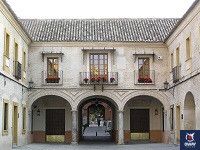 But the entire boom that Seville experienced with the arrival of Columbus was affected with the transfer of the Casa de la Contratación to Cadiz, being this the city that hosted this time all the trade with the Americas. In addition, in 1647 the Black Death arrived in Spain. Seville saw its population shrink by half and this caused great economic and, of course, social damage.

With the arrival of the Counter-Reformation, 73 convents of all orders, both male and female, were built. Moreover, it was also during this period that the first brotherhoods of passion were founded, which today parade through the streets of Seville in their famous and beloved Holy Week. The painters Valdés Leal, Murillo and Zurbarán, and the sculptors Martínez Montañés and Juan de Mesa also emerged.

Throughout the 19th century, Seville experienced great events that have marked the history of Spain, such as the War of Independence, the Narvaez y Cordova revolution, the uprising against General Espartero, O’Donnelll’s coup d’état, etc. But another of the great events that emerged in Seville was the arrival of the railway.

And at the beginning of the 20th century, specifically in 1929, the Ibero-American Exhibition was organised, whose event significantly reformed the aesthetics of the city. The spectacular Plaza de España, now considered one of the most beautiful in the world, and the María Luisa Park were built for this event. The airport was also built and the river was channelled.

In the 1960s the city was greatly modernized and little by little its neighbourhoods expanded and grew exponentially, after the great flood of 1961, when the river flooded and caused much damage to the city.

And in 1992, Seville became big again. It was the city that hosted the 1992 Expo and the City Council put all its effort and dedication into adapting the city to that event. It took place on the Isla de la Cartuja, but the whole of Seville was prepared to be a good host. A lot of infrastructures were built, such as several more modern bridges, many pavilions from different countries that are still used today, an improvement in public transport… and the AVE high speed train that linked Seville with the capital of Spain: Madrid.

Once the Autonomous Communities were created, in 1995, Seville was chosen as the capital of Andalusia.

As you may have noticed, Seville has been the scene of great historical moments that have marked the history of Spain and the world. For this reason, in the Plaza Puerta de Jerez, which would have been one of the old gates leading into the city walls of Seville, we can see the following poem written

A poem, with 5 verses, describes the history of the most beautiful city in the world: Seville.