Holy Week in the city of Córdoba | Owaytours.com

What to do for free in Cadiz 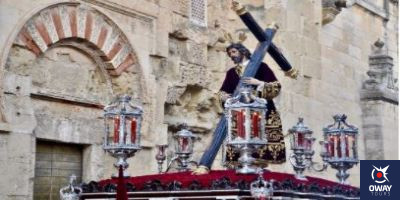 If there is a week in the year and a place in the world where music, fervor, belief, feeling, smell, colour, etc. coincide at the same time… This is the Holy Week in Andalusia. Cordoba, one of its most important cities, has a week of Passion with centuries of history. There are hundreds of people who do not want to miss the processions that take place over seven days in the most emblematic places of the Caliphate city. If you are looking to live a unique experience from the inside of your own, Cordoba is the best place to spend this week.

History of Easter in Cordoba

There is evidence of the celebration of the Passion of Jesus Christ in the Middle Ages, but it was in the 16th and 17th centuries that the brotherhoods, as we know them today, began to be created. In Cordoba, the first brotherhoods were those of Las Angustias and Los Dolores.

Although Holy Week continued over time in the rest of Andalusia without problems, a bishop in Cordoba cancelled them at the beginning of the 19th century, limiting them to a large procession on Holy Friday. This was so until the beginning of the 20th century when brotherhoods re-emerged recreating those that existed in antiquity. They were characterised by their austerity in the face of the splendour of Seville and Malaga. When the number of brotherhoods grew, it began to acquire spectacularity and the popular interest it has today among the people of Cordoba, thus becoming the most important popular festival in the city.

At present, there are 37 brotherhoods spread throughout all the city’s neighbourhoods. Throughout the year, these associations carry out social actions in their neighbourhoods such as food collection, Operation Kilo, etc. The high point comes on the day they carry out the Penitence Station to the Santa Iglesia Catedral (between Palm Sunday and Easter Sunday) with their devotional images and large processions that go through the streets of their neighbourhoods of origin until they reach the historical centre of the city where they coincide in the same route, called Carrera Oficial (Official Street), which all the Brotherhoods go through one after the other. We recommend that you go to the surroundings of the Mosque-Cathedral as this is where the Carrera Oficial is located and you will be able to see the Brotherhoods passing by in a very comfortable way and in a privileged place.

If we had to choose the most popular, these would be:

From Palm Sunday, the brotherhood of El Rescatado, as Jesús Rescatado is one of the most devotional images of the city, he is popularly called “the Lord of Cordoba”. 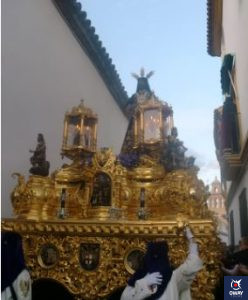 On Holy Monday, the brotherhood of the Remedio de Ánimas due to its recollection and the silence that surrounds the procession. During the passage of the brotherhood, the lights of all the lanterns are turned off giving theatricality to this unique moment. 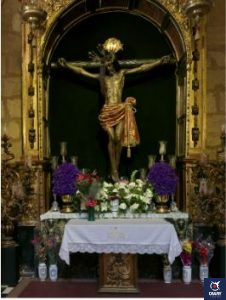 On Holy Tuesday, the brotherhood of El Prendimiento, one of the youngest brotherhoods in the city. It is located next to the Salesian School and has a large number of children in its ranks. 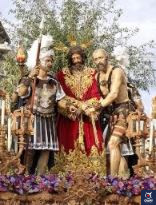 From Holy Wednesday, the Brotherhood of La Paz, due to the majesty of its processional floats and for being the brotherhood with the largest number of Nazarenes in the city. 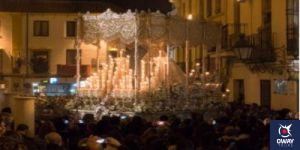 From Holy Thursday, the Brotherhood of Las Angustias, known as “La Decana” because it is one of the oldest in the city and the first to carry out the Penitence Station in the Cathedral. 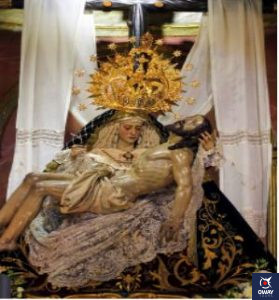 On Holy Friday, the Brotherhood of Los Dolores for its procession to what is, without a doubt, the image that arouses most devotion among the people of Cordoba. A large number of ferigrese people will accompany the procession. 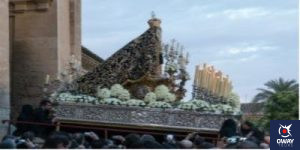 And finally on Easter, as could not be otherwise, the Brotherhood of El Resucitado, from the Santa Marina district, one of the most traditional and beautiful neighborhoods in Cordoba. It contains an infinity of patios, which in the month of may look their best, do not hesitate to visit it together with Oway Tours in Guided Visit Patios de Cordoba.

One of the things that most attracts the attention of tourists is the large number of people who form these processions and the role of each one in the procession. The most important elements we can find are: the Nazarenes, the costaleros (chargers) and the musicians.

The Nazarenes are the people who accompany the devotional image in front of the pass with candles or other items such as flags, sceptres, etc. Their function is to illuminate the path of the procession. They wear long and striking tunics of the same colour (this varies according to the brotherhood). Some processional parades in the city have up to 500 Nazarenes among their ranks, and on many occasions, especially in those Brotherhoods that are located near schools, a large percentage of Nazarenes are young boys and girls. 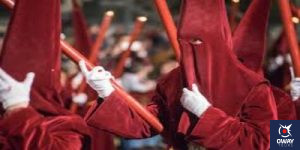 The costaleros and costaleras are the people who are in charge of carrying the processional step with the image of Jesus or Mary around their necks. The average number of people carrying the weight is about 45 and each one carries about 50 kilos. If you go to the exits of the brotherhoods you will see how they prepare. The reflect in their faces the emotion for the fervor and the time they have been waiting for that day to arrive. 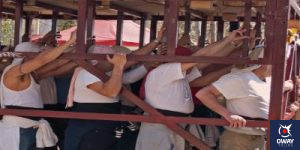 Although not all the brotherhoods have musical accompaniment, it plays a fundamental role in Cordoba’s Holy Week. Throughout the year the bands rehearse waiting for that week of March or April they are so keen on. It is truly exciting the combination that the costaleros recreate to the rhythm of the Holy Week marches. Processional music has become so popular that records are even produced for physical sale. 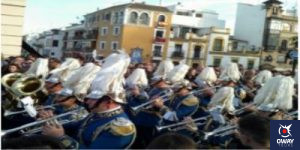 The best corners of Cordoba’s Easter

One of the aspects that make Holy Week unique in this city are the incredible corners through which the different brotherhoods pass. Below, and by way of recommendation, we will leave some of them. All these can be visited the rest of the year woth Oway Tours, Free Tours in Cordoba is the best opportunity to enter the heart of the city.

On Palm Sunday, Holy Monday and Holy Friday, three brotherhoods cross the Roman Bridge to reach the other side of the city. This is a unique moment awaited by many Cordovan people. The processional marches will sound one after the other in an endless number of tunes. I f you think that this is the only magical place in the Caliphate city, you cannot miss the Acazar or medina Azahara, for this we have the Guided tour of the Alcazar of the Christian kings and the Guided Tour Medina Azahara. 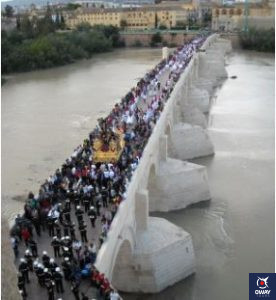 An obligatory appointment on Good Friday afternoon when one of the oldest brotherhoods in Cordoba, the Brotherhood of Los Dolores, goes out. This image of the Virgin Mary is known as the “Lady of Cordoba”. Due to the love and devotion that the people of Cordoba have for her. The clouds of incense and the silence are the protagonists at the moment of the departure of the brotherhood, a silence that is interrupted by the moan of a woman singing a saeta, a typical song of this celebration, from one of the balconies of the square. 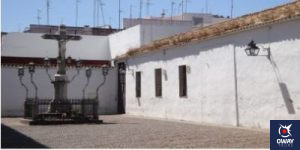 Key point of the Holy Week and the place chosen by many tourists to contemplate the passage of the brotherhoods for their comfort due to the installation of boxes and chairs with a price ranging between 60 and 72 euros. In the Carrera Oficial you get rid of having to walk from one side of the city to the other in search of the brotherhoods that procession through different neighborhoods until you reach this point. You will also enjoy the contrast between the architecture of the Muslim period and the baroque of the golden pass that create a panorama that you will never forget. To visit this magical place, do not hesitate to do it with our tours, Guided Tours to the Mosque-Cathedral of Cordoba and Guided Tour of Monuments in Cordoba, the latter also includes the most outstanding monuments of the city. 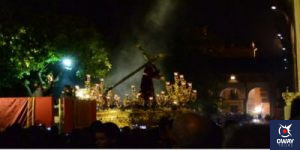