The 7 curiosities you didn't know about Medina Azahara - Oway Tours

The 7 curiosities you didn’t know about Medina Azahara 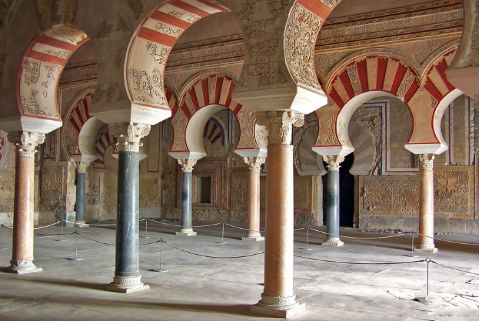 Due to the interest that the palatine city of Medina Azahara has awakened after becoming in July 2018 a UNESCO World Heritage Site (the fourth World Heritage Site in the city of Córdoba), we believe it is convenient to make a brief presentation concerning 7 curiosities related to the beautiful " Shining City":

1- The top of the Iceberg

At the moment only a 10% of the total surface area of the Caliphate City has been excavated and, since its nomination as an UNESCO World Heritage Site, the flow of visitors has increased by an incredible 40%. So, due to the effort of the researchers and the interest of our visitors, we hope that the archaeological work will bring us many surprises in the years to come. One of them, released in November of 2017, is related to the the Eastern Portico had its counterpart at the opposite end of the great Plaza de Armas.

Another great surprise has been the discovery of a building, whose purpose remains unknown for the moment (located next to this new portico in the Plaza de Armas) with strong Abbiside influence, as it has a plant in T shape. It dates from the first stage of construction of the city, around 940 b.C.

3-The " Shining City " in the darkness

Did you know that it is possible to enjoy nocturnal visits to Medina Azahara? Between the months of April and October, you have the chance to enjoy the mysterious atmosphere of the " Shining City " at night, being this a truly unforgettable experience.

4- The only caliphal city susceptible of being investigated

Alberto Montejo, the current director of this archaeological site, pointed out that Medina Azahara: "is the only Caliphate city preserved and subject of investigation. The other two, Cairo and Baghdad, have a population of 15 and 20 million inhabitants, which makes them irrecoverable". This was one of the main reasons why it was declared a World Heritage Site.
Medina Azahara Guided tour 18€ Book

5- The reopening of the Rich Hall

During the last month of December and until January 5 2019, the Rich Hall has been temporarily reopened, closed for 9 years due to an eternal process of restoration of the arabesques which decorate its walls, façade and counterfacade. Throughout 2019 it is expected to sign the agreement for the tender of works for the second phase of the restoration works of this hall with the objective of allowing the visitors to enjoy one of the great jewels that Abd al-Rahman III left in inheritance for us.

6- Details that make the difference

The arabesque that appears infinite times on the walls of the Rich Hall represents the Tree of Life, but actually none of these representations is repeated: each Tree of Life has some detail that makes it unique and different from the rest.

7- If Abd al-Rahman would raise his head

It was not until the beginning of the 20th century that the legitimate authorship of the city was discovered, thanks to research work. Until then, it was thought that the ruins of Medina Azahara belonged to a Roman settlement. On the other hand, the current entrance to Medina Azahara is located right at the opposite end of the original entrance which would be very close to the current Museum building. This is due to the improvements that are intended to be made in the future to facilitate the flow of visitors in order to make the itinerary of the tours same as the original thousand years ago.

From Oway Tours we hope that you have enjoyed this article and, if you have not already done so, encourage you to visit the incredible city of Medina Azahara, and thus be able to be delighted in person with the mysteries and creations that the last independent emir of the Caliphate of Cordoba prepared for us.