Museums and monuments in Malaga 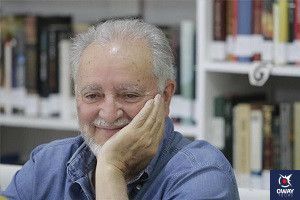 Cordoba has always been a land of artists who have seen many of them born. For a long time now, dozens of illustrious Cordovan artists have been trained in their respective categories in this Andalusian city, and today they are recognised and loved in their homeland. In this article we tell you which some of them are:

He was born in Córdoba on February 2, 1978. Macarena is known for starring in series such as La que se avecina, or films such as Sexykiller, morirás por ella. In addition to working for television, she combines that work with theatre, where she plays Orquesta Club Virginia. She has received several awards, although the most important one has been the Goya nomination in 2014 for best female performance starring Musarañas.

Josefina was born in Córdoba on November 14, 1936. She is a film director, screenwriter, television producer, novelist and Spanish stage director. This illustrious Cordovan has been the pioneer of cinema with works such as “Función de noche” or the famous series of Teresa de Jesús. She has won many awards throughout her career, perhaps the most important being the Goya of Honor in 2012. Josefina has always been known for her great feminist work in Spanish cinema. 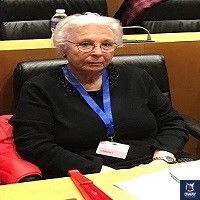 Born in Córdoba on February 24, 1967, like Macarena García, he achieved his fame with the series La que se avecina o Aquí no hay quien viva. Fernando has dedicated his entire life to film and television, a fact that shows his great film record with works such as La chispa de la vida, El club de los suicidas… With the film Días de fútbol he received the Goya for best newcomer actor in 2003.

He was born in Córdoba on August 8, 1995 and died in Madrid on January 4, 1995. Rafael studied painting until 1916 with Julio Romero de Torres in Cordoba, and at the age of 17 he moved to Madrid to begin his studies at the Conservatory of Music. In 1919 he entered the Madrid Philharmonic Orchestra as a viola teacher through a competitive examination, and in 1930 he became a member of the Spanish National Orchestra. There are works of his in The Museum of Fine Arts of Seville, Cordoba, Bilbao, in the Museum of Jaen, in the Reina Sofia, etc.

Juan de Mesa was born in Cordoba in 1583 and died in Seville on November 26, 1627. He moved to Seville at a very young age to study with the sculptor Martínez Montañés. There he left almost all the legacy we know today, which has shaped practically all of Seville’s Baroque. Describing all the works that Juan de Mesa has left us is a practically impossible task, although among his most famous carvings we can highlight the Jesus of the Great Power, also called the Lord of Seville or the Christ of Love. 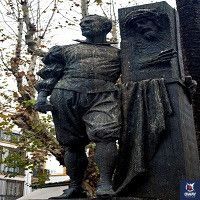 He was born on November 9 in Córdoba and died there on May 10, 1930. He is considered one of the heirs of the best Spanish tradition. At the beginning he tried to reflect in his works the most rural Andalusia of the time. Romero de Torres stands out for his precise drawing in balanced compositions of bluish, greenish and, above all, black colours. His works Naranjas y limones, Amor místico y amor profano, Poema de Córdoba, Marta y María, and La saeta stand out among others. In Cordoba there is a museum dedicated to him. 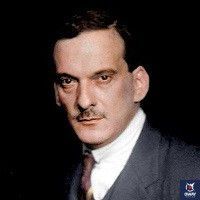 Julio Anguita was born on November 21, 1941 in Fuengirola, and died recently in Córdoba on May 16 of this year. He was not born in Córdoba, but he developed his entire political career in the capital of the province of Córdoba. He was the mayor of this city in 1979 until 1986 and was known as “the red caliph“. He was also general secretary of the Communist Party of Spain (PCE) and general coordinator of the Izquierda Unida (IU). With the IU he reached 2 million votes in the 1993 general elections and distinguished himself by his demand for programmatic agreements and his rejection of corruption

He was born in Córdoba on April 3, 1910 and died in his hometown on December 5, 2003. Jose Antonio was the mayor of the Andalusian city where he lived all his life from 1951 to 1962, and he also became the president of the Provincial Council of Cordoba. He joined the Falange Española in 1933 to occupy the post of complementary lieutenant in the Civil War. During his years of mandate as both deputy and mayor, Jose Antonio reformed Cordoba by recovering the walls, the Alcazar, built the airport and was the architect of the creation of the National Competition of Cante Jondo and the Festival of the Patios of Cordoba.

Born on March 16, 1959, she is one of the most famous dancers of Cordoba. She is a professor of Spanish Dance at the Conservatory of Dramatic Art and Dance of Cordoba. She has received numerous awards throughout her artistic career, including the Encarnación López National Flamenco Dance Award, the Cabales de Plata Award for the most complete dancer, and the Fiambrera de Plata Award from the Cordoba Athenaeum.

Joaquín was born in Córdoba on February 22, 1969 and is a dancer, choreographer, director and producer. He is considered one of the most international gypsies in the world, as at the age of 19 he decided to leave the Spanish National Ballet, where he was admitted at the age of 14, to go to the Géants de danse gala at the Champs Elysées Theatre in Paris. At this time he created the choreography of the opera Carmen for the Arena of Verona, Italy. He also participated in the Tokyo Summer Flamenco Festival, Japan or the Lincoln Center galas in New York, USA. 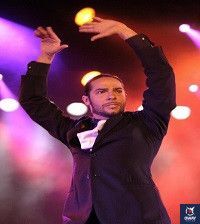 Manuel Laurenao Rodrígez, known as Manolete, was born in Córdoba on July 4, 1917 and died in Linares on August 19, 1947. He became a myth in post-war Spain after dying from a goring in the Linares bullring. He is considered to be one of the masters of bullfighting of all times. He had an elegant style that revolutionized the art of the muleta when bullfighting from the front. His influence has been enormous, as his style was noticed in all subsequent bullfighters. 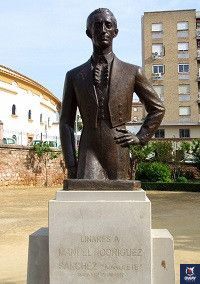 Born on October 13, 1985 in Cordoba, she received her first contact with flamenco at the age of 5 in Nieves Camacho’s classes. Since then and until now, India has dedicated herself body and soul to music. In 2009 she was nominated for the Latin Grammy awards in the category of new best artist, and has received, among many other awards, the Goya for best song for El niño. To date, she has a total of 8 albums on the market, 4 of which are platinum and one gold.

Dolores Castro Ruiz, known as Dora la Cordobesita, was born in Cordoba on May 22, 1902 and died in Seville on October 31, 1967. She was a cupletist and emblem of the beauty of the Cordovan woman who came to pose on several occasions for Julio Romero de Torres. She performed as a tonadillera in the well-known show “Lo mejor de Cordoba” among other productions.

This classical philosopher, doctor, astronomer, judge and writer was born in Cordoba on April 14, 1126 and died on December 17, 1198. In the West, Averroes was known for his extensive commentaries on Aristotle. His thoughts generated controversy in Latin Christianity and triggered a philosophical movement called Averroism based on his writings. In addition to his philosophical studies, he also devoted much of his life to astronomy and wrote three important theological studies in addition to the Book of Generalities of Medicine.

Lucius Anneo Seneca was born in Cordoba in 4 B.C. and died in Rome in 65 A.D. He was a Roman philosopher, politician, orator and writer. He stood out because of his intellectuality and is considered a predominant figure in politics during the reigns of Claudius and Nero. But he went down in history as one of the leading representatives of Stoicism.  His work constitutes the main written source of Stoic philosophy that has been preserved until today. The remaining works of Seneca can be divided into four sections: the moral dialogues, the letters, the tragedies and the epigrams.