Summer in Cadiz: Enjoy the heat and sun 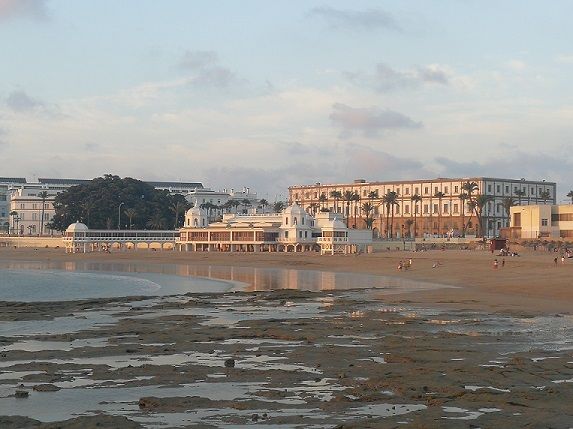 Regularly awarded with a blue flag for its cleanliness and excellent facilities, la Caleta beach is the most beautiful urban beach in the city of Cadiz, the capital of a province of wonderful beaches in general.

Located between two old castles, Castillo de Santa Catalina and Castillo de San Sebastián, this beach is always busy during the day but specially just before the dusk hours due to the spectaculary of its sunsets.

But the most eye-catching building on La Caleta beach is, undoubtedly, the spa Balneario de Nuestra Señora de La Palma y del Real. Nowadays it is considered to be one of the most iconic buildings constructed in Cadiz during the first decades of the twentieth century.

After years of abandonment, there were plans to restore the building for public use, but at present it’s used exclusively for administrative purposes. It is the headquarters of the Subaquatic Archaeology Centre of the Andalusian Historical Heritage Institute.

Indeed, more historic remains have been found in the surroundings of La Caleta beach than anywhere else in the whole of Cadiz city. Today, many of these finds are on display in the Museum of Cadiz.

La Caleta beach has played an important role in history as the channel which used to link the two original islands that came to form present-day Cádiz started here. It has also been used to moor boats since at least Phoenician times.

The cove that nestles this beautiful beach is also known for the rich archaeological remains that its waters hide, since it was the place where ships anchored in ancient times. The Phoenician ships arrived here in Gadir with their cellars full of all kinds of merchandise and from here they also started with raw materials and products made in the colony.

But the main attaction of La Caleta beach, a 450-metre stretch of golden sands and clear waters, remains its idiyllic location, a scene that has inspired many musicians and poets along the times. Close to the popular and picturesque La Viña neighbourhood, La Caleta offers a real sense of the character of Cadiz.

As soon as the good weather begins, La Viña neighbours come here every to spend the day swimming, sunbathing, playing and eating. It would be impossible to understandl La Viña neighbourhood without appreciating the close links that it has with La Caleta beach.

A walk through La Caleta beach deserves to be completed with a visit to one of the most appreciated and iconic restaurants in Cádiz: El Faro. Located a few meters away, this renowned restaurant is perfect for tasting the most authentic and delicious gastronomy of Cadiz. Fresh and of quality products granted.

The beauty of this beach has not been unnoticed by film producers and directors, who have portrayed it in several films such as ‘ Alatriste’, ‘Manolete’ and 007 James Bond ‘Die another day’. You will probably remember the scene of the beautiful actress Halle Berry coming out of the water with the famous orange bikini, and Pierce Brosnan as Agent 007 looking at her while drinking a Mojito. Well, that paradisiac spot which was supposed to be La Habana, was indeed La Caleta beach of Cádiz.