Almocábar Gate in Ronda: Welcome to a legendary place

Advantages of Segway: a new way of doing tourism 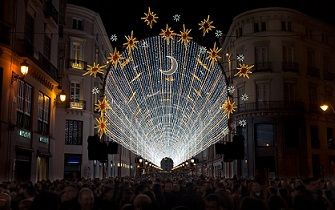 If you’re planning on visiting the Costa del Sol this Christmas, you cannot miss a visit to Málaga city center to see the amazing Malaga Christmas Lights display and show in the city’s famous Larios street.

Over recent years, Málaga Christmas lights have quickly become one of the most famous in the whole country. The Town Hall spends hundreds of thousands of euros on Christmas lights every year to make sure they live up to expectations.

The spirit of Christmas fills every corner of the streets of Malaga. The atmosphere accompanies the evening strolls and shopping in the historic district, as well as the Christmas market set up in Paseo del Parque. The spectacular Nativity scenes devotedly erected by associations and groups of all kinds throughout the city.

Switching on the lights: the beginning of Christmas

The festive season in the capital of the Costa del Sol starts officially when the Christmas lights are switched on, just as the lighting of the Rockefeller Centre tree marks the start of Christmas in New York City.

Every year, hundreds of people gather in Larios Street to witness the turning on of the lights, marking the start of the Christmas season, a period in which local residents and visitors live with great passion. This big event always happens on the last weekend of November, so this year will be on the 29th of November.

Also, the main Alameda avenue is decorated with thousands of white lights that run through the city’s most famous trees, lining the way to the famous Marques de Larios roundabout.

The spectacular display is well-known throughout the rest of Spain. In fact, different national surveys have accredited Málaga as the best Spanish destination to visit at Christmas. Only the city of Vigo up North comes close.

A stroll around the capital will really amaze visitors, especially Málaga’s most emblematic street, Calle Larios, in the center of the city’s Old Quarter. The Christmas lights are renewed every year. In 2018, thousands of stars landed in the capital of the Costa del Sol in the shape of a vault, truly spectacular!

There are normally three light shows accompanied by music every evening until the 6th of January. The first is at 6:30 pm, the second at 8:00 pm and the third at 9:30 pm. During these shows, visitors will be able to watch the special led lights ‘dance’ to the sounds of different tracks. Each show lasts between 2 and 3 minutes and they are sure to be the high point of anyone who is visiting Málaga City Centre over the Christmas period.

2019 Christmas lights: what we know

Cordoba-based decorative lighting company, Illuminations Ximenez, is in charge of the city’s Christmas lights this year once again. The City Council has said Larios Street in the center will remain the focal point of the seasonal light display, despite the town hall having sold the street’s famous light tunnel to Liverpool. We are sure though that the new lights won’t disappoint though!

A giant Christmas tree will also return to Plaza de la Constitución in Malaga center. The council said they are sticking to the traditional mix of music and lights in order to attract as many tourists as possible this year.

If you want to be present at the switching of Malaga Christmas lights this year, which, as we said, will happen on the 29th of November, don’t forget to arrive with plenty of time in advance as it surely gets crowded! The event will start at 17:00. Also, opt for public transport instead of the car, as parking in the surroundings will be a challenge.

And that’s it, get ready to enjoy this truly magical moment!