Most famous streets in Granada 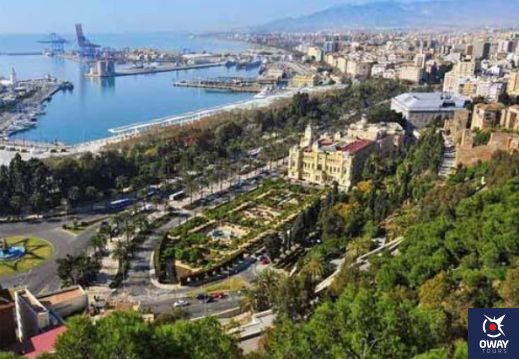 Malaga is a city full of history, tradition, museums, and beautiful monuments. Without a doubt, it is increasingly a destination chosen by visitors, thanks to the enormous cultural, tourist, gastronomic and leisure enrichment that Malaga can bring to tourists. However, the streets of Malaga are another of the great reasons to delight all those who come to spend time in the city. If you stay to read this article, you will not regret getting to know the most famous streets of Malaga.

The Marqués de Larios Street is the 5th avenue in Malaga. Here you can find all the most prestigious and important fashion shops. It is the main avenue and the nerve centre of the city, as well as its most important and famous shopping street.

It is one of the most elegant 19th century streets in Spain, as well as one of the most desirable shopping streets in Europe. It is named after the 2nd Marquis of Larios: Manuel Domingo Larios y Larios, who presides over the beginning of the street within a sculpture complex at the intersection with the Alameda Principal.

The Marquis of Larios ordered the engineer José María de Sancha to carry out the first widening that would be the origin to this street. Modified later on, the street was finally inaugurated on August 27, 1891. Curiously, no member of the Larios family attended, since some workers surrounded their private home during the La Gloriosa revolution in 1868, which forced them to escape through the roof and finally go into exile to London and Paris. 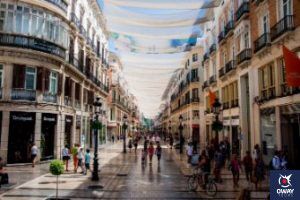 There are emblematic moments in the year when the Calle Larios becomes the main enclave of the festivities. During the August Fair, it is the backbone of the Malaga Day Fair. At the Holy Week, it is the main axis of the Official Route, since all the brotherhoods and sisterhoods pass through this street and, in addition, at the end of it, the Official Tribune is located. During the Malaga Film Festival, the whole street is carpeted and shows exhibitions related to cinema. And we cannot forget the Christmas lighting, which has made this Malaga street so famous. 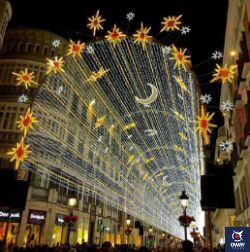 This street, also called The Pasaje de Álvarez, is named after the former civil and military governor of Malaga. This was Antonio María Álvarez, who was also a businessman. He ordered the construction of the Agustinas Convent on the land, which had been disentailed.

The central space stands out as a courtyard and the two axes that converge in it, forming a very singular set where the visual load is distributed both towards the side streets and the square, thanks to the beautiful access arch.

El Pasaje de Chinitas has received a lot of commercial activity since its opening. It was home to the historic Café-Theatre of Chinitas, which remained open from 1857 to 1937, of great international prestige and even named in a poem by García Lorca dedicated to the bullfighter Paquiro. In the theatre of the Café de Chinitas, great personalities of the Spanish music scene acted and sang. La Parrala, Juan Breva or la Niña de los Peines are some of the famous personalities who passed through there. 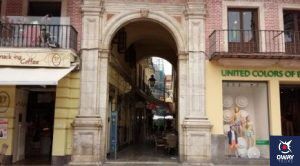 Full of bars and terraces, in the central part of the street we find the back façade of the Picasso Museum of Malaga, with a tree-lined garden that is situated next to the Jewish Quarter of Malaga, and a small square. In this area we can also access to the traditional Tavern of El Pimpi, very well known in Malaga and abroad, as it specializes in sweet wine and both tourists and inhabitants enjoy the traditional aspect and the great welcome that is received in this tavern.

The name it receives is because it is close to the slope on which we find the Alcazaba of Malaga. Furthermore, in this street we can also find the building of the Albéniz cinema, which was built in 1945. This portrays a peculiar architectural style that mixes historicism with the Californian style of the cinemas in the United States. Next to the cinema, we can find the Roman Theatre of Malaga, which was discovered in 1951 and excavated between 1994 and 2010, after the demolition of the Casa de la Cultura. At the other end of Alcazabilla street we find the Plaza de la Aduana, which owes its name to the Palacio de la Aduana, home to the current Museum of Malaga. 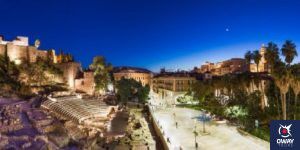 This is one of the most important avenues in Malaga that is located right in the centre of the city and that, until the inauguration of the current Calle Larios, was the nerve centre of Malaga’s social life.

In the Alameda Principal we can find several buildings of great importance, such as the Municipal Archive from the 18th century, the institutional headquarters of Cajamar located in a neo-baroque building from 1914, the headquarters of the Government of Andalusia from the 18th century, the building of La Equitativa from 1956, or the Taillefer building from 1955.


In addition, the Alameda also plays a fundamental role in Malaga’s Holy Week, as it is the point of departure and arrival of all the floats that belong to each brotherhood and sisterhood. Therefore, it is the main point of convergence of the Official Route. It continues to preserve its traditional and historic trading posts, with the flower stalls, the roasted chestnut stalls and the newsstands standing out above all. Finally, the Alameda Principal is the place where all the EMT urban bus lines converge, as they either have their head office here, or they have one or several stops along it. 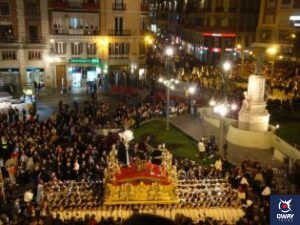 History of the Alameda

Originally, the old defensive walls of the medieval period were located in the Alameda until the end of the 18th century. Since then, with the arrival of the new way of seeing bourgeois life, widening and tree-lined walks began to take place all over Europe. At this time, noble houses and mansions began to be built for the Malaga merchant class, and it became the most privileged area of Malaga in the 19th century.

At the end of the 19th century the characteristic and current Ficus trees of the Alameda were planted. Moreover, the monumental complex to the Marquis of Larios was installed, opening to traffic in 1925. Previously it had been populated by white poplars – hence its name Alameda -, sculptures and the Genoa fountain or Carlos V fountain,. The later is currently located in the Plaza de la Constitución. In addition, the Alameda witnessed the first public lighting with oil or gas lamps, and the wealthy bourgeoisie of Malaga built their palaces there.

If you would like a change of scenery in addition to strolling about the most emblematic streets of Malaga together with the best local guides in Malaga, make sure to join us on our guided visits to El Caminito del Rey to enjoy the nature of the city. This trip along with our Free Walking Tour in Malaga at your total disposal, you will make the most out of your stay in the marvelous city of Malaga.