➤How to get around Cadiz | OwayTours.com

5 reasons to visit Cordoba in Autumn 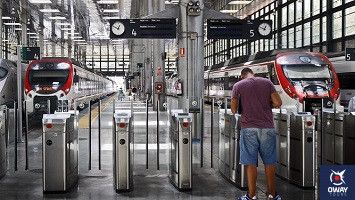 “The little silver cup”, how Cádiz is known, is a very small city and its historical center can be walked through from one end to the other. However, if you are staying in a hotel outside the walled city or you just don’t want to walk that much, there are many ways to get around in Cadiz by public transport. Plan your itinerary, note down the places you are interested in visiting and read this article carefully to find out how to get around in Cadiz by public transport.

*The prices and fares stated correspond to 2020

The city bus is a fast, cheap and effective way to get around Cadiz, which you can also combine with walking. If you are staying outside the historic centre, for example, you can take a bus into the centre and walk from there – there are many combinations!

There are different lines that run through the city so we encourage you to look at the official Cadiz urban transport website to see the different routes and to see which line is the most convenient for you. However, normally, the most useful city lines for tourists are number 1 and number 7.

The train from Cádiz works inside and outside the city, but if you want to get around the city, the bus may be a more flexible and economical option. However, if you want to travel around the province to nearby beaches, towns or cities, the short-distance-train is the best option to do so.

The price of a single local ticket starts at 2.9 euros and from there, it varies according to the route you take.

Short-distance-trains run from 6:15 a.m. to 10:15 p.m. You can check train frequency on the official Renfe website: https://www.renfe.com/viajeros/cercanias/cadiz/index.html

Moving around Cadiz by taxi can be a very comfortable and flexible option that can save you from any situation.

Taxi fares are explained on posters placed inside the car and visible to the user. The prices are specified for minimum fare, lowering of flag, mileage and surcharges, such as night service, festive service, station or airport departure.

As it is such an important and touristic city, taxis work at any time of the day every day of the week. They can be stopped on the street when they have the green light and also at stops, which are usually located at busy points such as stations, central squares and the airport. There are also teletaxi services, through which the customer can request the vehicle by phone to pick him/her up wherever he/she wants. However, remember that if you are in another town in the province and you want to return to Cádiz, you will have to call the teletaxi number of that town and not the urban Cádiz teletaxi number.

The journey will be from and to wherever you want, especially if you call the teletaxi service, in which case they will come and pick you up where you are and drop you off wherever you want.

With the new remodelling of the city, Cadiz has perpendicular bicycle lanes that cross the city and on the promenade. Think about it: taking a bike ride along the promenade while enjoying the sunset sounds great, doesn’t it? Plus, it’s the most environmentally friendly option and you’ll be doing sport while visiting the city. Have we convinced you? Keep reading!

There are several companies that rent bikes for a couple of hours or a day, or even for organized bike tours. One of the best known is “Las Bicis Naranjas”, which has different prices depending on how long you use the bike. For example, to use a bike for one hour the price is 4 euros and if you want it for three hours, then the price is 9 euros. In addition, they have prices to have the bikes for half a day (10 euros), one day (15 euros) and two days (25 euros).

There are other companies such as Urban Bike Cádiz, with slightly cheaper prices (7 euros/3h), or even with a discount if you rent several of them, so look for the option that suits you best and, go around Cádiz pedalling!

The journey is free, follow your itinerary to visit Cadiz, go to the beach or get lost, you lead the way!