The Best Churches in Cadiz 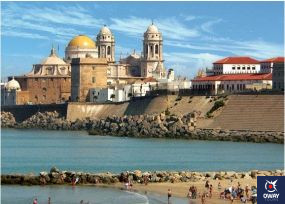 Cadiz is one of the oldest cities in Europe and therefore has a great historical and monumental history. Besides being a clear tourist destination due to the beauty of its streets, the splendour of its beaches and its good weather and wonderful gastronomy. The city of Cadiz also offers us incredible religious architectural masterpieces that we bring you today in this article. If you want to know more about the best churches in the city of Cadiz, read on.

Cathedral of the Holy Cross of Cadiz

This is the episcopal see of the diocese of Ceuta and Cadiz. Built in baroque and neoclassical style, was initiated in 1722 and was not completed until 1838. The successive economic crises that occurred during this stage led to the cathedral host different styles. Due to the French invasions and colonial losses in America.

It is also known as the “Santa Cruz sobre el Mar” or the “Santa Cruz sobre las Aguas”, although in Cadiz it is popularly known by its inhabitants as the New Cathedral. As opposed to the current parish church, built in the 16th century on top of an old Gothic cathedral that was built under the rule of Alfonso X The Wise.

It is in the heart of the historic centre of Cadiz, by the sea, and its large dimensions make it visible from any point in the city. At the same time, it houses the entrance to a cathedral museum which is in the Plaza Fray Felix, next to the Old Cathedral. We can find pieces of great interest in this museum, both on display and in its storage area. The best way to get to know the history and learn is with our tourist guides with whom you will get to know Cadiz.

Inside we can find the chapel of the Genoese, built by a Genoese colony that lived in Cadiz, as a place of worship and where social activities were developed. It was made of marble and finished in 1671. It features a figure of the Virgen del Rosario de los Milagros and a crucified Christ on it. In other words, is accompanied by the Virgin Mary and St. John, with the figure of God in the attic. 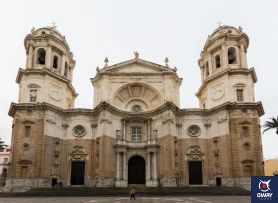 Located in the old part of the city, in its homonymous square, we find the Convent of San Francisco. It was founded in 1566 and rebuilt in the 17th century. When it underwent a major reform that gave the church its current baroque appearance. The plasterwork and vaults were reformed, along with some construction elements that had become obsolete.

After the disentailment, the convent rooms were extremely reduced, and today the rectangular cloister, in the Mannerist style, and the church are preserved. Today it houses the Museum of Cadiz, and its orchard was in the current Plaza de Mina, in the Plaza de San Francisco itself. The convent was very important in its time, mainly because it was the main place where the friars were formed who were later sent to America, as was the case with the famous Friar Junípero Serra. 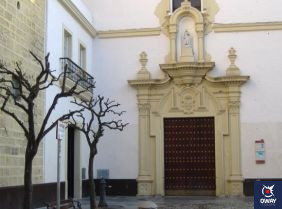 This church was built in 1635 in the Mannerist style. It is in the Plaza de la Catedral, and for a long time was the headquarters of a school of the Society of Jesus in Cadiz, of which only this temple is preserved today.

On the site there was originally a medieval chapel where the Society of Jesus had established itself in 1564. After the assault by Anglo-Dutch troops led by the Earl of Essex in 1596, the school was left in a sorry state. So the temple had to be rebuilt, following the Mannerist style of Vignola for the Church of the Gesù in Rome, which was the model for countless Jesuit churches throughout the world, especially in America.

The church has two exterior doorways, made of marble that follow the Mannerist pattern. One is on the façade of the Cathedral Square, brought from Genoa, and the other is on Santiago Street, dating from the 17th century. It also has a two-body tower, the first made parallel to the temple, and the second, with an octagonal floor plan, a work of the 18th century with prominent Baroque forms.

Located between Sagasta Street and Armengual Street, this church owes its patronage to Bishop Lorenzo Armengual de la Mota, who ordered its construction with the intention of providing the La Viña neighbourhood with its own parish. It is a church with a Latin cross plan and a single nave, divided into four sections, which are separated by Doric pilasters, which in turn flank semicircular openings that give way to the various chapels on the side walls.

In the upper part we find tribunes established by the arches themselves, which open to the nave in the form of balconies. Each section of the nave is covered with a barrel vault, which contains openings that illuminate the interior of the temple.

The works for the realization of the temple took four years, and in 1878 it was remodelled, specifically its covers, by the architect Torcuato Benjumeda. All the interventions that were carried out throughout history gave this church a magnificent beauty, a sample of the creative activity of the city of Cadiz during these years, making it one of the best examples of religious baroque architecture in Cadiz, of which we can highlight its magnificent main entrance and its tower. 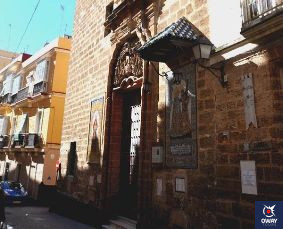 Popularly known as the church of San Pablo, this Catholic temple dates to the 17th century and was rebuilt in the neoclassical style in the 18th century. Its construction began in 1678 and was made possible by a donation from Jacinta Martinez de Susalaga. It was built at the same time as the Casa de Recogidas de Cadiz.

Its current neoclassical appearance is due to the reconstruction that was carried out in 1787 by the architect Torcuato Benjumeda, as the church was too narrow and a reform was planned to be able to worship the images of the Archconfraternity of Penance of Our Father Jesus of Ecce-Homo, Mary Most Holy of Anguish and St. John the Evangelist in an adequate manner. To complete your visit to Cadiz, it would be advisable to take a Free Tour with the best tourist guides specialised in the Pueblos Blancos.

It has a rectangular floor plan, with a single nave and an atrium, and a concave head with two choirs that are superimposed on the atrium. Its main altarpiece is of great beauty, made in Genoa according to the design of Manuel Tolsá in 1791. It is a church of great beauty and splendour that was made under the invocation of the fact of the Conversion of St. Paul, but also venerates the Virgin of the Tabernacle, the Heart of Mary, St. John the Evangelist and Our Lady of Sorrows. 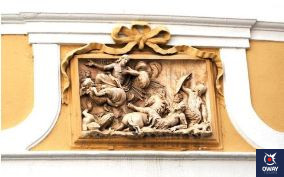