Summer in Ronda: An unforgettable holiday 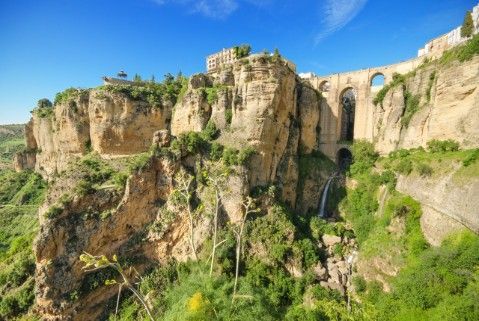 With a history riddled with bandits, fighters and rebels, the abrupt profile of the Ronda mountain range is synonymous with resistance and wild nature.

But not only its soul and indomitable presence serve as an attraction for the traveler: the art of bullfighting was forged here and, according to the story, the very same Orson Welles and Ernest Hemingway had fun here.

Between cliffs, echoes of the birth of the art of bullfighting, vigilante bandits and flamenco ‘quejíos’ (lament) you will spend an unforgettable summer in Ronda.

A journey through the soul of Andalusia

Ronda concentrates the passion and essence of Andalusia, making it the perfect destination to enjoy a summer holiday, with the following stops and activities along the way:

Revel in the views of the New Bridge: The symbol of Ronda rises majestically to challenge the vertigo of the cliffs.

Views from the ‘Pussy’ Balcony: Ronda is a challenge. For example, the known Balcony of the Pussy that hangs from the bridge to offer spectacular views of the Alameda del Tajo.

Getting lost in the attractions of the Old Town: The impressive Mondragón Palace with its Arabic and Renaissance architecture. The Plaza del Socorro square where the paths of the village cross to live to the rhythm of a local … are just some of the stops in the village. Just go with the flow to get to know a village that you can easily cross in a day.

Museum of the Bandit: An unusual museum that will steal your heart. Along its rooms you will discover the most famous bandits of the region, who stole from the rich, to give to the poor.

Ronda Bullring: Did you know that it is one of the oldest bullrings in Spain? And that it is considered the cradle of bullfighting?

The Wall, between heaven and earth: Rising above the profile of the mountain range, the wall protected Ronda, a key place in the Muslim conquest.

Unexpected surprise when going down the steps of the House of the Moorish King: With only the gardens as an open place to visit…the stairs lead up to the very bank of the Guadalevín River. Crystal clear waters and a stone gorge will make you forget the outside world.

Adrenaline rush in the zip-line: New Bridge + zip-line…equal to extreme experience. Because you can see the cliffs but also enjoy them.

Pleasures for the palate: To recharge your batteries between so much sight and history, nothing better than sitting on a terrace to enjoy a good ‘salmorejo’ or the delicacy of Ronda par excellence: ‘rabo de toro’ (oxtail).

As you will see, this indomitable village brings together the essence of the deepest and most unknown Andalusia.

What are you waiting for to come to Ronda?