The 7 most Beautiful Villages in Cadiz | OwayTours.com

The 7 Most Beautiful Villages in Malaga 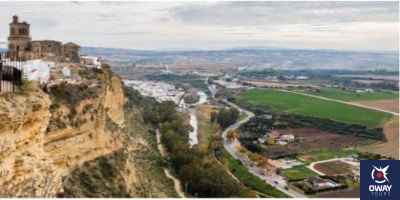 Cadiz is one of the most renowned provinces for its incredible beaches of fine sand that bathe the Atlantic, One example is the Caleta beach, one of the city’s attractions, which you can visit with our Cadiz Free Tour. But that is not the only attraction of Cadiz, because although it enjoys an admirable climate in many of its coastal areas, inland we find one of the rainiest places in Spain. Are you willing to discover the most beautiful corners of the province of Cadiz? Come along with us.

Setenil heads the route of the white villages of Cadiz. This route is a great attraction for anyone visiting the province and the best way to visit them is through the Visita Guiada Pueblos Blancos, don’t miss it.

This small town receives thousands of tourists a year and is an attraction because of its peculiar appearance. Some of its streets are located under huge rocks, in hollows of the Guadalporcún river gorge.

Once you arrive in this town, you must get lost in the white streets and discover what is called “Abrigo bajo Roca”, a unique and surprising sensation.

On the other hand, there are also historical buildings such as the church of Nuestra Señora de la Encarnación and the Castle of Setenil, in the highest part of the town centre. 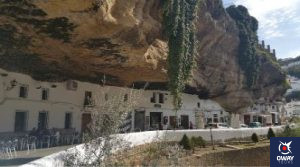 In the middle of the Sierra de Cádiz we find this town through which the Vía Verde de la Sierra runs, the only route declared to be of Tourist Interest in the Autonomous Community. Within its municipal area is the Peñón de Zaframagón, declared a natural reserve. There are countless outdoor activities on offer in this town.

It enjoys a great historical heritage, starting with the imposing parish church of Nuestra Señora de la Encarnación, as well as its Castle, which is almost completely preserved and dominates the highest point of Olvera from which the whole of the Sierra de Cádiz can be seen. 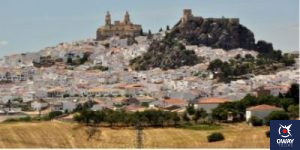 A town in Cadiz located on the second line of the beach. The best option to enjoy your holidays as it is located between the sea and the beach.

This town stands out for the wide history that we can find in the traces left by all the civilizations that have passed through here. Thus, we can find the Roman Archaeological Complex and the Roman road, popularly known as “the sewers”, is four metres below the Alamo street. Here you can see the urban fabric of the Roman city and a sewerage system.

On the other hand, you can visit the arch of Belen, one of the three doors of the Muslim medina and the church of Santa Maria la Mayor la Coronada, in the Gothic style of the 17th century.

Finally, in the highest part of the city, the Castle Archaeological Complex is located, where there are three superimposed fortifications. 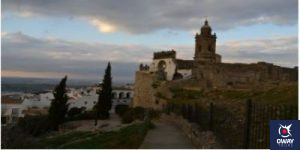 This village is at the top of the list of the most beautiful villages in Andalusia and Spain. This is due to its steep streets, the incredible views of the hill dominated by the river Guadalete, so viewpoints abound in this beautiful town.

Among the most outstanding places we find the Cuesta de Belén, access to the historical centre of Arcos de la Frontera. Here we find the monument to the Holy Week, a festival declared of National Tourist Interest.

The Basilica Menor de Santa María de la Asunción is one of the most important temples in the town. Its plateresque style façade and the bell tower stand out.

The Castle of the Dukes, formerly an Arab fortress, is now privately owned and can only be visited four times a year.

Finally, the balcony of the Peña Nueva, one of the many viewpoints that we find. From it you can see spectacular views over the river Guadalete and the surrounding fields. 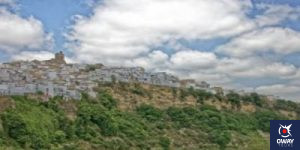 Cadiz is a province with a lot to offer, an example of which are all the towns that make up the province. Visit the website to find out more about the main city:

Also located in the Sierra de Cadiz, this village is outstanding for being in the Sierra de Grazalema Natural Park, next to the Zahara-El Gastor reservoir, so there are many outdoor activities on offer in this area.

Its historical centre is not far behind. It still preserves the medieval layout that goes up to the top of the rock where you can find its tower and Nasrid settlement.

Near the Town Hall Square is the Alameda de Lepanto, an old square with a stone fountain from which you can see fantastic views. 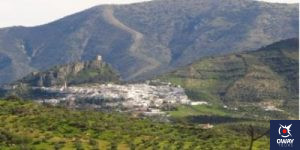 Grazalema, located at the highest point of the mountain range of the same name, is a tourist destination for lovers of hiking and nature.

It is formed by narrow streets with white houses and reddish tiles, surrounded by forest and with a microclimate that makes it the rainiest place in Spain. This area was the first Natural Park in Andalusia where the Spanish fir, a unique species in the world, grows.

The monumental and historical richness of the area is not to be overlooked, as is its historic centre, which has been declared a Historic Site due to the large number of churches in it.

The textile industry is of great importance, as shown by the museum dedicated to this and that you can miss to fully know this town of Cadiz. 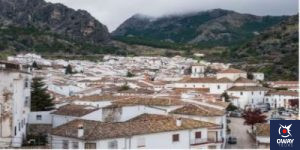 To end this list of fantastic villages in the province, we are now going to the Atlantic coast, to the town of Chipiona.

Birthplace of the artist Rocío Jurado, Chipiona is one of those towns that preserve the essence of Cadiz. We recommend you to walk along Isaac Peral street and the square, discovering those old bars and places where you can taste the most exquisite products of the area.

A visit to the Chipiona lighthouse is a must, as it is the largest lighthouse in Spain and one of the largest in the world. A total of 322 steps and 69 meters high. From here you can see the immense beaches of the coast.

Finally, the most precious jewel of Chipiona, the Sanctuary of Nuestra Señora de Regla which houses the patron saint of the city and one of the greatest devotions in Andalusia. It is located next to the promenade and offers unbeatable views. 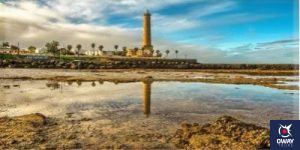