The 7 most Beautiful Villages of Malaga | OwayTours.com

The 7 Most Beautiful Villages in Malaga 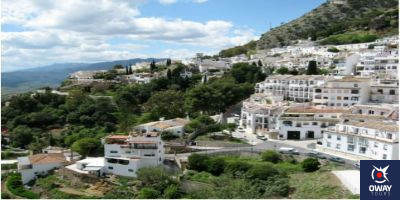 Malaga’s best known attraction, and the one that attracts most visitors throughout the year to this province. It is the well-known sun and beach tourism. But does the province have anything else to offer? Of course it does, the interior and other less known parts of the coast offer the visitor cultural experiences. Those who prefer to disconnect from the crowds and opt for magical places to enjoy the peace and quiet. Here are some of those villages not so well known but with the quality you are looking for.

This small town in the Axarquia region of Malaga (the easternmost part of the province) has been awarded the Historic-Artistic Site award and is one of the few to be included in the list of the most beautiful towns in Spain.

It stands out for the interweaving of streets with whitewashed facades that make its historic centre a dream place.

As a cultural activity, Frigiliana has the Archaeological Museum of La Axarquía, made up of more than a hundred pieces from the Neolithic period to well into the 16th century. These vestiges have appeared in the localities of the area.

On an environmental level, this town has areas such as the Santa Fiora Botanical Garden, opened in 2010, and part of the Sierras de Almijara, Tejeda and Alhama Natural Park, recommended for all nature lovers. 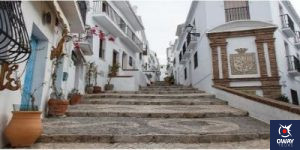 If we go to the Serranía de Ronda, we find this small village that became famous for the film of the Smurfs. For this occasion, the facades of all the houses were painted blue and once the film was shot, it was left that way because of the tourist attraction.

It is a highly recommended place to visit with children as its streets have been converted into a small amusement park. You will be able to find zip lines, climbing walls, bridges and many more activities to do outdoors. 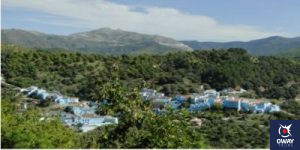 We continue to the Serranía de Ronda, this time in the Genal Valley to visit the village of Arab origin of Alpandeire.

The Capuchin monk Friar Leopoldo was born here and grew up there until he was 36 years old, so it is highly recommended to visit his Birthplace. It has been adapted so that the visitor can get to know how people lived in the second half of the 19th century. It is open to the public on weekends and holidays.

This town also stands out for housing what is known as the Cathedral of the Serranía, the church of San Antonio de Padua, known for its large size and dimensions in contrast to the small town. 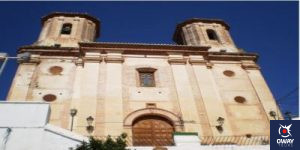 The villages of Malaga alone are one more reflection of the beauty that masks the province par excellence of the Costa del Sol. Click below to learn more about the capital:

If you prefer to mix the beach with the interior, who says you can’t? Nerja is your place. This coastal town of Malaga is known as the balcony of Europe because it opens up to the Mediterranean as an embrace of the sea.

It has more than 10 beaches in its urban area, the most visited being Burriana. But it also has the route through the Cahorros del río Chillar, one of the activities that will make you know the flora and fauna of this area.

Finally, you cannot leave this town without visiting the Caves of Nerja, declared a Site of Cultural Interest in 2006. It is 42 thousand years old and has the largest stalactites in the world. 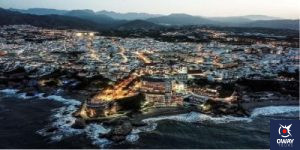 Without leaving the coast and very close to the capital of Málaga, we find this white village divided in two: Mijas Pueblo and Mijas Costa (more commercial area). Furthermore, it is not far from the provincial capital, Malaga. You cannot leave without visiting this incredible city, we offer you the Malaga Free Tour, it will be an unforgettable experience.

The monumental area has places of great value such as the church of the Immaculate Conception, XVI and XVII centuries, as well as the bullring characteristic for its oval shape and the Constitution Square, surrounded by whitewashed buildings and in the lower part of the wall.

Finally, the Cuevas de la Antigua Fragua, natural caves in the centre of the town of Mijas which were used as a larder as they maintained the temperature. They are open to the public. 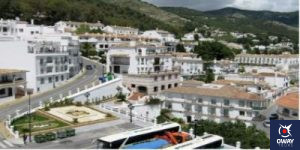 Standing on a hill is this Malaga town, from which you can see the mountains and the adjacent mountains.

Like Alpandeire, its Arab origin can be seen in the Aljibe de Maxmúllar (14th century) or the Arab arches that can be found in its streets. The cultural visit is undeniable due to the number of historical sites it houses. Some of them are the old wall of the Comares Castle, the Verdiales square or the three fountains that were used to collect water and that nowadays remain as a monument and a memory.

The main door to the town is still standing, it is the Puerta de Málaga and was an important defensive bastion. As can be seen in the choir stalls of the Cathedral of Toledo. It was here that the keys to the city were handed over to the Christian forces. 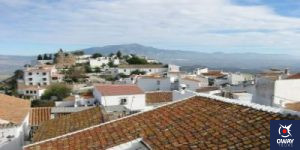 On the border with the province of Cadiz we find this town of white houses. Located on a hillside dominated by the church and the remains of the fortress that once defended the town.

The spectacular Roman baths of La Hedionda are located in this area. In addition to the Birth House of Blas Infante. It is edicated to the history, biography and bibliography of the author, showing different aspects of Andalusian life in the 19th century.

The 16th century church of La Encarnación has panoramic views from the Serranía de Ronda to the bay of Algeciras. You should not miss it. 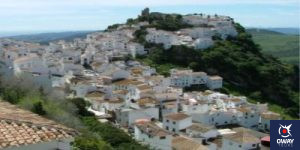