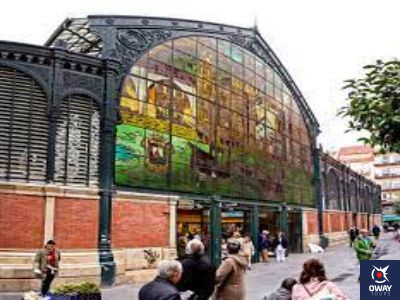 Strolling through the centre of Malaga we can find the Atarazanas Market. This place will surprise you with its nineteenth-century architecture, with some elements from the Muslim period. It is also one of the most important commercial centres in the city. Come with us and immerse yourself in its history, we will guide you to it, and you will discover what you can find.

This site dates back to the 14th century when it was occupied by the Nasrid shipyards. Although today it is located in the centre of the city, during that period it was right on the edge of the sea. This can be a little confusing, so we would like to clarify that part of Malaga was submerged under the sea.

During the reign of Mohammed V, in the 14th century, the shipyards were built, making it one of the largest and most impressive buildings. Its façade was very characteristic, as it was made up of seven horseshoe arches. Today, of the seven only one remains, which was declared a Monument of Historical Influence in 1978. Above this arch are two Arabic coats of arms that read ‘God alone is the victor, glory to him’.

This place quickly fell into disrepair. It was not until 1487, the year in which Malaga was conquered by the Catholic Monarchs, that the premises were used. It was first a convent, then a military barracks, a hospital and even a school.

Centuries later, in 1870, a project by Joaquín Rucoba was approved. This idea arose from a proposal by the town council to create a covered market to regulate the sale of fresh produce. The architect conceived a building with an irregular floor plan, with two wings joined by a central body.

The first official name for this market was Mercado de Alfonso XII. But from the very first day all the citizens called it Mercado de Atarazanas.

Finally, between 2008 and 2010 a refurbishment work was carried out. This allowed the renovation of the structure of the points of sale, and the raising of the ceilings. In addition, the nineteenth-century appearance was restored, despite the numerous changes that took place during the twentieth century. 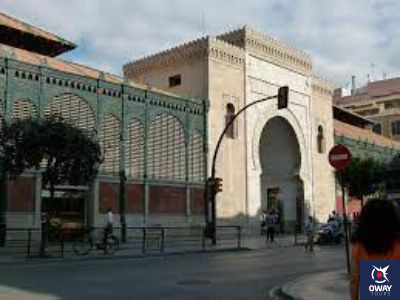 The Atarazanas Market in Malaga is located at Calle Atarazanas, number 10. To get there you can take the following bus:

We can take the bus lines number:

We can get off at the stops:

The metro: 1, 2, in the Perchel station, 15 minutes walking distance.

On the other hand, if you go by car you will be interested to know some of the car parks in the area. For example: Programallo, Programallo, Parking Málaga, or Underground parking, among others.

We have to take into account the opening hours of the market, which is open from Monday to Saturday from 8am to 2pm. 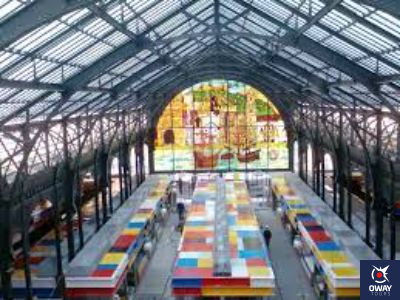 Although if we are already visiting the city and we are in the Plaza de la Marina, we will find the market just 5 minutes walk away. On the other hand, if you are walking along Calle Larios and the Cathedral, it will only take you 10 minutes. In this case we are in the best area for our city tours, no waiting, no queues! What do we recommend? Our tour of the Caminito del Rey or our Free Tour!

What can you find in the Atarazanas Market?

Nowadays, the Malaga Market is a building with a nineteenth-century industrial appearance, with numerous neo-Arabic historicist details on its façade. This market is divided into two clearly differentiated areas. On one side is the food market, divided into meat, fish and fruit and vegetable areas. On the other side there are bars, tapas stalls and outdoor terraces. This last area has only been here since the reform of the beginning of the century, becoming a kind of attraction of the Gastronomic Malaga.

In the market we can find stalls with basic products or more gourmet products. For this reason we would like to let you know the most popular places and products:

But they are not the only ones we want to show you, you also need to know the best places to eat in the Market and their specialities: 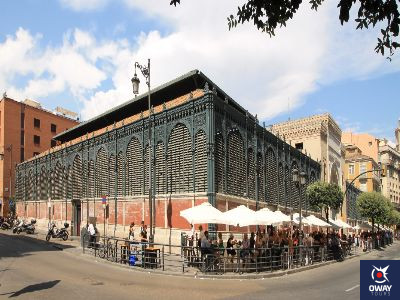