➤Which souvenirs to buy in Ronda? | OwayTours.com

The best gifts and souvenirs from Granada

The best gifts and souvenirs from Cordoba

The best gifts and souvenirs from Ronda

Ronda is one of the loveliest villages in the province of Malaga. All the tourists who visit it end up completely in love with it. Its viewpoints, its streets, its buildings, etc. have a special charm that you will not find anywhere else.

If you decide to travel to the south and visit this town in Malaga, then we tell you the little details that you can buy in Ronda as a souvenir. We hope you won’t be hesitant, because you will like them all!

Ronda has a forest that provides them with a lot of raw material and wealth. The forest has always been an economic support for the people of Ronda, both for gastronomy and for handicrafts. At the beginning of the 20th century the School of Arts and Crafts of Alfonso XIII was created after a commission to restore La Casa del Rey Moro (the House of the Moorish King).

Since then, there are very good artisans who make handmade wood products and even the denomination of origin has been requested. That is why you can’t leave Ronda without knowing its craftsmanship and if you can, buy some wooden souvenirs that characterize this village.

The women of Ronda have also practiced the art of pottery for many years. The cooperative formed by women who came out of the Escuela Taller de Ronda, make a very typical ceramic craft in the area. Over the years, it has evolved into a white pottery.

As you may know, Ronda is a very bullfighting town that has lived and still lives thanks of the profits generated by the spectacular bullring. But nowadays, unfortunately, there are less blacksmiths in Ronda.

You can find all kinds of traditional products made by expert craftsmen around the bullring and at the end of Espinel Street, or also called with much affection by the people of Ronda, La Bola Street.

This tradition comes from a town called Cortes de la Frontera. In the old days, the women used to make their household goods with these materials brought to them by their husbands from the forest, which, as we said before, provided them with a lot of raw material.

They used to make shoes, shopping bags, etc. and although nowadays there are very few people who live from this, you can still find in some shops in Ronda some products made of cork to decorate the homes. 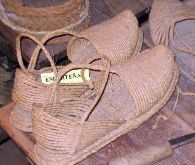 A group of nuns, more than 200 years ago, extracted the juice from some centenary olives that were in some farms very close to Ronda. At first, this was not very successful as it was not appreciated as it should be.

Today, one of those oils that are marketed worldwide is among the top 20 of the best Spanish oils, below the Jaen. Try one of their extra virgin olive oils; you won’t be able to resist buying a little bottle as a souvenir

The gastronomy in Ronda, as in almost all Andalusian villages, plays a very important role. Here there are high quality products made by authentic rondeños. It is almost an absolute must to try the Iberian pork meat, the goat cheese with almonds and many of its famous desserts that you will only find here.

And if you are one of those who like to give away bottles with alcohol characteristic of the place, you are more than lucky. In Ronda they make a homemade liqueur similar to cherry brandy. It sounds too good not to try it!

In Ronda, as in all cities, you can also find the typical little souvenir shops where you can find the most characteristic products of Ronda, but also of Malaga, Andalusia and even Spain.

–fans: it is very common that in any Andalusian souvenir shop there is a wide repertoire of fans. Take this opportunity to buy one with some typical Ronda prints with the bullring, the views of the Tajo…

–magnets: of course this can’t be missed! What travelling family doesn’t collect refrigerator magnets! Don’t miss yours from Ronda. Try not to despair, because you may find yourself in the position of having to choose between dozens and dozens of them.

–flamenco dancers and bulls: another Spanish cliché. The bull plays an essential role in the culture of Ronda. In the area of the bullring you will find figurines of bulls and everyone around them.

–snowballs: the other great collectible souvenir that is never missing. If you are one of the collectors of these, here again you are in luck. You can choose one with the images of the “snowy” bridge or any of its spectacular viewpoints.

–postcards: one of the essential ones. It goes without saying that Ronda offers some of the best landscapes you will see in Spain and in the world. That is why you should take a postcard with you to keep forever, not only in your mind, but also on paper, an image of one of the most beautiful villages in the world.