Cathedral of Seville: The essence of Gothic in the world - Oway Tours

Cathedral of Seville: The essence of Gothic in the world 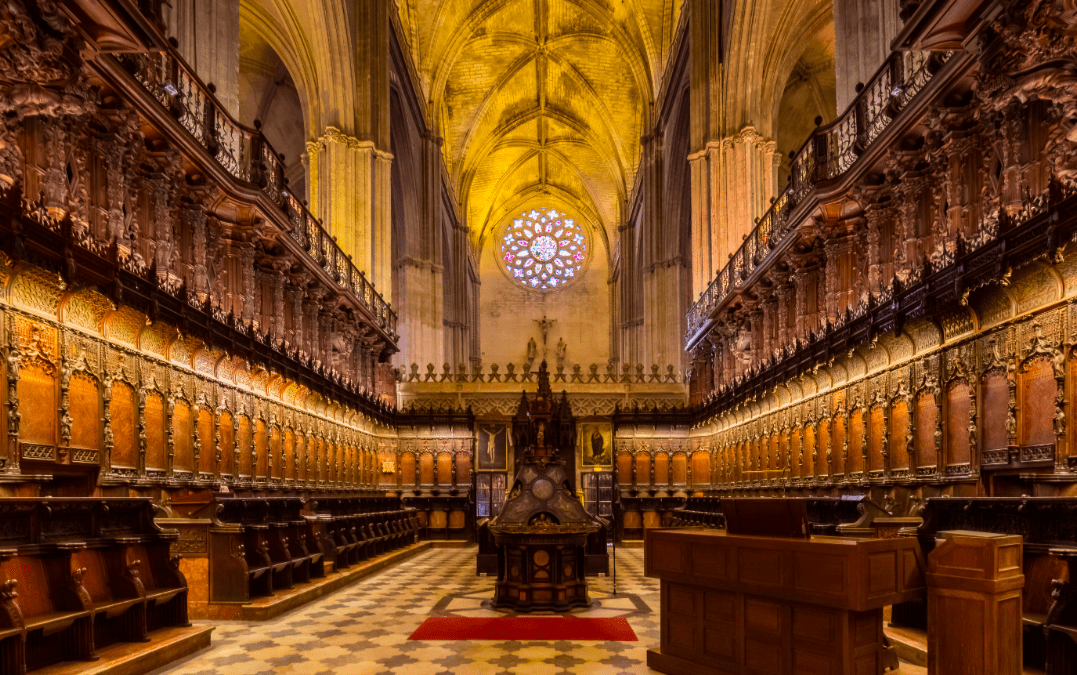 Speaking of Seville is to speak of its legendary cathedral. Considered the largest Gothic temple in the world and the third largest overall, only surpassed by St. Peter in the Vatican and St. Paul in London.

The tomb of the selfsame Christopher Columbus. A privileged view of the city with the most intense color in Spain. Echoes of his past as a Mosque in the Patio de los Naranjos… and of course: La Giralda, the beautiful girl of Seville-and of Oway-. These are just some things you will find in the Cathedral of Seville, a monument that you must visit at least once in your life.

Would you like to know more about the Cathedral of Seville? Today we are taking you on a tour of some of the secret of this gem, although, as always, some will be kept under lock and key forever… don’t miss it.

The essence of Seville in a cathedral

The cathedral in Seville is much more than a stop monumental on the way –it is part of the city’s personality, which is crowned like a scepter that holds part of his past, present and future.

With this cocktail as a base, we add the experience of being able to enjoy Seville from a bird’s eye view, not suitable for people with vertigo…

The beginning of a feat

A mosque built in the 12th century was the embryo of the cathedral we know today.

Conceived to demonstrate the power of the Caliphate, a century later it would pass into the hands of Christianity and become a center of Christian power with the integration of the impressive old minaret as part of the complex.

‘A temple so big that those who see it finished consider us crazy.’ Cabildo

What will you find in the Cathedral? Truthfully, stimuli, many stimuli. With brightness, splendor and beauty in every corner, you will have to take a breath after the initial shock and then let yourself be carried away by its main stops:

Ten gates as ten suns: With the Gate of La Asunción (The Assumption) as the protagonist, the cathedral has other gates with names -and stories- as curious as El Perdón (The Forgiveness), El Triunfo (The Triumph), El Príncipe (The Prince) …

Main Altarpiece: Did you know that it is one of the biggest in Christianity? Nothing but an altarpiece of polychrome wood of 400 meters in surface with the representation of more than 200 figures of different Saints.

Tomb of Christopher Columbus: It is undoubtedly the objective of the pilgrimage of many travelers. A simple but imposing tomb crowned by four allegorical figures.

Panoramic from the façade: You can go up to enjoy breathtaking views of the city.

Patio de los Naranjos: Light, peace and shade for the trees to rest from so much historical beauty…undoubtedly an oasis inherited from its past as a mosque.

Giralda: Well, to introduce the main minaret of Seville there is no need for more words… if you want to know more, in this post we tell you curious things.

In short, the cathedral is one of the reasons why Seville was chosen by the prestigious travel portal Lonely Planet as the best destination to visit in the world. With this information in your power…

What are you waiting for to explore Seville?