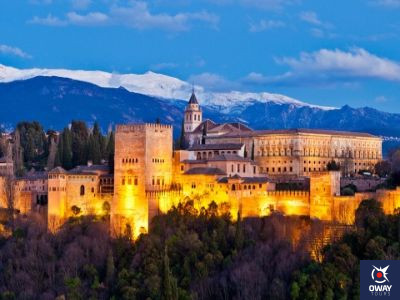 Granada is a city where many travellers spend the night, as it is usually a destination where you can end your day of sightseeing after visiting other nearby destinations.

The centre of Granada and the Albaicín are the most charming areas, which is why they are a good option when choosing a hotel, as you can visit some of the most emblematic places in the city at the same time as you stay there.

Below, we recommend the best hotels in the Nasrid city, are you going to miss it?

This hotel is characterised by the suggestive combination of two buildings: the Palacio de los Patos, an elegant reconversion of a 19th century palace of classical architecture listed as a BIC (Bien de Interés Cultural), and a new building, Edificio Alabastro, which fuses depths and transparencies.

The hotel offers elegant and majestic accommodation within walking distance of Granada Cathedral. The rooms are distributed between the two buildings mentioned above, and can be booked on your own or as part of a package tour, adding other attractions in the city.

It has free WI-FI throughout the complex, and pets are welcome and accepted throughout the hotel. It also offers a private parking service for its guests, and electric car charger.

Finally, it is worth mentioning that guests can enjoy an incredible spa where they can achieve absolute wellness and revitalise both body and mind. It includes a Turkish bath, dry sauna, relaxing hydro-massage pool, changing rooms and toilets.

One of the highlights of the city is the aforementioned Cathedral, so we invite you to take the Cathedral and Chapel Guided Tour where you will contemplate elements of the great history of Granada. 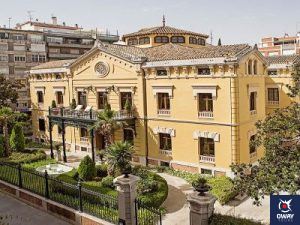 The Alhambra Palace was awarded its fifth star last year, making it the oldest five-star hotel in Spain, having opened in 1910. It is located next to the Alhambra, hence its name, and offers guests a luxurious stay with incredible views of Granada. It has ostentatious rooms which have everything you need to make you feel at home.

In addition, it has an elegant restaurant where you will be served delicious dishes, and a bar, where the best cocktails in the city are prepared and you can enjoy them on a terrace while you enjoy the Granada landscapes.

In this hotel, you also have the possibility of celebrating a special event, as it is the setting for banquets with high and varied cuisine, with capacity for up to 200 guests.

Finally, it is a hotel that allows pets in the rooms, something very important for those who want to travel with their pets. 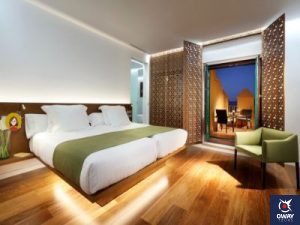 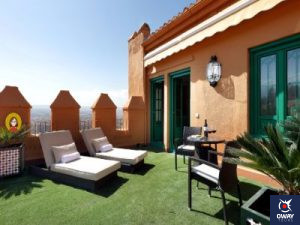 This is also a five-star hotel. It is located in the former 16th century convent and 12th century Moorish house in the historic centre of Granada, close to the Albaicín and Sacromonte area, the Cathedral and Royal Chapel, the Triumphal Gardens, the Archaeological Museum and, of course, the Alhambra.

It has 75 rooms ranging from standard single rooms to the Bishop’s Suite, from a descending to ascending price respectively, and has been declared a historical and artistic monument.

The hotel’s restaurant, called the Claustro, is excellent, offering everything you could ask for. It fuses elements of traditional Andalusian gastronomy with modern culinary techniques. Even so, the bars and restaurants of the centre of Granada are just a few minutes walk away.

The hotel has free WI-FI connection in all rooms and common areas 24 hours a day.

Since you are staying in this incredible hotel, we recommend you to take the Albayzín and Sacromonte Guided Tour, as well as being very close, you will be able to discover the magic of two of the most important neighbourhoods of Granada. 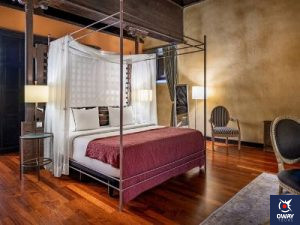 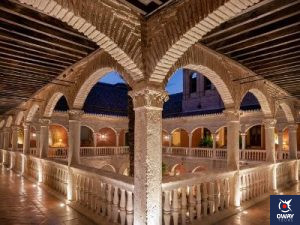 This three-star boutique hotel considers itself to be a ‘pilgrims’ hotel’, as in ancient times it was an inn where pilgrims stayed on their way to Santiago de Compostela.

It consists of 15 rooms, characterised by high ceilings built with oak beams and individually decorated with a combination of classic and modern elements.

The hotel has free WI-FI connection in all its facilities. At about 100 metres from the hotel, you will find its private car park, which you can use at no extra cost.

If you are passionate about reading, at the Gar Anat Hotel Boutique you can enjoy a fabulous library where you will have free tea and coffee service from 17:00h to 22:30h.

In contrast to other hotels, this one has a wide range of pillows, so that guests can choose the one that best suits their needs. You will also have the possibility of contracting a massage service in your own room, carried out by the best professionals. 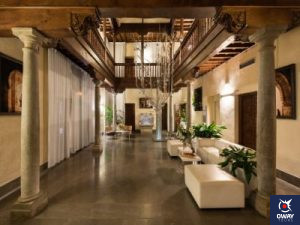 Once you arrive at the Hotel Casa 1800, you disconnect from the outside world and enter a relaxed and peaceful atmosphere. It is on the side street at the foot of the Albaicin, and although it only has 25 rooms, it is worth discovering each of its facilities. Its best rooms, Deluxe and the 1800 suite, have magnificent views of the Alhambra, giving you the best start to your day.

This hotel, every day offers its guests a free snack that is equivalent to afternoon tea or coffee, thus receiving an intimate and special treatment making your stay a unique and unforgettable experience.

If you are planning to travel by car, the hotel does not have its own private car park, but there are several covered public car parks in the immediate vicinity.

Due to its location, it has an ideal situation to move on foot to the most emblematic monuments of Granada, as well as to the most outstanding points of interest, such as the Cathedral, flamenco shows, museums…, among others.

It is also close to the most famous tapas bars in Granada, where there is always a festive atmosphere worth enjoying. 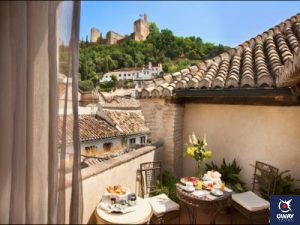 In addition to all of the above, we recommend that on your trip to the Nasrid city and in order not to leave any place unvisited, you take the Guided Tours in Granada and the Free Tour in Granada. Both are wonderful experiences!