7 Most Beautiful Streets in Cordoba

The Most Important Streets of Seville 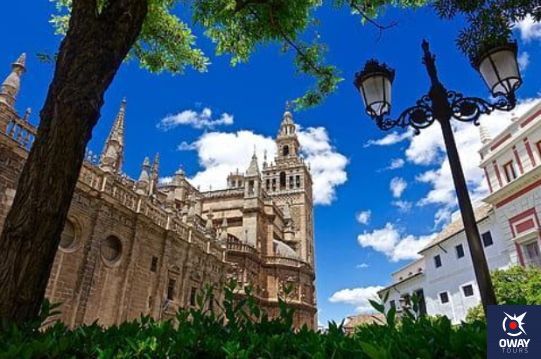 The Andalusian capital has very emblematic streets with their own idiosyncrasy. Seville, being one of the most visited cities in Spain, is also one of the most beautiful. Within its historic centre, one of the largest in Europe, we can find monuments and emblems of the city such as the Cathedral, with its old minaret converted into the bell tower of the Giralda, the Torre del Oro, the Santa Cruz district, the church of El Salvador, the Archivo de Indias, the Jardines de Murillo …

But, in addition to all this, the streets of the city of Seville are another of its highlights. Plenty of examples of Mudejar architecture and traditional buildings merge to bring you some imposing and beautiful streets that we will reveal in this article.

Located in the Triana neighbourhood, bordering the Guadalquivir River on the shore opposite the historic centre, we find Betis Street, one of the most emblematic streets in all of Seville. Characterized by its colourful buildings of different styles, also has a variety of restaurants with nice terraces where you can taste the cuisine of Seville with full views of the Torre del Oro. From there we can see the river and the city centre, and it is also a regular meeting point with friends to have a few drinks and dance sevillanas in traditional places.

At the end of Betis Street, we find the Isabel II Bridge or “Triana Bridge”, commonly known among its inhabitants, and in the north, the San Telmo Bridge. Its denomination as “Betis” refers to the name with which the Guadalquivir River was known during the Roman period. The street was progressively formed with buildings of houses since the Middle Ages, constituting the original nucleus of Triana.

It is worth mentioning that you can enjoy these views exclusively thanks to several guided tours in Seville available in the city, among which you can find a Free Tour in Seville during the day and the night tour “Secrets of Seville” that garantee to make the most of your walks by the Guadalquivir River as it crosses through Seville. Moreover, thanks to their proximity, you can also join not only the guided tour to the Cathedral and the Giralda, but also to the Real Alcazar of Seville. Of course, all this accompanied by the best local guides! 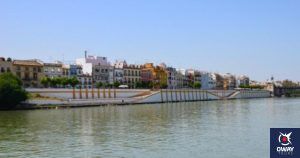 It is one of the few popular streets that still has its local shops, restaurants, stores, and inhabitants. It has the traditional Feria Market, one of the most charming in all of Seville. This street is located between the Macarena and the Alameda de Hércules, within the historical centre. It has shops, bars, and a lot of life on the part of its inhabitants, and its Sevillian inspiration is very marked, being also one of the most recommended streets to fully enjoy the Holy Week.


The name of this street is due to the Thursday market, which has been held since the 13th century and is the oldest in the city. Nowadays the sidewalks of the streets are filled with small stalls where antiques and all kinds of second hand objects are sold. Despite this, it is known that historically all kinds of items were sold. 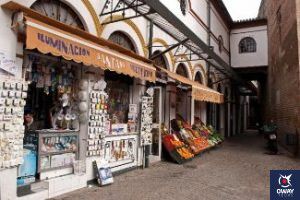 Historically full of singing cafés, they no longer exist, but many traditional and local shops are still oriented towards embroidery, fans, and confectionery, although gradually the multinationals and franchises have made their way in. However, the traditional architecture has remained intact, with beautiful historical buildings worthy of admiration. It receives a great flow of people and is kept very much alive, as it connects with the Alfalfa, the Campana, the Arenal and the Tetuán street.

Popularly, it is said that its name is due to an urban legend that placed a snake in the sewers of the area, something that has been related by the historian José María de Mena, who recounts the historical fact of a great disappearance of children during the 15th century that were finally attributed to this strange monstrous apparition. 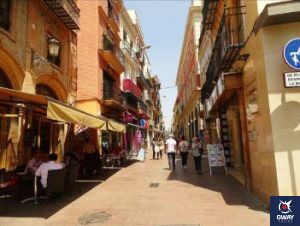 Located in the Santa Cruz district, at the exit of the Patio de Banderas and towards the Jardines de Murillo, we find the network that makes up the Callejón del Agua, with its labyrinthine and medieval appearance, typical of past centuries. It was built to prevent the entry of the scorched sun in Seville, generating currents of fresh air that cooled the city.

It is one of the most emblematic streets of the labyrinthine Jewish quarter, made up of pedestrian tunnels and promenades that are organized around the old wall, and which have fountains on its walls. It is one of the most singular and curious streets to see in the whole city. It is 140 meters long and is what is technically known as an adarve, that is, a street that runs parallel to the city wall. Inside it had two pipes that carried water from the Caños de Carmona to the gardens of the Reales Alcázares. 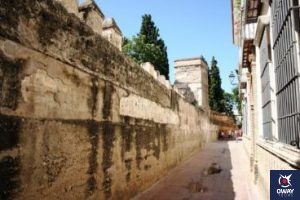 This street serves as the main entrance to the Santa Cruz district, located next to the Cathedral and the Giralda. It is one of the most visited and busy streets in all of Seville, full of restaurants, typical tapas bars and shops aimed at tourists and visitors, and ends at the Plaza de la Virgen de los Reyes. From this street you can get the best views of the Cathedral.

Until the 18th century, the guild of borceguineros, shoe makers and borceguíes lived there, and in 1893 it received its current name. It was so to honour the memory of the Sevillian professor Mateos Gago, who taugth in the Faculty of Theology at the University of Seville. This is because he was born at the number 21 of this street. Also, on the façade of this historic house there is a commemorative plaque which reminds us of the event. 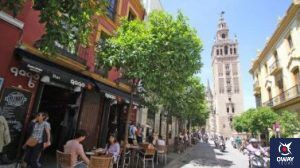